60
Shares
Facebook23Twitter15WhatsApp3Telegram1
Linkedin1Pinterest5Tumblr1
Ranveer Singh with mom Anju Bhavnani and wife Deepika Padukone.Mumbai: Ranveer Singh's new film Jayeshbhai Jordaar, out this week, is comedic in tone but the subject it deals with is of the utmost gravity - foeticide. The actor stars as the titular Jayeshbhai, a mild-mannered Gujarati father of one daughter with another on the way.… 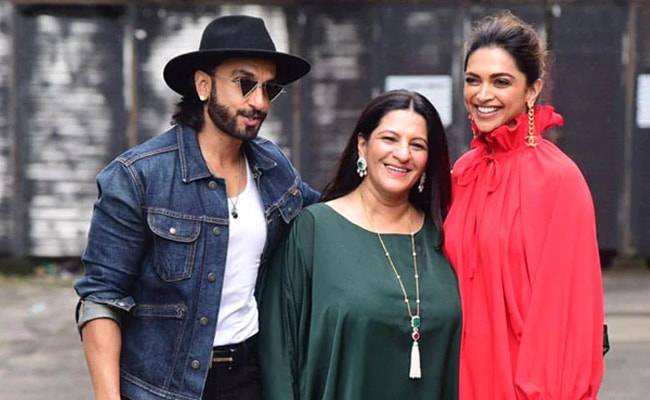 Ranveer Singh’s new film Jayeshbhai Jordaar, out this week, is comedic in tone but the subject it deals with is of the utmost gravity – foeticide. The actor stars as the titular Jayeshbhai, a mild-mannered Gujarati father of one daughter with another on the way. Jayeshbhai has to stand up to his father and others bent on aborting the unborn baby and Ranveer is perfectly qualified to take on the patriarchy having been “raised by women,” as he told NDTV. In fact, he has a list of “strong feminine forces” in his life – wife Deepika Padukone and mother Anju Bhavnani, of course, but also his grandmother, sister Ritika and mother-in-law Ujjala Padukone.

In his interview to NDTV, Ranveer Singh recounted growing up surrounded by female influences. “Perhaps the greatest blessing in my life is that I have angels around me,” Ranveer said, “They’re the centerpiece of my whole universe. You know, the women in my life, I’ve grown up with my mom, nani, my sister who’s like a second mother to me, and now Deepika, my mother in law. These strong feminine forces around me, empower me, you know, they uplift me, they protect me, they are my angels, they are my source of energy and power and joy.”

“I am what I am because of them,” Ranveer told NDTV, “And having been raised by women… I grew up to be sensitive.”

As Jayeshbhai Jordaar, Ranveer is very much on the female side of the patriarchal divide; the role also gave him a deeper understanding of fatherhood and, specifically, of his own father Jagjit Bhavnani. “My dad was always in the pursuit of being the protector and provider and it’s through Jayeshbhai Jordaar, that I have a deeper appreciation, love and respect for him that I’ve never had before. Because I’m not a father yet but I’m playing a father. So to get to the depths of what that character might be feeling, I had to explore and go transport myself back to parts of my life, components of my life, where I would have experienced that, and I was taken back to the way my dad has been a man who would do everything in his power and capability and pour every ounce of effort and energy into being the best protector and provider for his family,” Ranveer said.

Boman Irani plays Ranveer’s father onscreen – Ramlal Patel, with whom Jayesh must do battle to save his second daughter’s life. The cast includes Shalini Pandey as Jayesh’s pregnant wife and Ratna Pathak Shah as his mother.