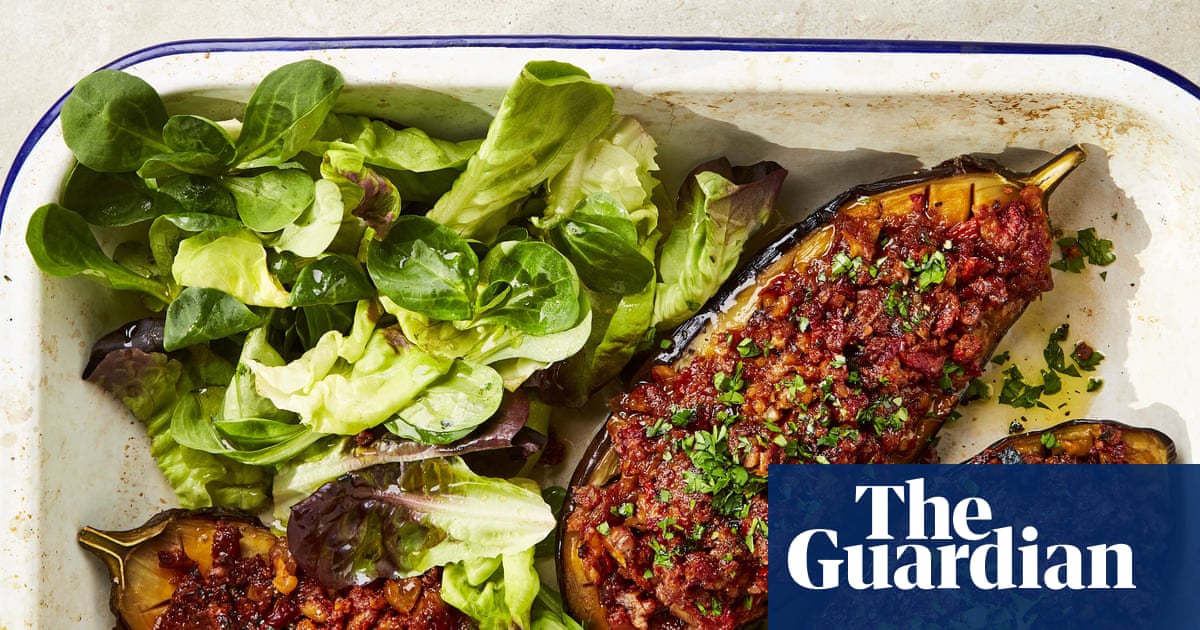 The aubergine has an air of mystery to it until it hits the oven. Various food writers over time have argued over whether it should be salted to remove any bitterness (it shouldn’t) and whether it needs drenching in oil to cook (it doesn’t), but, when cooked in the oven, there’s only one way the aubergine will go, and that is creamy – and, because of that, a baked aubergine is as popular in my house as a jacket potato. The only thing up for debate is what to stuff it with. Here, I’ve used walnuts and peppers, loosely inspired by the Levantine dip muhammara.

I have (finally) switched to reusable silicone baking liner, which works brilliantly. There’s a lot of (potentially therapeutic) chopping with this dish. Get your best knife out and keep running your knife back and forth over the pepper and walnuts until they’re very finely chopped.

Heat the oven to 220C (200C fan)/425F/gas 7 and line a large baking tray with greaseproof paper. Score the flesh side of the aubergine halves in a criss-cross pattern and brush both sides with oil. Lay on the tray flesh side down, and bake for 25 minutes, until the flesh is softening, then remove (but keep the oven on).

While the aubergines are baking, make the filling. Heat four tablespoons of oil in a large frying pan over a medium heat. When hot, fry the onion, stirring, for about 10 minutes, until soft, golden and translucent, then add the garlic and walnuts and fry for three to five minutes, until fragrant.

Stir in the tomato puree and chopped peppers, fry for three minutes, then add the cinnamon, cumin, paprika and salt and fry for another three minutes. Add the breadcrumbs and cook, stirring, for a couple of minutes, then hydrate with about eight tablespoons (120ml) of water and take off the heat.

Distribute the onion mixture across the aubergine halves, packing it down and into the cuts in the flesh, then return to the oven for 20 minutes, until the top of the mixture starts to catch and brown. Serve with a sprightly, leafy dressed salad.

Paris Lees: ‘It drives me crazy when people introduce me as a trans activist’

One year on, how George Floyd’s murder has changed the world

Drivers should steer clear of the C-word | Brief letters

Nettles are hard to grasp out of season | Brief letters

Boris in isolation? There is a God after all | Brief letters