58
Shares
Facebook22Twitter14WhatsApp3Telegram1
Linkedin1Pinterest5Tumblr1
Rajeev Chandrasekhar said Pfizer tried to "bully" Centre and Congress "trio" pushed for foreign vaccines.New Delhi: The Congress on Sunday accused Union minister Rajeev Chandrasekhar of distorting facts and indulging in "false propaganda" by alleging that the leaders of the opposition party were pushing the case of foreign vaccines after the COVID-19 pandemic broke out… 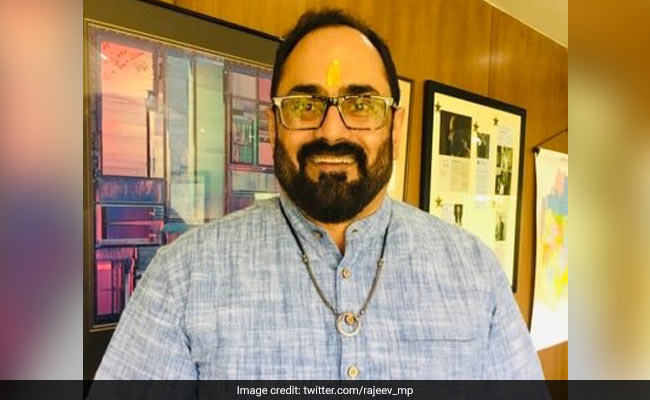 The Congress on Sunday accused Union minister Rajeev Chandrasekhar of distorting facts and indulging in “false propaganda” by alleging that the leaders of the opposition party were pushing the case of foreign vaccines after the COVID-19 pandemic broke out and demanded his apology.

The Congress also wrote to Twitter against Mr Chandrasekhar’s “false propaganda” and to get his tweet blaming the party leaders removed, while seeking action against the minister.

I have written to the Minister @Rajeev_GoI who made outrageous charges against my colleagues and I. My colleague @SupriyaShrinate has written to Twitter also separately. pic.twitter.com/SWAsZzNYNE

“We can understand that for a regime built and sustained through propaganda, why you would feel compelled to make such a distorted and malicious statement. Thus, on the merits of your claim, there is little to say other than it is complete falsehood. At no point did any of the senior leaders that you named make any comment or observation on the indemnity clause,” the Congress leader wrote to the minister.

“We call on you to apologise, clarify and take down the tweet immediately, otherwise we will be constrained to pursue legal action. Your actions are unacceptable and you must be held accountable for spreading false and misleading information,” he said.

The Union minister of State for Information Technology had, in a tweet on January 20, said: “Just to remind all Indians that Pfizer tried to bully Govt of India into accepting conditions of indemnity.” “And Cong trio of Rahul, Chidambaram and Jairam Ramesh kept pushing case of foreign vaccines during Covid,” he had said.

Mr Chandrasekhar had also shared a video on Twitter of Pfizer CEO Albert Bourla being asked some critical questions by reporters in Davos on the company’s anti-Covid vaccine.

Mr Ramesh, who is the chairman of the Parliamentary Standing Committee on Science and Technology, Environment, Forests, and Climate Change, pointed out in his letter to the minister that a meeting of the committee was held on June 23, 2021 on vaccine development for Covid and genetic sequencing of the coronavirus and its variants to discuss Indian advances in vaccine production, which are documented events, and said he should educate himself on the issue before making “malicious and uninformed statements”.

“During the second wave of the pandemic, when India reeled under the crisis, when people, including your supporters, tagged their government representatives and begged for support, what did your government do? Families lost loved ones, hospitals were filled to capacity and the nation was in chaos. Your government’s handling of the crisis became a cautionary tale that came at a great cost to the people of India,” he said.

“Furthermore, at a time when your government was in panic mode, it was the Indian National Congress which stepped up and offered to pay for the train tickets of migrant workers, who were stranded and in dire need of assistance,” Mr Ramesh said.

The former Union minister added that in a democracy, especially at times of crisis, the government must work with the opposition and not turn every issue into a point of false propaganda or point-scoring.

The opposition has a constitutional right to question the administrative delays surrounding the vaccination drive, vaccine procurement, selection and distribution, “which is what we did in general terms and what we stand behind”, he said.

“But to suggest that the leaders asked for relaxations of crucial safeguards is a complete distortion and misrepresentation of the reality,” the Congress leader said.

“Your post undermines the most basic principles of democracy and fairness. It seeks to absolve your government of any responsibility for its mishandling of the Covid crisis and the resultant loss of lives, to say nothing of the economic devastation.

“We also find it deeply concerning that a minister of the government of India would make such false and baseless accusations without any evidence to back them up. Such actions are expected of online trolls, not of ministers of the government who are supposed to be held to a higher standard of conduct,” he added.

“The tweet in question is dangerous because it seeks to present a manufactured, distorted narrative of the political opposition from the time of the pandemic. Not only does it violate Twitter’s community guidelines, but such brazenly false claims from a minister of the Union government affect accurate reporting, reflect a culture of intimidation to push a view and are insensitive to the numerous families who lost loved ones during the pandemic,” she said in her letter to the microblogging website.

Ms Shrinate said as the chairperson of the Congress’s social media department, it is her duty to ensure that no social media platform is used as a tool to allow such false and malicious reporting.

“The tweet by the minister not only tarnished the reputation of our leaders, but also undermined the democratic process, where the opposition’s views are presented falsely, with a deliberate aim to create confusion, doubt, and animosity amongst the general public, and the falsehood is then amplified through platforms such as Twitter.

“We request you to mark this content as misleading and false and take immediate steps to take down the same. We also request you to take appropriate action against the user who posted the tweet, which clearly violates your own community guidelines,” the Congress leader wrote to Twitter.

Ms Shrinate said false and misleading information can have severe consequences on the public and Congress shall pursue additional legal remedies in this regard.

“We hope you take appropriate action in this regard and look forward to your prompt response,” she added.