58
Shares
Facebook22Twitter14WhatsApp3Telegram1
Linkedin1Pinterest5Tumblr1
NEWYou can now listen to Fox News articles! An Iranian satellite placed into orbit earlier this year reportedly has sent back a photo of the U.S. Fifth Fleet headquarters in Bahrain…

An Iranian satellite placed into orbit earlier this year reportedly has sent back a photo of the U.S. Fifth Fleet headquarters in Bahrain as part of its first batch of high-resolution images.

The Noor 2 satellite, which was launched by the Islamic Revolutionary Guard Corps in March, also captured photos of the southern Iranian provinces of Fars and Bushehr, Press TV is reporting, citing the IRNA news agency.

“Who would have thought that one day an Iranian satellite stationed at an orbit of 311 miles can carry out color imaging from the entire surface of the Earth and send the images to ground stations that have also been built by the Iranian youth,” Issa Zarepour, Iran’s Minister of Information and Communications Technology, reportedly wrote in an Instagram post.

Zarepour added that “this is the first time that a homegrown satellite has sent back high resolution true-color images.” 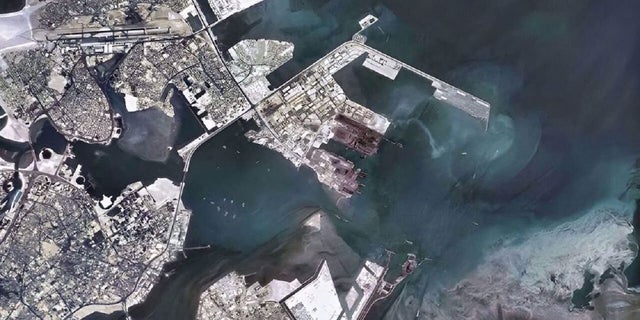 The Iranian military is planning to send a series of the satellites into space in the upcoming years to bolster the Islamic Republic’s defense capabilities, Press TV reports.

The first satellite of its kind was launched in April 2020, the news agency added.

The U.S. Navy says the Fifth Fleet’s area of operations “encompasses about 2.5 million square miles of water area and includes the Arabian Gulf, Gulf of Oman, Red Sea and parts of the Indian Ocean.

“The expanse is comprised of 20 countries and includes three chokepoints, critical to the free flow of global commerce,” the Navy also said.