58
Shares
Facebook22Twitter14WhatsApp3Telegram1
Linkedin1Pinterest5Tumblr1
Karnataka Chief Minister Basavaraj Bommai was in New Delhi on May 10.Bengaluru: Karnataka Chief Minister Basavaraj Bommai's sudden New Delhi visit, his second in 10 days, has sparked off speculation in political circles, especially within the ruling BJP.While it has raised hopes among ministerial aspirants on Cabinet expansion, some believe that this might be to… 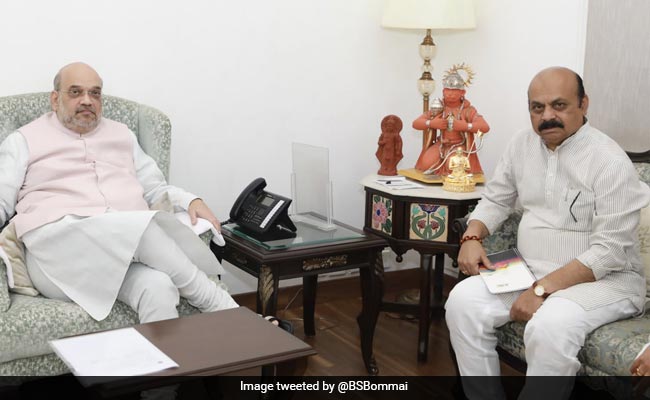 Karnataka Chief Minister Basavaraj Bommai was in New Delhi on May 10.

While it has raised hopes among ministerial aspirants on Cabinet expansion, some believe that this might be to discuss the upcoming polls for Rajya Sabha, Legislative Council and local bodies.

Also, the murmurs regarding possible leadership change have refused to die down following the recent developments in Tripura despite the party time and again clarifying that there is no question of Mr Bommai’s exit.

The Chief Minister left here for the national capital this afternoon and his return-schedule to Bengaluru has been kept “open.” Though there is no mention about Mr Bommai’s meeting with BJP’s central leadership in his official tour programme, some party sources said he is likely to meet them and hold discussions.

As per the tour programme released to the media, he is expected to meet Union Ministers.

Mr Bommai, who was in New Delhi on May 10 and 11, had met Union Home Minister Amit Shah on the second day and held discussions about the much-awaited expansion or rejig of his Cabinet.

After the meeting he had said the BJP central leadership would communicate its decision in this regard after discussions and that “anything may happen at any time.” The Chief Minister is under pressure from aspirants to expand his Cabinet at the earliest, ahead of Assembly polls next year.

Some aspirants said they are of the opinion that at this juncture such an exercise would not be useful, as, they said, the tenure of the new inductees would be very less.

Amid rumours in BJP circles that a top-to-bottom overhaul of the Cabinet cannot be ruled out, ministerial aspirants said they are hopeful of a decision soon regarding Cabinet expansion or reshuffle, and there are talks that even several incumbents could make way for fresh faces.

There are currently five positions vacant in the Cabinet, which has 29 Ministers, including the Chief Minister, against the sanctioned strength of 34.

Some legislators have been advocating a Gujarat-like overhaul of the Karnataka Cabinet soon to make way for new faces.

Mr Shah had visited Bengaluru earlier this month amid buzz over possible changes in the leadership, and pressure to rejig or expand the Cabinet.

According to top BJP sources, Shah too was said to have asked Mr Bommai to focus on development and election preparation, and leave the rest to the party leadership.

However, following Tripura Chief Minister Biplab Kumar Deb being replaced by Manik Saha recently in a sudden development, some party functionaries point to Bommai’s recent statement that “anything may happen at any time.” “Any such decision regarding leadership or Cabinet exercise, only the high command would know, no one here,” said a party functionary.