58
Shares
Facebook22Twitter14WhatsApp3Telegram1
Linkedin1Pinterest5Tumblr1
Robert Vadra is presently on bail in a money laundering case filed by Enforcement DirectorateNew Delhi: Businessman Robert Vadra on Wednesday tendered his unconditional apology for the alleged violation of the terms and conditions of travelling to the UK, Italy and Spain.Special CBI Judge Neelofar Abida Parveen of Rouse Avenue court on Wednesday reserved the… 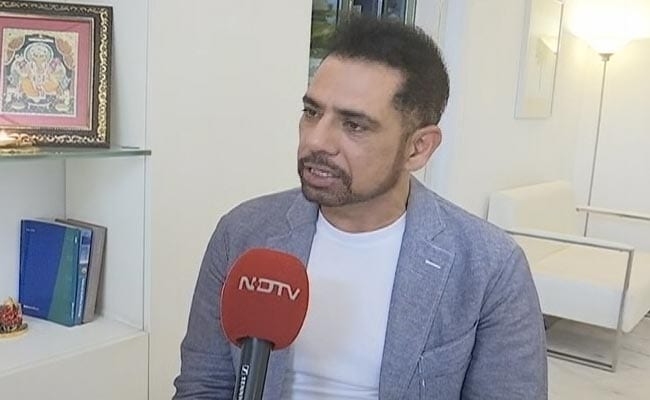 Businessman Robert Vadra on Wednesday tendered his unconditional apology for the alleged violation of the terms and conditions of travelling to the UK, Italy and Spain.

Special CBI Judge Neelofar Abida Parveen of Rouse Avenue court on Wednesday reserved the order on a plea by ED to forfeit a fixed deposit and initiate legal age proceedings against Vadra for violating the terms and conditions imposed by the court to travel abroad.

During the hearing, Vadra offered an unconditional apology before the court even as the ED said that action should be initiated against Vadra. In an affidavit, Vadra said that he made an inadvertent error and instead of “to Dubai”, wrote “via Dubai” in his application seeking permission to travel.

Senior advocate Abhishek Manu Singhavi appearing for Robert Vadra submitted, “I have no doubt made an error.” The judge said, “You should have sought permission.”

This contention was opposed by the counsel of ED. Advocate N K Matta, special public prosecutor (SPP) for ED submitted that Robert Vadra was directed to submit address to the court before leaving India and added that even after coming back to India, he did not submit details of places he visited in UK.

“ED on August 22, 23 and 24 did not object to the modified itinerary (which included a stopover in Dubai for 4 days) that we had submitted, Singhavi argued.

On Monday, the Court had expressed its displeasure with businessman Robert Vadra’s explanation that he stayed in Dubai for a medical emergency in August this year while traveling to the United Kingdom (UK) via UAE and said this is a violation of terms and conditions of the permission granted to him.

The court had also issued a show cause notice asking Vadra, husband of Congress leader Priyanka Gandhi why his fixed deposit receipt (FDR) deposited in terms of order dated August 12 be not forfeited for violating the terms and conditions of the permission granted to the applicant.

The Special Judge Neelofar Abida Parveen on Monday said that she was unable to accept the assertion on sole affirmation of applicant Vadra mentioned in the affidavit that the applicant was forced or compelled under the circumstances on account of medical exigencies to stay at UAE.

The court had further overserved that copy of the travel tickets indicated that Vadra was supposed to stay from August 25 to 29 in Dubai then he was about to travel to London on August 29.

The court had granted permission to Robert Vadra on August 12 to Travel abroad to UK via UAE, Spain and Italy for four weeks. The court had noted that the flight and hotel details mentioned in the said undertaking given by Robert Vadra clearly indicated that he would travel to the UK via UAE as permitted by this Court.

Vadra in his affidavit said that he stayed in UAE before embarking on his further journey because he had deep vein thrombosis (DVT) in his left leg and he had been advised to take proper rest between long-haul flights”.

During the said trip, since there was inflammation and pain in his left leg, he had to stop and seek medical advice in Dubai on August 27 at the LGA medical Facilitation Centre meant for medical emergencies of travelers in Dubai where he was advised further medical treatment in this respect, Vadra’s lawyer argued.

Vadra in his affidavit stated that his stoppage at UAE during the said trip to the UK was not with the intention to violate any condition imposed nor was there any attempt to mislead, rather, was on account of medical exigencies.

Court further noted that he had been allowed to travel abroad earlier for treatment and consultation of DVT by this Court in 2019 and relevant material documents have been previously filed.

The Senior Advocate KTS appeared for Robert Vadra had also filed one medical certificate of the applicant. For filing of explanation and consideration the court further put up the matter for September 21, 2022.

The Robert Vadra is presently on bail in a money laundering case filed by Enforcement Directorate (ED).