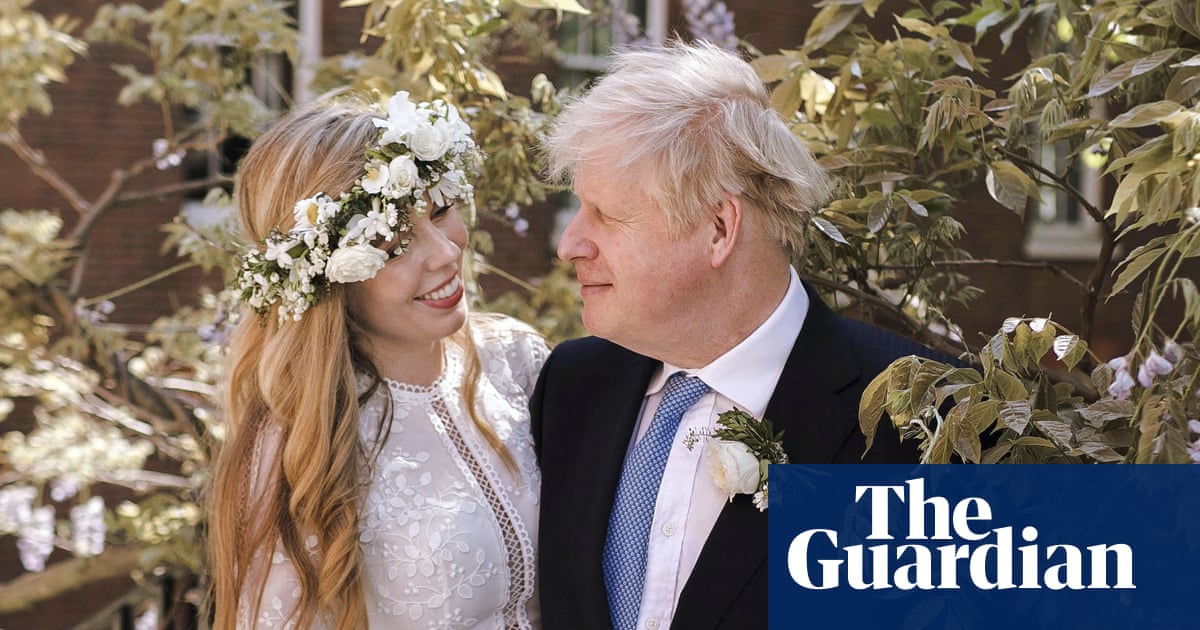 Boris Johnson and Carrie Symonds have opted not to take an immediate honeymoon, as congratulations flowed in following their secret wedding on Saturday.

The couple are instead expected to take time off and celebrate their marriage with a larger group of family and friends next summer, after a surprise ceremony in Westminster Cathedral and a low-key Downing Street garden reception.

In the first picture released of the newlyweds on Sunday, Johnson was seen in a suit and bright blue tie with a white rose on his lapel, with his wife, who wore a white embroidered dress and headband of flowers. It has been confirmed she will take his last name and be known as Carrie Johnson.

They got engaged on the island of Mustique in late 2019 and had a son, Wilfred, in April 2020 – just weeks after the prime minister left hospital after being treated for Covid in intensive care.

Plans to tie the knot were put on hold during the pandemic, with the wedding industry one of the hardest hit by curbs on the number of people allowed to socialise and restrictions other aspects such as singing and dancing.

It was reported earlier this week in the Sun that the couple had sent save-the-date invites to “celebrate their wedding” on Saturday 30 July 2022, fuelling speculation they would wait until next year.

But reports surfaced on Saturday evening that they had been married earlier that day at the Roman Catholic cathedral just over a mile from their home. Shortly after 1.30pm, the cathedral was apparently cleared of visitors, with staff saying it was going into lockdown, followed by the bride arriving half an hour later in a limousine, sweeping into the piazza outside the main west door.

Johnson’s father, Stanley, had earlier been spotted in smart attire on the steps of No 10, while a band was also seen exiting Downing Street that evening.

The ceremony was reportedly carried out by Father Daniel Humphreys, who had given the couple pre-marriage instructions and baptised Wilfred last year, and makes Johnson the first prime minister to marry in office since Lord Liverpool wedded Mary Chester in 1822.

The timing of the ceremony has prompted questions about whether the final set of Covid restrictions – scheduled to be lifted in England on 21 June – could be delayed amid concerns from scientists about cases rising to levels last seen at the end of March and the spread of the variant discovered in India.

The vaccines minister, Nadhim Zahawi, insisted the wedding did not take place on Saturday because of the possibility that a cap on guest numbers due to be lifted next month will not happen as planned.

Asked if that was the case, he told Sky News’ Trevor Phillips on Sunday: “No – but I want to congratulate the prime minister and Carrie Symonds on tying the knot.” He added it was a “wonderful thing for both of them” and stressed no decisions had been taken about further unlocking, urging people to wait for the official announcement on 14 June.

The minister for children and families, Vicky Ford, sent her congratulations and “big love to Wilf”, adding: “So many weddings have been delayed and disrupted by Covid. Life is always better with love.”

The happy news for the couple came at the end of a difficult week for the prime minister, when his former chief adviser, Dominic Cummings, claimed he was “distracted” from dealing with the pandemic by “finalising his divorce, his girlfriend wanted to announce being pregnant and an engagement, and his finances”.

The Labour MP and former frontbencher Jon Trickett said the wedding was “a good way to bury this week’s bad news” about Cummings’ damning testimony, the spread of the India coronavirus variant and the row about funding of the Downing Street flat.

His fellow Labour MP, Tonia Antoniazzi, suggested the “emergency marriage plan” was an attempt to “deflect from negative press” from Cummings. She added: “They know he won’t be able to plan one in Chequers cos he won’t be PM next year.”

BJ Thomas, singer of Raindrops Keep Fallin’ On My Head, dies at 78