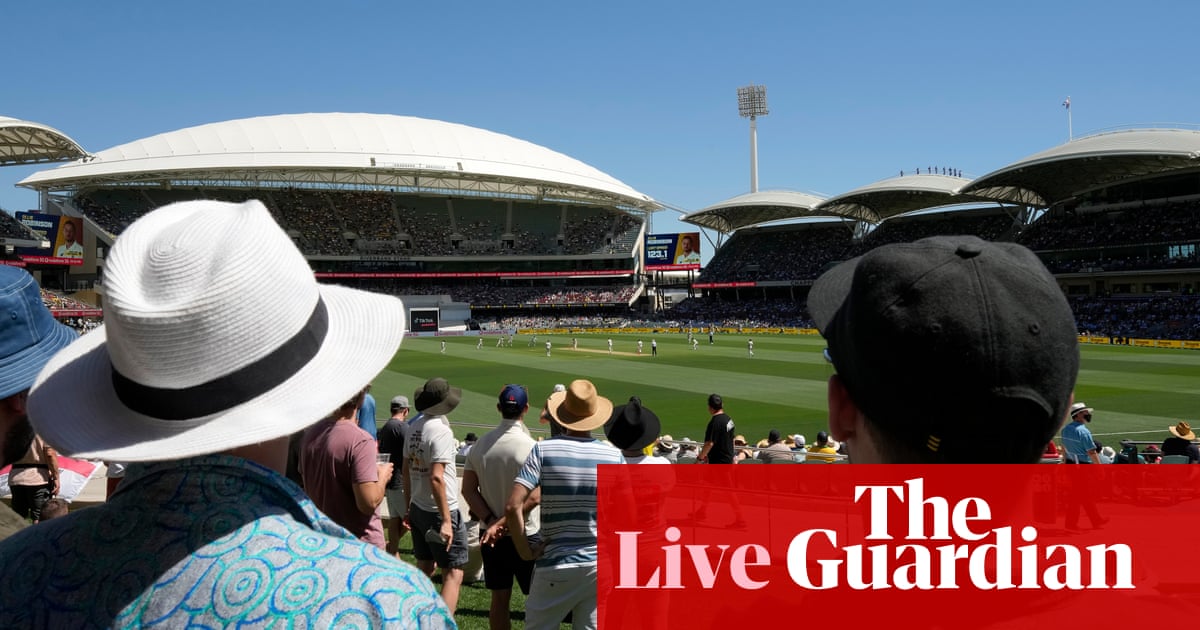 A statement from the England camp. “Joe Root will not be on the field at the start of play today after being hit in the abdomen during throw downs in the warm-up before play. He is currently being assessed by the England medical team.” We can only wish him well and hope it’s not serious.

Abdomen, hmmm… sounds like a euphemism. Will Macpherson, once of the OBO, now on the Evening Standard, spells it out on Twitter: “I think he’s taken one to the knackers.”

Need to catch up on yesterday? Geoff Lemon had this to say about the Green-Root moment:

This has just come in from England’s camp:

“England captain Joe Root will not be on the field at the start of play today after being hit in the abdomen during throw downs in the warm-up before play. He is currently being assessed by the England medical team.”

We’ll keep you updated as we find out more.

Cricket Australia is in the midst of another Covid-19 scare after a broadcast crew member at Adelaide Oval for the second Ashes Test tested positive to the virus.

Just days after Australian captain Pat Cummins was ruled out of the Test after being deemed a close contact, officials had another issue to deal with on Sunday.

It’s believed the person who tested positive is a member of a radio crew, with both the BBC and ABC – who share some staff – considering whether they can cover the match from the ground on day four.

“We have been advised that a member of a broadcast crew has returned a positive Covid result as part of their scheduled testing,” Adelaide Oval said in a tweet. “SA Health are aware and we have begun to trace and notify this person’s close contacts.”

Media do talk with players when interviewing, however they have been asked to social distance from them this week.

Media have also been asked to wear masks during the Test, while the large section who arrived from NSW and Victoria were tested on touching down and again on the sixth day of their stay.

Officials were confident on Sunday that the positive case would not have any impact on the players or match.

Morning everyone, or afternoon everyone. All over England, the theatres are closing their doors – but don’t worry, there’s one show that must go on: the long-running farce known as England’s Test team. It has had a bumper year, delighting audiences in New Zealand, India and Australia, as well as in England, where people secretly love having something to moan about, and the football team are threatening to let the nation down by becoming consistently adequate.

The gods of sport, always keen on an upset, decided to make this match a handicap. They gave Australia two big disadvantages – an injury to rule out the world’s No.4 bowler, and a Covid ping to take out the world No.1. They even handed the captaincy back to someone who’d lost it in disgrace (there’s hope for Tim Paine yet). They did all they could, short of telling Marnus Labuschagne he had to shut up. And still the Aussies have walked all over England.

They piled up 473, decided that was enough, let loose their makeshift attack, and allowed England to make only half as many. The role of Pat Cummins was filled, effortlessly, by Mitchell Starc; the role of Josh Hazlewood by Cameron Green, of all people. The role of Nathan Lyon, which had been grabbed by an impostor for a few months, reverted to its rightful owner on the final day of the first Test. In this one, he’s taken great pleasure in showing England how wrong they were to spurn their specialist spinners.

Only two things can stop Australia going 2-0 up. One is the weather – there was a fair bit of rain forecast today, but only in the morning, so it seems unlikely to make much difference unless it’s been held up by the Covid protocols.

The other is a doughty rearguard action of the kind that was once England’s stock in trade. The last time we saw one of those was Cardiff in 2009, the time before that Johannesburg in 1995. It would be manna from heaven for England fans now, but it doesn’t seem very likely. And if Australia’s batters were over-cautious last night, they could afford to be.

Do join me at 2.30pm Adelaide time (4am in the UK) to see if this familiar tale can produce any kind of twist.