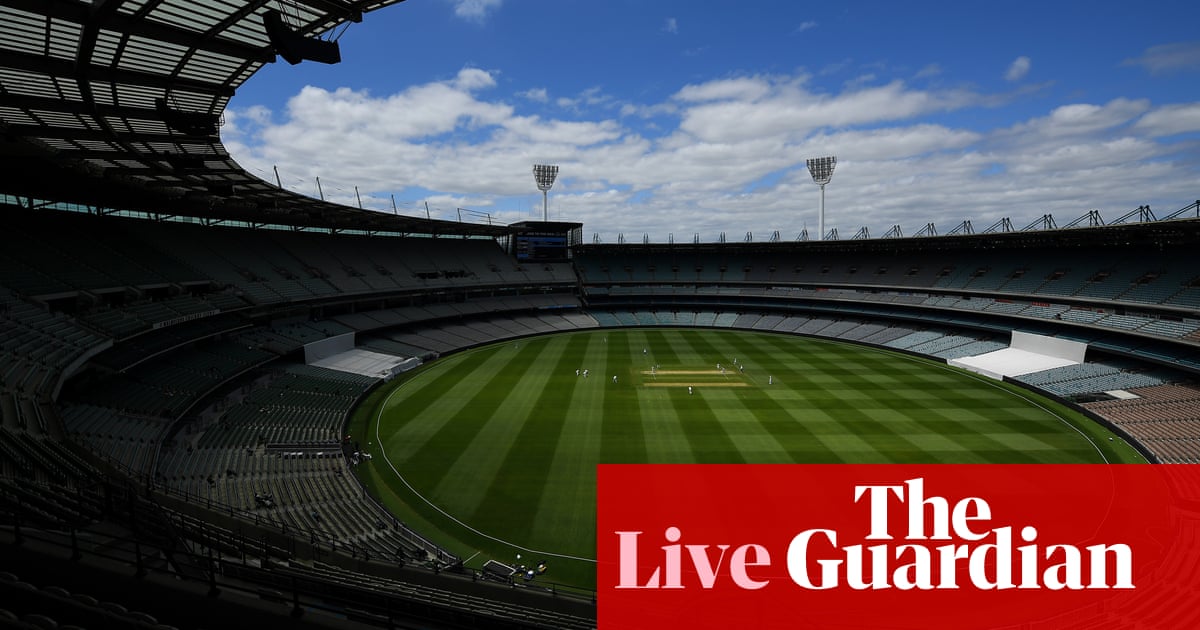 Here is the cut strip that won’t be used for a while yet.

Confirmation the toss has been delayed.

Good luck to Dave. By midway through the afternoon session, being in the outer at the G is not always the most relaxing place for an Englishman. (I speak from personal experience.)

As for the toss. Yes, you’d reckon it’s a bowl-first, but a wet outfield may force some second-guessing. I’m not sure it matters much for Cummins, but Root really has to attack, and with such a weak batting order around him, making early inroads with the new ball may be his only route to victory.

There’s been plenty of talk about the pitch here at the MCG, but – Melbourne being Melbourne – the start of play is under threat from drizzle. Just ten minutes out from the toss, the pitch is under cover as some rain drifts across the arena. It’s been midsummer beautiful in Victoria for a week or so, but conditions today are cool, there’s a blanket of cloud swaddling the CBD, and some of it is heavy enough to reach ground level.

Some sad news to begin with following the announcement of the death of former England allrounder, captain, coach, selector, and self-appointed supremo, Ray Illingworth.

Hello everybody and welcome to live over-by-over coverage of the Boxing Day Ashes Test. We’re underway at the Melbourne Cricket Ground at 10.30am local time (11.30pm UK).

I hope you’re all well-fed, well-rested, and ready for one of the landmark days on the sporting calendar. As Cliff Richard sang, it’s a time for giving (your wicket away reverse-sweeping to point during a blockathon) a time for getting (dropped), a time for forgiving (Jos Buttler) and a time for forgetting (Joe Root winning the toss in Brisbane). Now let’s rejoice in the good that we see.

That good includes the selection of Scott Boland, only the second Indigenous Australian man to be awarded a baggy green, as well as the prospect of 70,000 or so fans inside the MCG, providing one of sport’s most incredible audiences. There’s England’s final chance to right some wrongs in the battle to regain the Ashes. Pat Cummins is back. So is Jonny Bairstow. And Zak Crawley. So put the wrapping paper in the recycling, lay out your selection box on the table, and settle in for one of the best days (or nights) of sport of the year.