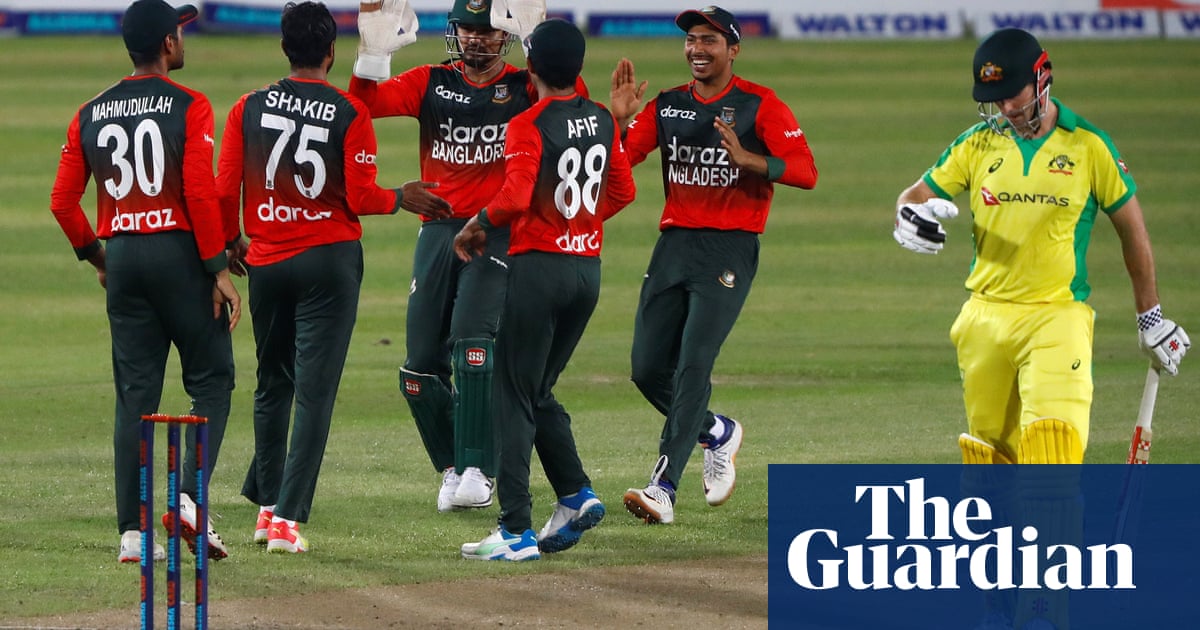 Australia again struggled against spin as they suffered their first T20 cricket loss to Bangladesh, crashing to a 23-run loss after chasing a modest target in the opening game of a five-match series in Dhaka.

It is the first bilateral T20 series between the two nations, with Australia having won each of their four World Cup encounters against Bangladesh.

As it was in last month’s series against the West Indies, Australia’s struggles against spin were evident. Bangladesh bowled 13 overs of spin and their slow bowlers took the first six wickets, with their two left arm quicks mopping up the tail.

Coming off four successive T20I series losses across which they won just five out of 16 games, Australia looked well placed when they held Bangladesh to 131-7, after captain Matthew Wade sent the home team in.

However, Australia made a horrid start to their innings, crashing to 11-3 after just 2.1 overs and lost 5-24 to be dismissed for 108 off the final ball.

Alex Carey, who was moved up the order to open in the absence of the injured Aaron Finch, was bowled by offspinner Mahedi Hasan off the first ball of the innings. Man of the match and left arm spinner Nasum Ahmed (4-19 off 4) had Josh Philippe stumped in the second over.

Moises Henriques, who like Philippe struggled for runs in the T20 and ODI series in the West Indies, was bowled off his second ball.

Mitchell Marsh (45 off 45 balls) maintained his excellent batting from last month’s T20 series in the West Indies, but no other Australian batsman scored over 14. When Marsh was the sixth man out at 84 in the 16th over it effectively ended any realistic hope of an Australian victory.

Until the 17th over, Marsh was the only Australian to hit a four and the visitors managed just six boundaries and two sixes. Marsh said there was not a lot of turn but the pitch played low and slow.

“Obviously we all want to get better playing at spin and in these conditions there’s no hiding the fact that its tough,” Marsh said. “Ultimately chasing 130 you’re only ever one partnership away and we just couldn’t get that tonight so that’s where the game was lost.”

Marsh said Australia were without good players of spin in David Warner, Steve Smith, Glenn Maxwell and Marcus Stoinis, but was adamant the squad still had batsmen capable of doing well against slow bowling.

“I certainly think that this group here we’re not hiding behind the fact that we are going face a lot of spin here, it’s going to be a challenge and we’ve got to be up and about for it,” Marsh said.

“But I think we’ve still got some really good players of spin here and hopefully we see that in the next few games.”

Veteran allrounder Shakib Al Hasan top scored with 36 off 33 balls. Opener Mohammad Naim (30 off 29 balls) flicked two sixes over midwicket off Starc. The second game will be played on Wednesday.

700-plus healthcare workers and patients killed in attacks on facilities: WHO

UN chief underlines commitment to justice for Yazidis in Iraq