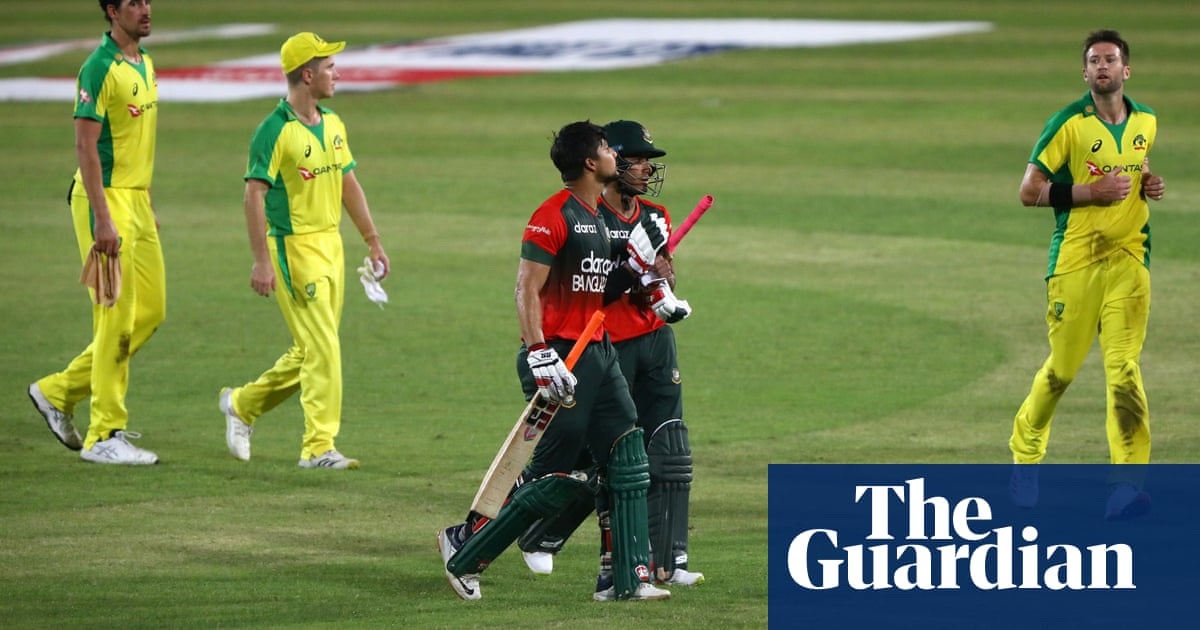 Australia are in grave danger of losing a fifth successive T20 International series after going 2-0 down with a five-wicket defeat against a “smarter” Bangladesh following another poor batting performance in Dhaka.

Chasing Australia’s score of 121-7, Bangladesh lost wickets at regular intervals and slumped to 67-5 in the 12th over in Wednesday’s second international. But an unbroken sixth-wicket stand of 56 between Afif Hossain (37 off 31 balls) and Nurul Hasan (22 off 21) secured the hosts another victory in the five-match series with eight balls to spare.

Australia have lost seven of their last eight and 13 of their last 18 T20I games and once again it was their brittle batting which was the biggest problem. Mitchell Marsh (45 off 42) was Australia’s top scorer for the second straight day, equalling his total from the first match in which Australia were dismissed for 108 and lost by 23 runs.

Since being promoted to No 3 last month, Marsh has been dismissed for under 30 once in seven T20I innings against the West Indies and Bangladesh. But again he lacked support with only Moises Henriques (30 off 25) hanging around for long in a third-wicket stand of 57, which took the score to 88-2 .

That was as good as it got for Australia, who lost 5-18 with some poor shots against an attack which mixed their pace up well. After the spinners did most of the damage in game one, it was Bangladesh’s two left arm quicks Mustafizur Rahman (3-23) and Shoriful Islam (2-27) who enjoyed most success, though the former’s use of cutters and slower balls was very effective.

“We have to find a way in a very short turnaround to combat that and try and get as many runs as possible,” Henriques said. “It’s quite clear it’s not going to be a 160 or 180, 200 run wicket, but we still need to find a way to just get a few more out whether its 140, 150, whatever it might be we, just need to hustle a little bit.”

Australia went 24 balls without a boundary near the end of their innings. “I thought they were actually a bit smarter than us to be honest,” Henriques said. “It probably helps that maybe they’ve played possibly in monsoon season here on this wicket.

“They’ve got the advantage of having played here so many times, but a lot of their spin bowlers were bowling less than 80kph, that’s not to say that’s going be successful all the time.

“Its just in these conditions against our batters who are probably used to facing faster spinners, it’s a big change for us, so we’ve got to come up with a way to combat that as intelligently as possible as a batting team.”

Australia needed early wickets and pacemen Mitchell Starc and Josh Hazlewood each bowled one of the openers in their second overs to leave Bangladesh 21-2 in the fourth.

Mahedi Hasan (23 off 24 and Shakib Al Hasan (26 off 17) added 37 for the third wicket, before Australia’s bowlers again hit the stumps in successive overs. Al Hasan was bowled by AJ Tye and captain Mahmudullah had his stumps disturbed by Ashton Agar before scoring. Mahedi Hasan was stumped off legspinner Adam Zampa, but after losing 3-9 Bangladesh steadied and shut Australia out with a match-clinching partnership.

The series continues on Friday.