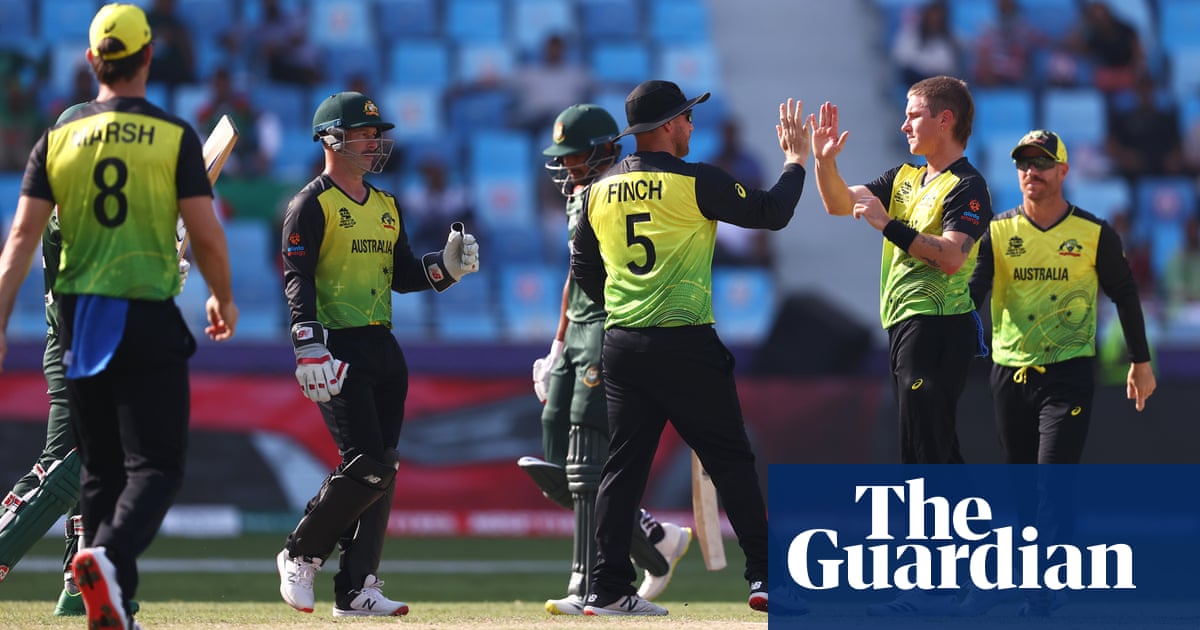 The nature of this group and this competition meant that Australia needed not just to beat Bangladesh but to thrash them if they were to overtake South Africa and take control of the second semi-final spot with one game to go. What followed was one of the most one-sided contests in the history of the T20 World Cup, and a victory by eight wickets secured with 82 balls to spare.

Adam Zampa was named player of the match after taking five wickets for just 19, clearing up all but one of the last six Bangladeshi batters to fall, but these were opponents who put up the lamest of fights. Liton Das was bowled by Mitchell Starc with the third ball of the innings to set Bangladesh on their way to defeat, and in all they lost a wicket in five of the first seven overs, at which point they were 33 for five – and this on what their captain, Mahmudullah, later declared “the best wicket we played on, for batting especially”.

One of the great challenges of this World Cup has been working out how Bangladesh came into it ranked sixth in the world. We can only hope that someone somewhere is hurriedly redesigning the algorithm that decided they were a superior side to Australia as the tournament began, because since they came into the Super 12s – having notably lost to Scotland in the opening group stage – they have been largely abject. Only against West Indies have they even been competitive, and their campaign ended with them being utterly outclassed.

It is true that Bangladesh beat Australia 3-2 in a five-match series this year, but all of those games were played in Dhaka. This was the 19th game Bangladesh have played away from home in the last three years, and they have lost 14 of them. In the same time they have played 19 matches at home, and won 13 of them. They simply suffer from the most debilitating travel sickness.

Australia’s success with the ball led to hurried calculations at the innings break around net run rate. It turned out that they would have to win the game in just over eight overs if they were to move into second place, a line they crossed with 11 balls to spare. Aaron Finch’s side were not the only ones who needed a calculator: a few minutes later, when Finch lifted Mustafizur square for one of his four sixes to take his side to 35-0, the stadium DJs played a clip from Bon Jovi’s Livin’ on a Prayer, infuriating the mathematicians in the audience who knew Australia were still two runs away from being halfway there.

This was emphatically not a game for batting purists, with Bangladesh too careless and Australia too carefree. Such was the chasers’ hurry they swung their bat at almost everything, and eventually both Finch and David Warner were bowled heaving across the line – easily the most impressive thing about Bangladesh was the enthusiasm with which they celebrated these irrelevant breakthroughs – but they were only ever going to be delayed rather than denied, and even then not by much.