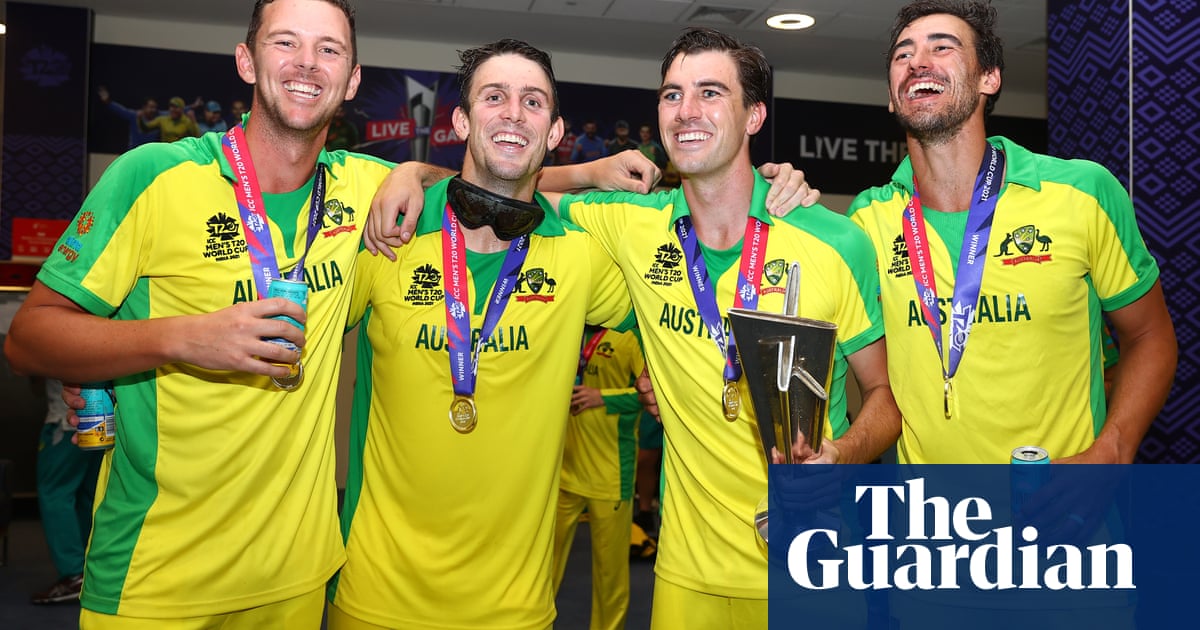 Australia’s relationship with Twenty20 international cricket has always been strained. When Ricky Ponting captained the first ever match in 2005, with players in fancy dress wearing contrived nicknames on their shirts, even smoking an unbeaten 98 couldn’t stop him looking like an unimpressed cat unable to bring up a hairball.

Influential people shared his disdain, but even after taking the format seriously, and developing one of the better domestic leagues, Australian teams in T20 World Cups fell flat. It was easy to dismiss the importance of the condensed form, but for a dominant Test power that also collected 50-over titles like stamps, the shortfall was a quiet irritation with no immediately apparent remedy.

So when Australia rolled up to the 2021 tournament with what looked suspiciously like a Test team wearing a false moustache, it invited scepticism about their chances. It looked like another muddled approach from people who hadn’t come to grips with the format. Yet on the final night of the tournament, here they were, winning it with a Glenn Maxwell switch-hit and plenty of time to spare. No matter what tactical or data arguments can be made otherwise, this campaign has been proved right and those of us who questioned it are wrong.

Primarily, it relied on a Test-hardened pace attack. Josh Hazlewood, Pat Cummins and Mitchell Starc played every match through the tournament, and in the final, just about did the job again. They suffocated New Zealand during the six overs of the powerplay, taking one wicket while conceding 32 runs. After parsimonious legspinner Adam Zampa bowled until halfway through the innings, the score was 57 for one. It was all but impossible for New Zealand to post a sufficient total from there.

Hazlewood was once thought too predictable for the format, but has been a revelation recently by consistently hitting a hard length with steep bounce that is difficult to attack. He returned an astonishing three for 16, Cummins the exemplary economy of none for 27. The plan nearly came undone during two overs from Mitchell Starc, one costing 19 runs, the other 22. Hazlewood had a hand in that, having dropped a catch off the bat of Kane Williamson. To that point, Williamson had three runs from Starc. Afterwards, Williamson took him for 36. In three overs Starc bled 51 runs, and New Zealand were back in with a chance.

All of this was amid Williamson producing one of the great innings in the format. A captain, in a final, unsupported, starting way behind a decent run-rate and having to catch up. After Daryl Mitchell was out early, Martin Guptill’s job was to keep his foot down while Williamson got the measure of the match. Instead, Guptill played with a timidity that belied his experience. However well they bowled, he made no attempt to take on Australia’s quicks. He lasted into the 12th over to finish with 28 from 35 balls, caught from his first big hit. Glenn Phillips followed with a stuttering 18 from 17. Considering that the finisher Jimmy Neesham saw only seven deliveries at the end, these strike-rate offences were criminal.

Williamson is not supposed to be the fastest scorer in his team, but the one that bats through an innings. To compensate, he had to be both. The staid and steady skipper produced a one-handed sweep off Maxwell for six in a style reminiscent of India’s Rishabh Pant. He spotted a Starc slower ball and middled that into the crowd. He picked deliveries, picked gaps, and had time to pick his nose before playing a delicate lap shot over short fine leg. He deserved to be on a winning team.

But winning teams can’t play half an innings, and even a fine recovery to 172 for four left too slender a target. That was where Australia differed. After starting the tournament prodding to a win over South Africa that had no right to be close, this side retired caution. Despite a brilliant opening over from Trent Boult, David Warner went after the bowling from ball five. Aaron Finch fell early, but that introduced Mitchell Marsh to demolish his first ball for six, helping himself to Adam Milne’s pace to whip off the pads, followed by a couple of fours.

Marsh never slowed down, and Warner upped the ante to loot 17 from an over of Ish Sodhi spin. By the time he was out at a similar point of the innings to Guptill had been, Warner had 53 from 38 balls and Australia were into triple figures. To forestall any chance of a concerning rise in run-rate, Glenn Maxwell climbed into every short ball he received, whacking three fours and a six before his final flourish. Meanwhile, Marsh ploughed past his own half-century, on to 77 not out and player of the match.

So here they are. An outfit that didn’t look built for T20 cricket, in a tournament where two slicker outfits in Pakistan and England lost their semi-finals. A team that won, meaning the why and the how and the strengths no longer matter. Most of all, the first Australian winners of a T20 World Cup title, the one that has been so elusive. For New Zealand, having fumbled three white-ball World Cup finals in the past six years, the details of what kind it was wouldn’t have been important. For Australia, the detail mattered more than anything.