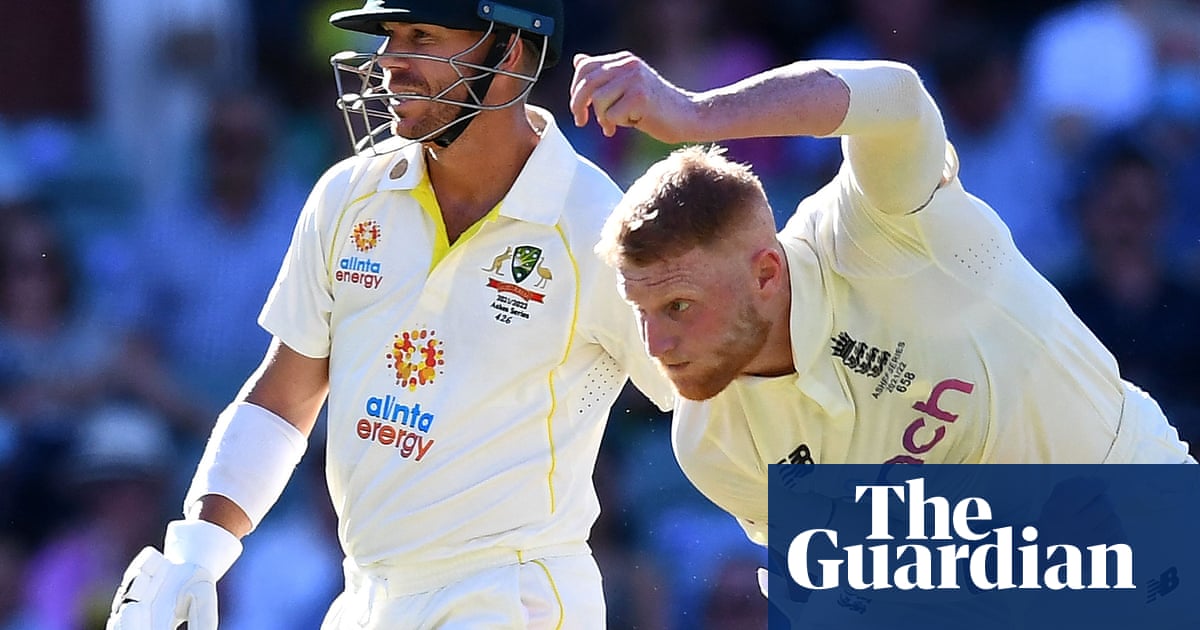 What’s got red hair and six legs? Ben Stokes bowling at Marnus Labuschagne. OK, as a Christmas cracker joke it could do with some work. As a bowling strategy, however, it proved a lot more entertaining – and for England, provided the highlight of a day that could otherwise be described as frustrating, disappointing, and a missed opportunity.

Australia were 25 for one when Stokes came on for his first spell, with half an hour left of the opening session. He made his intentions for Labuschagne clear the moment the No 3 appeared in his sights: one at the head, one at the chest. Stokes’s next over was faster but messier, with two no-balls and a bouncer tall enough to be called a wide. His third over was the one that clicked.

There were a number of clues to what Stokes was intending: he had posted a midwicket, a mid-on, two men square of the wicket and a long leg. But the biggest clue was that every ball was aimed at Labuschagne’s body or bonce. The first was a climber that he forced down off the splice. The second rose even faster, and he sliced it past Root at slip. He ducked the next and was caught on the back foot by the fourth, searching blindly for a ball that landed safely behind his back. The fifth cracked into his ribs at 86mph.

There was more of the same served up after the interval, only by now the field placements were even more exaggerated. At one point, a camera looking across from the stumps deftly framed a short leg, square leg, and backward square leg, all telescoping away from the lens like a mise en abyme. Unfortunately, when the gloved edge came it went to none of these carefully positioned leg theorists, but flew behind to Jos Buttler, who dropped a catch far easier than the flying-squirrel affair with which he’d dismissed Marcus Harris earlier in the day. If he had taken it, Australia would have been 62 for two.

Joe Root was so committed to the bit that at one point he stuffed a box down his trousers and set himself up at silly mid-off. Perhaps this plan had been formulating in the captain’s mind since his talismanic all-rounder biffed him on the helmet in the practice nets two days ago. Maybe Stokes’s turn of pace that day even contributed to the decision to leave Mark Wood on ice. Too difficult to tell: trying to follow the selection logic of the Root-Silverwood axis can be a painful pursuit in that it suggests a level of tortured overthinking reminiscent of Wallace Shawn’s Vizzini choosing between potentially poisoned wine goblets in The Princess Bride. Was leaving Stuart Broad out at the Gabba the double bluff, or the triple bluff? The battle of wits has begun: it ends when we find out who is right and who is dead.

Anyway, back to Stokes, the man who’s bringing Bodyline back. He put six men on the legside to David Warner and came in round the wicket – until Warner had enough, and decided to put the ball where the fielders weren’t. Out went the Test textbook, in came the one-day manual: the batter leaned back and carved an outrageous inside-out drive over cover for four. Two balls later he was pulling to the boundary for his 50.

Still, even when he wasn’t bowling, it felt like Stokes was everywhere, just like the good old days. He nearly caught Labuschagne twice himself. First the ball roared past him at leg slip off his captain’s bowling – as if Root was trying to prove that Stokes wasn’t the only one who could make the ball rear – and later, in the gloaming, a forced drive off Anderson dropped agonisingly short of him at mid-off.

In fact, for a while after the supper interval the ball seemed to be chasing him around the field, although the opposite was, of course, the case. This was classic Stokes, all effort all the time, no thought spared or allowance given for the knee injury he carried over from Brisbane. Whenever he stopped the ball on the boundary, he’d usually chased it halfway across the field first.

He came back on for his final spell just as the sun was dipping behind the trees. Warner and Labuschagne had decided to take him on, and his first seven deliveries yielded three boundaries and 13 runs. Warner had just split the two fielders on the boundary square of the wicket, and Root had placed another man in the gap. There was only one fielder, Broad, standing forward of square on the offside – and yet, just five runs off his century, Warner slapped Stokes’s next ball into his hands.

England had been waiting all day for the magic hour, the twilight realm when the skies turn as pink as the ball and the shadows multiply under the floodlights. They had toiled all day in the sun, in the strong belief that the dusk would be theirs. In the end, it was only Stokes who delivered on its promise.