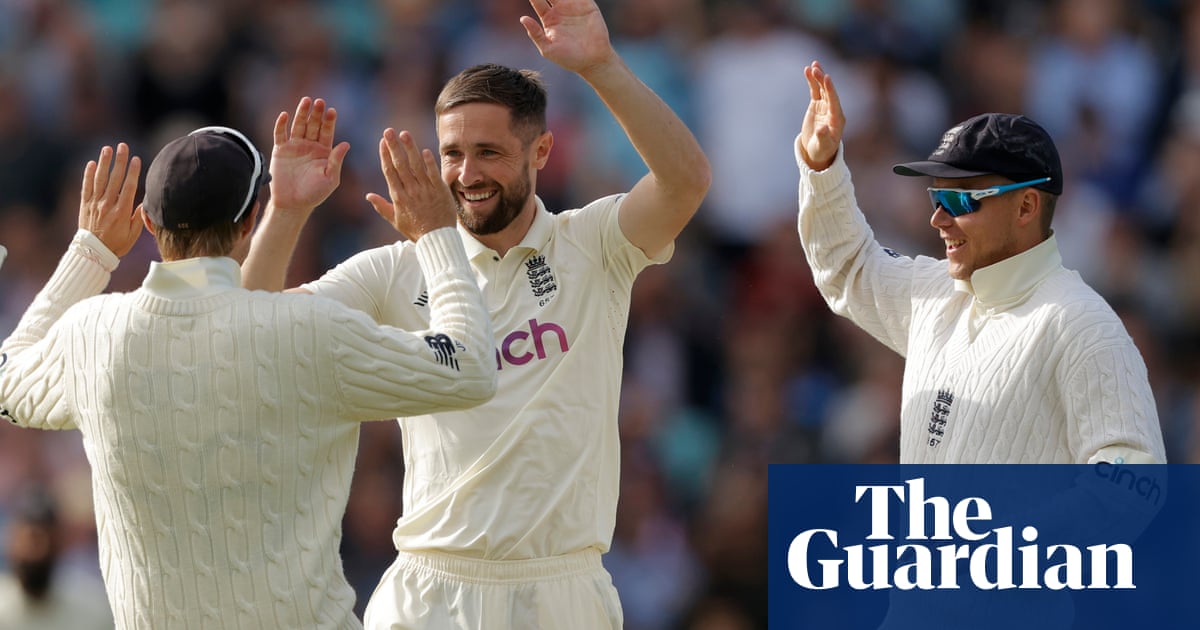 ‘From the Vauxhall End, Chris Woakes.” A ripple of applause. A purposeful, economical run to the crease. An immaculate 85mph delivery on a perfect length, challenging the off-stump, forcing the defensive stroke. Perhaps this is all the fanfare Woakes has ever demanded. Certainly, as he began his 17th crack at Test cricket, he knows not to expect anything more.

It was Woakes’s first delivery in a Test match for more than a year, and yet you wouldn’t have known from watching it whether he had been away for a year or a week. This, in a way, has been his greatest gift and his greatest curse: that sense of reliable timelessness, of comfortable familiarity, of known known. The same qualities that have made Woakes so easy to pick over the years have also made him easy to drop.

1-3-1-1-9-2-1-4-1-1-2-4-1-1-1-5-1. This has been Woakes’s Test career since making his debut on this ground in 2013: Thirty-nine Tests in 17 separate stints, despite a perfectly decent record and few major injuries. Woakes has long since accustomed himself to the caprice of selection and conditions, and yet even by those standards the last year has been particularly absurd.

If you’re a recreational player of any standard, there’s a decent chance that you may have played more cricket than Woakes in the last year. As he stood at the end of his mark on Thursdaymorning, Woakes had bowled a total of 79 competitive overs since his last Test against Pakistan at the end of August 2020, all of them with a white ball. For most of this time he has been fit and raring to go and yet – through a combination of misfortune, mismanagement and downright cock-up – largely redundant.

It all began with the fateful shared car journey from Birmingham to Heathrow on the way to England’s tour of Sri Lanka in January, after which Moeen Ali tested positive for Covid-19 and his travelling companion Woakes was quarantined as a close contact. Then he went to India to carry the drinks for three Tests before being flown home for a rest. Then he was left out of the New Zealand series as a result of his involvement in the Indian Premier League, even though he only played three games for Delhi. Then he got injured.

And so now, here he is: a year older and perhaps a year wiser, a player who has learned that good things do not come in a hurry. Woakes has been the future of English seam bowling for so long that it’s easy to forget that he’s now 32 and shrouded in five-o’clock shadow. He’s been an England player for more than a decade, and yet he’s probably watched more cricket than he’s played, carried enough drinks and bowled enough net deliveries and ordered enough room service to last several lifetimes.

He’s seen Ollie Robinson and Craig Overton leap-frog him in the queue, learned that – no matter what they tell you in the self-help manuals – hard work and patience and best intentions don’t always go rewarded. And yet despite everything he runs in hard, bides his time, probes and hopes, refuses to take the path of least resistance. Because, at the end of the day, what else is there?

And perhaps the miracle of Woakes as a cricketer – a trait often held against him – is that natural rhythm, that unerring consistency in a game that has done its level best to mess him about. That first over was bang on target, the ball coming nicely out of the fingers and zipping off the pitch, Rohit Sharma’s edge beautifully located. By the start of his fourth over, he still hadn’t conceded a run.

Shardul Thakur had some fun with him later in the innings, panning him for 35 in 19 balls as India tried to hit their way out of trouble. Yet even here Woakes finally got his man, pinning Thakur LBW for his fourth wicket. In between he had two catches dropped in the slips and saw an LBW decision against Ajinkya Rahane overturned by the third umpire. A fine day’s work, and yet one that with a little more fortune could have been spectacular.

And in a way, this could be Woakes’s career in microcosm: a fine record with just a hint of what might have been. In retrospect, it was his great misfortune to emerge in the shadow of England’s two greatest modern fast bowlers, in an age of diverging formats and ridiculous schedules, in a time of rotation and bubbles and Covid.

Still, you suspect he doesn’t see it that way. Because whatever indignities and inconveniences have been visited him in the past, whatever uncertainties lie in the future, ultimately the next ball is the only thing that matters.