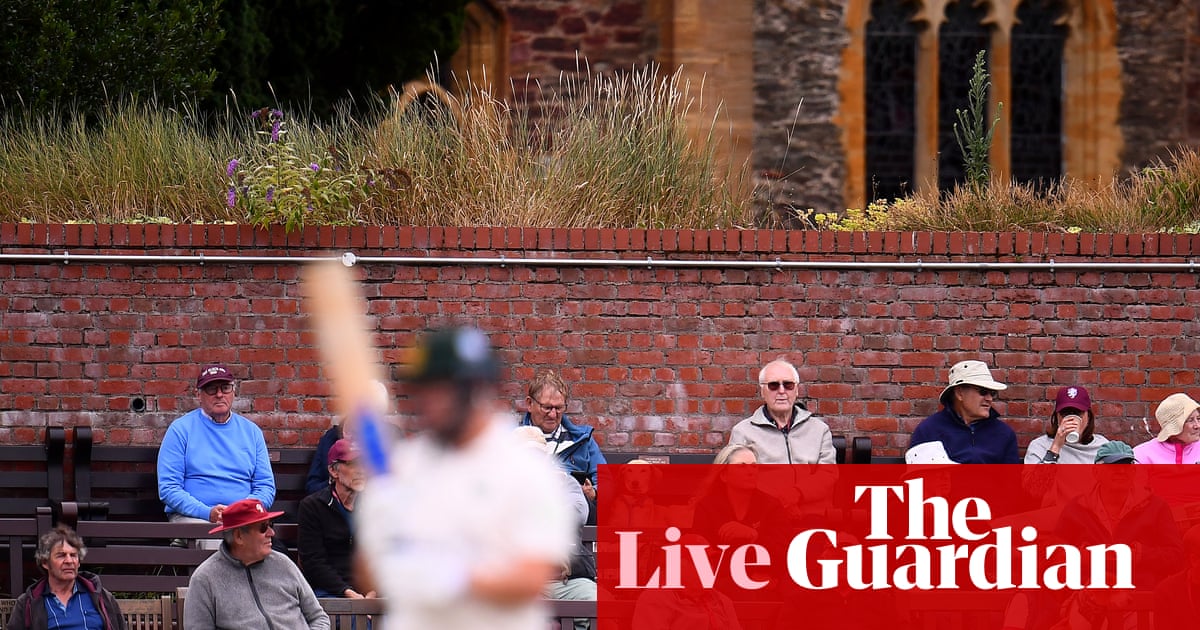 There was much to get used to as the County Championship returned. Counties moved into three divisions, only one of which vies for the title.

Batting after months of white-ball cricket was easier for those with time to adjust in the middle order. Dom Sibley, Alastair Cook, Sam Robson, Mark Stoneman, Adam Lyth: former England Test openers of varying recency were all out early.

In Division One, Warwickshire recovered from Sibley’s duck to dominate Lancashire. Wicketkeeper Chris Benjamin on his county debut made 127, and piled on 237 with Sam Hain. Warks reached stumps on 259 for three, with Hain to resume on 113. Lancashire’s Saqib Mahmood nearly made a Test debut last week, but went wicketless here until the second new ball had Benjamin baseballing across the line.

Nottinghamshire got a late boost against Somerset at Taunton to reach 282 for six, thanks to Liam Patterson-White down the order swinging nine boundaries in making 46 from 37 balls. He’ll resume with Tom Moores.

Yorkshire had a day of changing fortunes after Hampshire sent them in on a green Ageas Bowl surface. The visitors started slowly to reach 84 for two, but Hampshire chipped away, including the first three wickets to Kyle Abbott. It needed 45 not out from Dom Bess for Yorkshire to reach 197 for six at stumps.

Another player looking for an England recall, Zak Crawley, did well with 50 opening for Kent. It was the major score of the innings through a collapse to 164 for nine, until Jack Leaning reached 75 not out during a 68-run stand with No 11 James Logan that lifted the visitors to 232 all out. That rattled Leicestershire despite Callum Parkinson’s four wickets, and they slumped to 66 for five by stumps.

Surrey’s trip to Durham was cancelled after Surrey players were ruled close contacts in a Covid trace.

In Cardiff, the Netherlands international Shane Snater took six for 39 for Essex on the way to bowling out Glamorgan for 134, with England candidate Dan Lawrence on 29 not out in the reply of 92 for two. Northamptonshire made 232 for five against Gloucestershire at Bristol, led by captain and wicketkeeper Adam Rossington’s 66 not out.

Middlesex collapsed to 52 for four against Derbyshire, but Robbie White picked a good time to make his maiden century in first-class cricket. His 101 not out by stumps rescued the situation at Lord’s to 217 for five. With Sussex resuming on 254 for nine against Worcestershire, No 9 Jack Carson will also resume on a career best, having hit a counterattacking 75.

Hello from a fair to middling morning in Manchester, where front garden flowers are overblown, and the occasional cardboard box of windfalls sits outside the front gate. Welcome to the last day of summer.

The second half of this Championship – the playoffs – started yesterday. One of the teams in Division One will walk away with the Championship, the top two will battle for the Bob Willis Trophy at the end of September, for everyone else it is pride, places and some financial reward.

There was steady progress yesterday all round, except for Grace Road, where 15 wickets fell, and Sophia Gardens, where 12 batsman arrived and departed before the close. Play starts at 11am – bike willing, I’ll see you at Old Trafford.