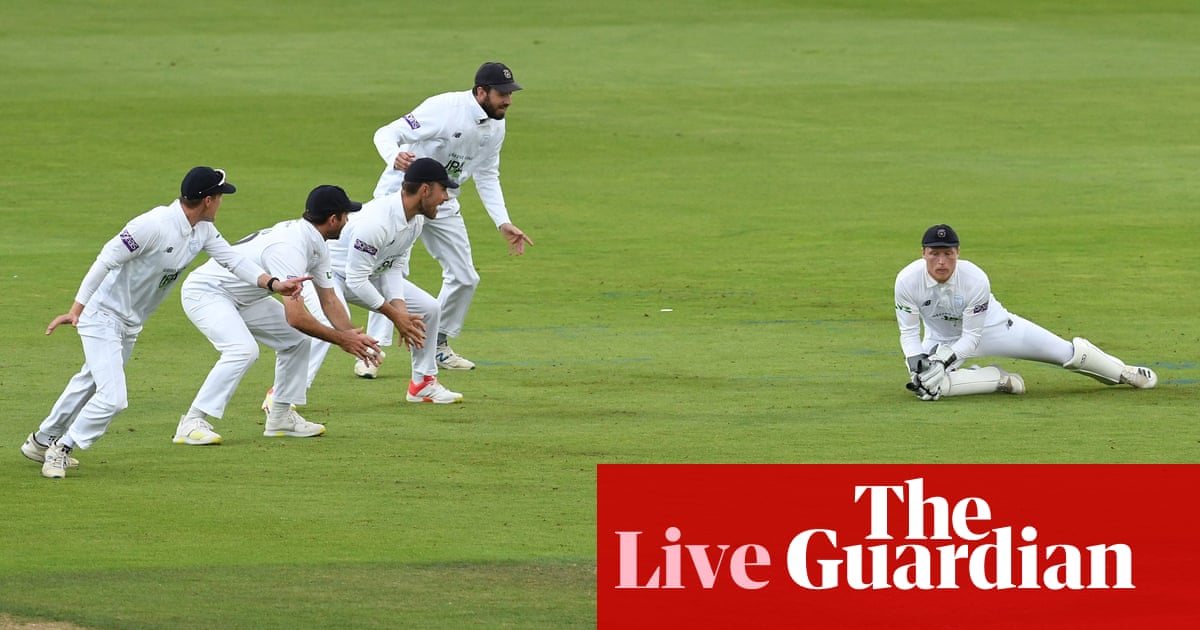 The happy japesters at Middlesex looked cooked when they got rolled over by Joe Leach and Ed Barnard for 144 at Lord’s, but they have justified their spot at the top of Div 3 by whittling down second-placed Worcestershire to 113 for 8 by the close. It’s the animal kingdom, in Tiger Tim and Bambi, who have done the damage there.

Kent, in third, have robbed the people of what the people want by resting Darren Stevens against bottom of the bottom Derbyshire ahead of T20 Blast finals day. Robbed! The arrogance! Honest Joe Denly and Matt Milnes are also on the couch. Robbed! In their absence, Kent made 285 yesterday which would have been 400 with Stevo, then when Derbs batted before stumps, Harry Came and Harry went. They’re 1 for 1, a score that works both in Derby and here in Melbourne.

Finally, fourth plays fifth with Leicestershire hosting Sussex. The poor young lads from down the coast had to chase leather while conceding about 4700 runs to Middlesex the other day, but now they’re 310 for 4. Ben Brown is Nelson not out.

Essex sit top of the pile, and well on top of Surrey at The Oval, where Alastair Cook’s 140 not out has taken them to 299 for 3. Cook likes that joint, it’s where he got his farewell Test ton after all. Dan Lawrence got out just before stumps for 78.

Second-placed Northamptonshire won’t be best pleased at home against fourth-placed Durham, who bowled out Northants for 183 yesterday with four to Matthew Potts, before reaching 108 for 4 by stumps. Scott Borthwick is 54 not out at first drop.

Then the battle of the GLs (my initials, very good) with Glamorgan placed last hosting Gloucestershire in third, but the Cardiff crew have reached 263 for 6 and have Edward Byrom coming back on 59.

Nottinghamshire are on top of the table, and well placed in their match. Visiting Hampshire, they kept the fifth-placed hosts to 226 with a spread of wicket-takers, and are resuming on 29 for 1 with Test opener Haseeb Hameed the only casualty late last night.

Second-placed Yorkshire are in rather more of a spot of bother against third-placed Warwickshire at Headingley. Sure, they bowled out the Birmingham lot for 155, with four wickets apiece to Ben Coad and Steve Patterson, but now they’re 95 for 8 in reply with only those two aforementioned bowlers to help The People’s Horse, Gary Ballance, who is 51 not out. Chris Woakes and Liam Norwell have three wickets each.

Lancashire and Somerset each need a lot of points from their match at Taunton, sitting fourth and sixth in the division, and Lancs look like getting some with 364 for 8 already on the board. Their No.9, Tom Bailey, will resume on 54.

Good morning, afternoon, evening, or Witching Hour, depending from where you are tuning in to another exciting episode of county cricket. This will be the first sequel in an ongoing franchise event. Day II: The Quickening. Prepare to be amazed, to be terrified, to hide behind your furniture.

My name is Geoff, you can email me in the usual way or plough headfirst into the scrum that lives below the line. Hello to you all.

This is indeed the second day of the second-last round of the second part of the season, deciding who will top each of the three divisions and who will play off for the Bob. Shall we?

A Milestone Anniversary Reiterates The Culture of Peace is a Movement, not a Revolution