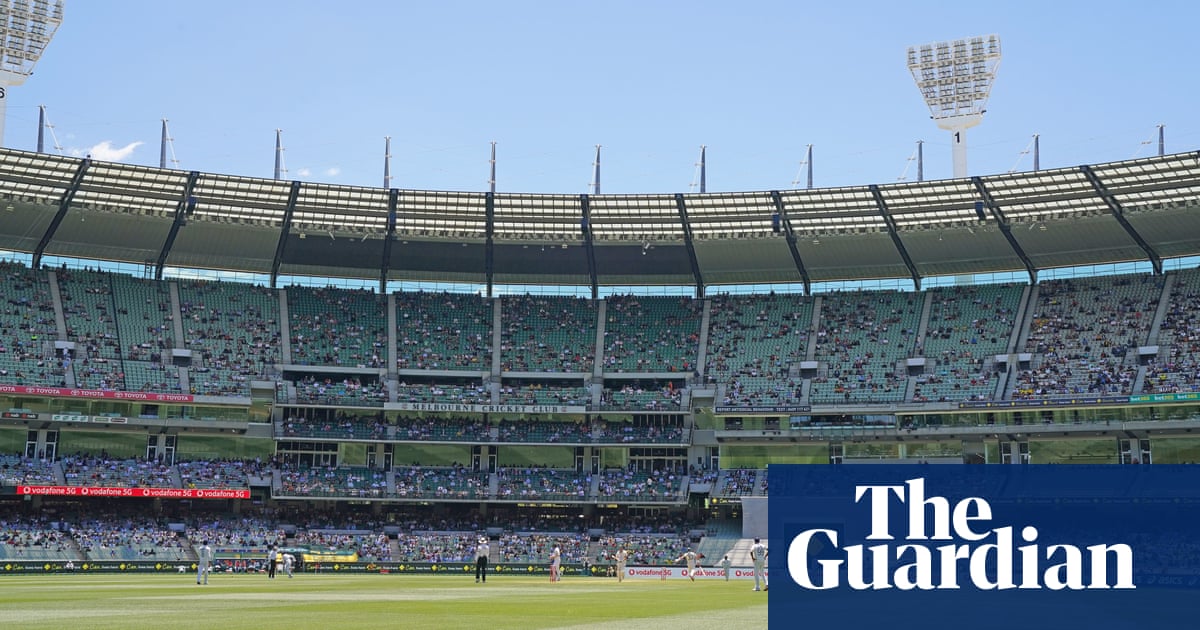 The Melbourne Cricket Club will implement Covid-19 protocols to welcome fans to the MCG for the Boxing Day Test but the ground’s capacity will not be limited, despite the Omicron variant increasing cases of the virus across Victoria’s capital.

The state’s acting premier James Merlino confirmed on Tuesday that a capacity crowd of over 90,000 people would be allowed to attend the match, although MCC CEO Stuart Fox said on Wednesday he anticipated a figure closer to 70,000 based on ticket sales so far.

“We’ve got the stadium prepped, a lot of protocols in place for Boxing Day, and we can’t wait to welcome fans back to cricket,” Fox said. “Huge build-up, we’re just keen to get going.”

Protocols at the ground will include checks for vaccination certificates at the gate, QR codes on entry and at some restaurants in the Members Reserve, cashless systems at bars and restaurants, and no entry for children under 12 unless accompanied by a vaccinated adult.

The measures are less strict than those mid-year during the football season, but authorities are waiting for news from an emergency national cabinet meeting on Wednesday that may introduce a mask mandate across the country. In the absence of that, aside from some indoor parts of the ground, Fox couched mask-wearing in the language of personal responsibility.

“We’re all used to wearing masks, and we’d encourage everyone to bring a mask at this point in time, and when you’re in congested areas we’d encourage you to wear it,” he said.

Yarra Park around the MCG will be used to space out people queuing for entry, who are advised to come earlier than usual given the slower process at the gates.

Professor Nancy Baxter, head of the Melbourne School of Population and Global Health, told the Guardian that it would be safest not to have the event, but that balance was required given the way the virus has derailed so many important parts of people’s lives.

“If they’re going ahead then masks should be used,” Baxter said. “No one is personally responsible for a pandemic. [Prime Minister] Scott Morrison used the analogy of skin cancer. My use of sunscreen doesn’t affect your risk of skin cancer. My wearing a mask affects your chances of contracting Covid.

“It’s a long day, people will eat and drink, which means that even people who are wearing masks will take them off. People will be shouting, people will be breathing each other’s air. If it’s important for people in Melbourne, if we want a safe event that everyone can enjoy – we probably shouldn’t be having the event, but we for sure should be wearing masks.”

With Melbourne back above 1,500 cases recorded per day, it seems almost inevitable that there will be exposures recorded at the Test match over the five days. That will also influence some people to stay away.

“There’s always risk, but we’ve got a Covid safe plan in place for a reason,” said Fox. “We had one significant issue this year at the football, and we’ve managed that quite well. We had the data through to Health within two or three minutes. We’ve got a good handle on it, and we’re confident that we’ll get through our five days.

“I’d be lying if I said there wasn’t a concern [but] people who’ve bought tickets will want to come to this event.”

After Melbourne the series moves onto Sydney for the new year’s Test, starting on 5 January. Any mask mandate imposed on large-scale sporting events by national cabinet would be nation-wide and as such also impact the penultimate match of the series at the SCG.