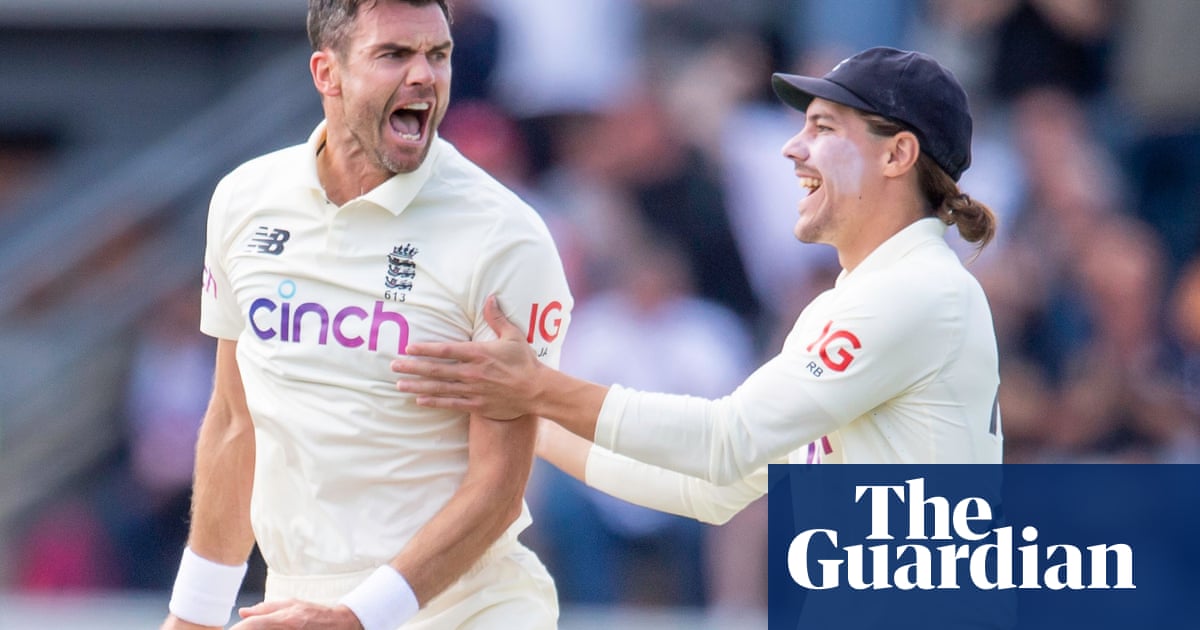 Jimmy Anderson could scarcely contain his delight after a dreamy first day of the third Test against India that saw England take a vice-like grip on proceedings.

Anderson’s three-wicket new ball burst helped skittle the tourists for just 78 all out – the ninth lowest total in their history – before unbeaten half-centuries from Haseeb Hameed and Rory Burns took Joe Root’s side to 120 for no loss at the close.

“It doesn’t get much better,” Anderson said. “Losing the toss, being asked to bowl and then putting in a performance like that. The way the two guys played towards the end of the day with the bat was outstanding and exactly what we’ve been asking for.

“With both ball and bat we’ve displayed exactly what we wanted to do. These days don’t come around very often so you just have to be happy when they do.”

After the travails and indiscipline of the last day of Lord’s that saw England go 1-0 down in the series, Anderson was thrilled by the control the bowling unit showed at Headingley and the results of a decision to cut out the verbals.

He added: “The way all the bowlers adjusted to the wicket with the lengths we bowled, the lines we bowled, was brilliant. We’ve talked about trying to bowl as a unit, as a group, and we just absolutely nailed it today.

“There was a bit of chat about [verbals]. We were making a point of focusing on us and what we do well. We have made a conscious effort of trying to focus on us, what we do well and ignore anything else – the outside noise or whatever else might be going on.”

The fortunes of the two sides were underlined by a couple of statistics: this was India’s third lowest total after winning the toss and batting first, while England’s represented the highest opening stand since Hameed’s Test debut during the second innings of their first Test against India in 2016.

And Anderson had high praise for Hameed, who will resume this morning on 60, having watched the opener emerge as a teenage sensation at Lancashire before the doldrums hit and move to Nottinghamshire in late 2019 was required to reboot his career.

“I’m absolutely delighted, I couldn’t be happier for him,” said Anderson. “Since he’s come back into the Test set-up you can see how much he’s worked on his game, how he’s become a better player. One thing he’s always had is the right temperament for international cricket and we saw that today in bucketloads.

“He was calm, he was measured and he had a game plan which he executed brilliantly. To see him play that way is not something we’re surprised by. Everyone is absolutely delighted for him.

“The way [Burns and Hameed] went about their business just felt so calm. The way they were so measured, they were solid in defence, left well and put away the bad ball when they got one. I just thought it was brilliant Test match batting.”

On his earlier removal of Virat Kohli for the seventh time in 23 Tests, celebrated with a guttural roar, Anderson added: “We’ve had some great battles over the years, he’s a fantastic player and someone you want to keep quiet.”