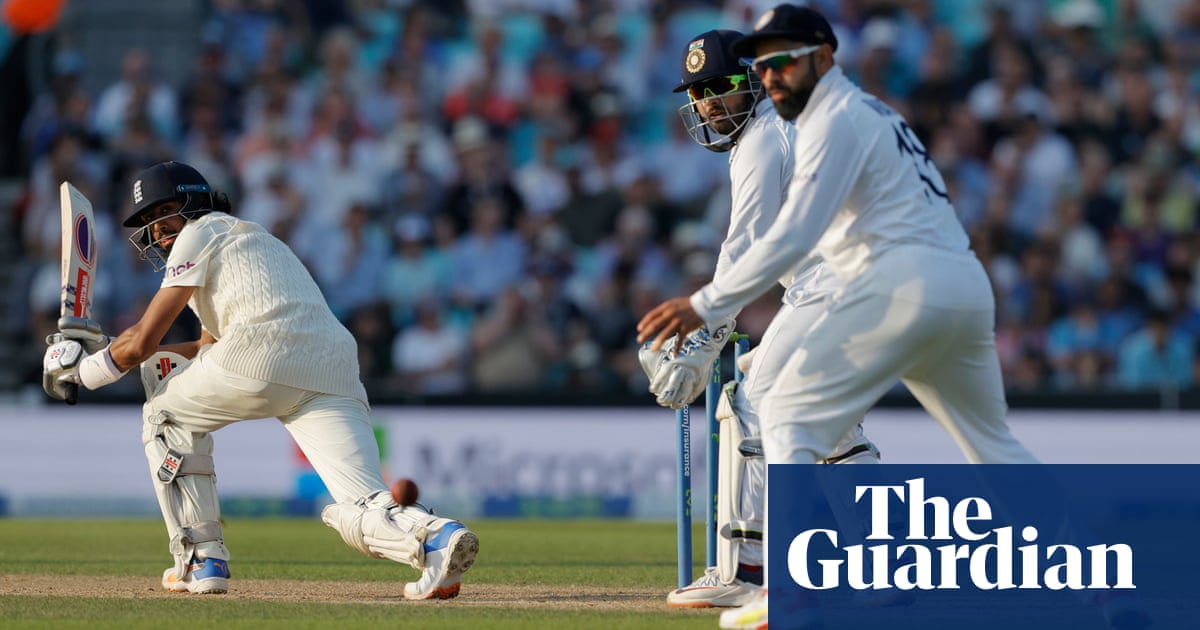 As the shadows lengthened on the fourth evening, eventually engulfing the outfield at the Oval to end a day of glorious sunshine, England’s opening pair of Rory Burns and Haseeb Hameed made an encouraging start to what is a tilt at history.

A dispiriting performance in the field from Joe Root’s side had seen India put 466 all out on the board just after tea and with this a target of 368 in four sessions had been set. It will be England’s all-time record run chase if achieved, surpassing the 359 that Ben Stokes raided against Australia at Headingley two years ago, and by reaching 77 for no loss by the close, thoughts of another miracle lingered.

A must-see final day is now in store and in the morning, with 90 overs due to be bowled, Burns will resume on 31 from 109 balls and Hameed on 43 from 85. The way this left-right pair played for just over two hours highlighted a pitch that may have started off green on Thursday but, bar the prospect of variable bounce, appears to have few demons. Stokes may be absent but a run-rate of just over three is not impossible.

India are the favourites to take a 2-1 series lead, of course, and know the sheer cliff face of runs staring at the hosts will still be imposing even after a night’s rest. Hameed looked particularly fluent after his first innings duck, slotting six fours – two of them off Mohammed Siraj’s final over – while Burns knows the vagaries of the Oval more than any player on either side. But day five will be an uphill psychological challenge.

The tourists, powered by Rohit Sharma’s century on the third day and scores of 61 from Shardul Thakur and 50 by Rishabh Pant 24 hours later, require just 10 individual moments to be seized and though Ravichandran Ashwin is absent – the off-spinner spending his fourth Test in succession perched on the balcony – in Ravindra Jadeja they have a probing left-armer with over 200 Test wickets of match-winning nous.

India nearly produced a couple of chances late on too. Burns flirted with disaster when setting off for a run off Jadeja and short-leg missed with a tight shy at the stumps, while Hameed survived a reviewed lbw off the bowling of Siraj. The latter, shown to be missing on height, represented a first burned review by Virat Kohli and who knows, perhaps even a sign of some early desperation creeping in.

Hameed and Burns had sprinted off the field at 4.21pm while a collection of weary, sweaty bowlers laboured in their wake. Spending 11 hours in the dirt had stuck a troubling number of miles on the clocks of Jimmy Anderson (47 overs in the match) and Ollie Robinson (49.3). Even if England somehow escape without a defeat, those extra miles may yet prove the most significant blow struck by the tourists looking ahead to Old Trafford.

Though already leggy, the fourth day had started so positively for Root’s men, a sell-out crowd basking in September sunshine and looking on as Chris Woakes continued a fine Test return with the removals of Ravindra Jadeja and Ajinka Rahane, both lbw, in the space of eight balls. When Moeen Ali teased out Kohli for the sixth time in Test cricket, caught at slip for 44, India were 312 for six with a lead of 213.

Kohli had looked in ominous touch too, with the early news of head coach Ravi Shastri’s isolation due to a positive Covid-19 test followed by a succession of tracer bullets from his captain. But instead it was Thakur and Pant who broke English spirits out in the middle and fired up those with dhol drums in the stands, their stand of 100 from 155 balls either side of lunch providing the latest swing of the pendulum.

This was a second-half century of the match from Thakur, an all-rounder who boasts a first-class average of just 16. His appetite for the big stage has already been shown by the 67 in Brisbane that set up India’s victory in Australia earlier this year and when he drove Robinson’s (presumably intentional) slower ball for six, and then slotted Anderson for a crisp drive to take the lead past 300, this value was underlined again.

For Pant, registering his first half-century of the series before finally plopping a return catch back to Moeen, it was a case of trusting the surface and thus his defence with it. The skittish innings witnessed this far, when the left-hander looked to meet the moving ball halfway down the pitch, was replaced by an innings of responsibility.

Anderson and Robinson were willing but running on fumes, Moeen struggled to contain going at 4.5 runs per over and Overton had become totally unfancied by Root such that by the time India reached tea on 445 for eight, leading by 346, a 27-year-old supposed workhorse had sent down just 16 of the 144 overs.

Add Moeen’s failure to run out Pant on 37 – shying at the stumps when he could almost have walked the ball home – three burned reviews off his bowling and six catches going down across the two innings, England’s issues went beyond a flagging, samey attack.

But then India’s punishing innings, the longest by a touring side since South Africa ground out 167 overs for a draw at Lord’s in 2008, said as much about a collective lack of ruthlessness from England’s middle order in their 290 all out first time around. One of Pope (81), Bairstow (37) and Moeen (35) should really have gone on and the latter’s attempt to launch Jadeja into the Thames, 13 overs from the second new ball when runs were there to be milked, still jarred 48 hours later.

Still, a chance to atone has presented itself. The sight of Pant finally playing responsibly, and two tail-end rabbits in Umesh and Bumrah thrashing 25 and 24 at the back end, underlined how flat this pitch has become.

England may have been put through the mangle in the field but a dent in the target was achieved and for India the non-selection of Ashwin may yet prove an awkward one.