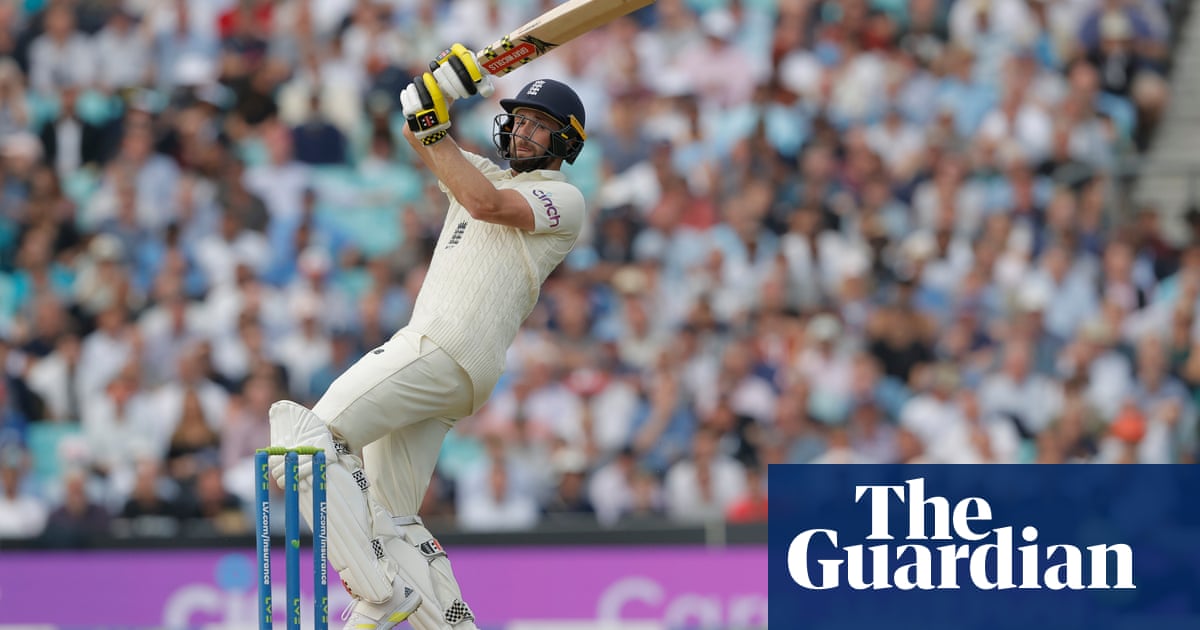 James Anderson shuffles down the Oval steps with all the enthusiasm of a man boarding a rail replacement bus service to Norwich. Deep down he knows it’s probably for the best, and yet the very act seems to inspire a bodily rebellion in him. These days there are few sadder sights in international cricket than watching Anderson walk out to bat, and in large part this is because you know what awaits him out in the middle.

Anderson has never been a good batter, but for a long time he was at least a willing batter. He would stride out with a kind of soldierly purpose, all gallant defiance and stony concentration. But the Anderson who once went six years without a Test duck and cuffed his way to a riotous 81 against India at Trent Bridge is long gone, replaced by a sitting target whose primary objective is not to score runs but to avoid getting hurt. In the last year, he averages a shade over four.

In a way, Anderson’s gentle retreat with the bat is a microcosm of a broader trend. So far in 2021, England’s lower-order – batters No7 to No11 – average just 13 runs per innings, the lowest of any calendar year since 1999. Famously, that was the summer when England lost to New Zealand with a tail of Andrew Caddick, Alan Mullally, Phil Tufnell and Ed Giddins: not so much a last line of defence as the cricketing equivalent of the fine savoury dust you get at the bottom of a packet of cornflakes.

The curious part of all this is that England’s current batch of tailenders are, by and large, decent batters. Ollie Robinson and Craig Overton have first-class centuries. Mark Wood can hit a devastatingly long ball. Stuart Broad has more Test runs than Victor Trumper. Individually, they can all hold an end up and more, and yet until Thursday it had been India’s far weaker tail that had made the more telling contribution to the series.

No, the problem here is not one of technique or talent, but of tone. The statistics tell their own story, but the wider tale of England’s lower-order batting is of a gradual, incremental loss of fun. Under Chris Silverwood, himself a largely dour and doughy tail-ender, this is an England team that of late has valued extreme competence, practised seriousness, digging in and getting in line and putting a price on your wicket and not doing anything silly.

All of which is fair enough for a top order that has been struggling to grind out big totals. But tail-end batting really demands a very different sort of skills, indeed a different sort of cricket entirely, one more akin to music than science. Broad, for all his sharply declining returns with the bat in recent years, has always instinctively understood this: the way a quick thrash or jazzy cameo can put a sparkling new complexion on the game, shift the momentum, force a thirsty fielding side onto the back foot.

The most successful England teams have always grasped this. What’s Graeme Swann’s Test batting average? I don’t know, and I’d wager he probably doesn’t either. But time and again during England’s golden era he would play an innings that changed the game, quickly and all at once. Even the zanier Trevor Bayliss teams would often dig themselves out of trouble with a lawless lower-order blitz from Moeen Ali, Chris Woakes, Sam Curran or others.

And as fate would have it, Moeen and Woakes were back in the saddle here, at No8 and No9 respectively. Both, admittedly, were batting a position lower than normal because of Overton’s promotion the previous evening, but it felt like a throwback to better times in more ways than one. And as England slowly shrugged off their uncertain start, as the clouds parted over The Oval, as Ollie Pope finally made good on his promise, it was Moeen and Woakes who were instrumental in swinging the game England’s way.

Often you will hear it said that Moeen is far too good a batter to bat at No8. But in another sense, he’s far too unserious a batter to bat any higher. Here he flashed the ball through the slips, thrashed it behind square on the leg side, creamed it straight and through the covers with a Caribbean relish. After he was out trying to hit Ravindra Jadeja over the Thames – a proper, respectable tail-ender’s dismissal – Woakes took over with a mixture of textbook cricket shots, agricultural hewing and cheeky singles. By the end, with England 99 ahead after adding 139 for their last four wickets, with India adrift and bereft and disgruntled, even Anderson had to smile.

And this, ultimately, is the true value of the lower-order rearguard. Those last four partnerships felt like an entirely different game from the six that had preceded them. This is the energy that England need to try and capture and bottle and reproduce over the rest of the series and beyond into the Ashes. If they succeed, we may remember this as the day they turned the tide.