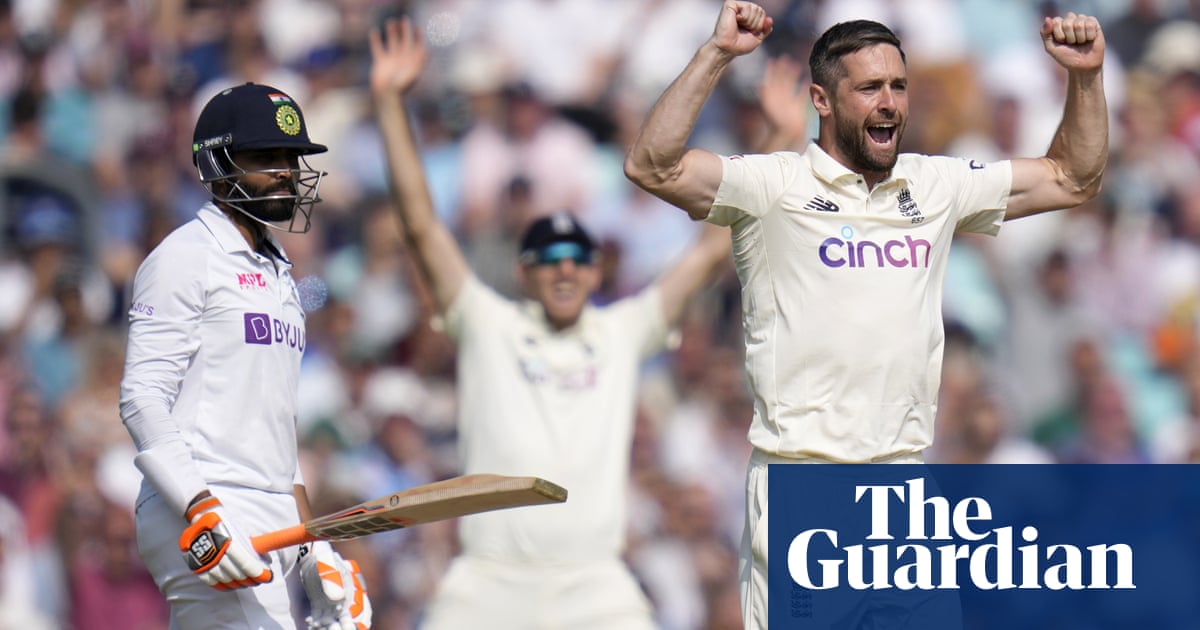 England find themselves needing to create history if they are to end a gruelling few days with victory at the Oval, after India posted a second-innings total of 466 to set a daunting victory target of 368. But after spending the majority of the fourth day toiling in the field before watching England’s opening partnership of Rory Burns and Haseeb Hameed put on 77 without loss in the final session, Chris Woakes insisted that conditions are such that “you can chase any score on this wicket”.

Another 291 are required to win, with 90 overs in which to score them or, failing that, to survive to claim a draw. “To go all the way and chase down that score would be an incredible effort,” Woakes said. “The guys have done a great job tonight and put us in a great place, but tomorrow morning’s going to be tricky again. To get 290 on a day-five pitch always sounds like a tough ask but we’ve got to remind ourselves that the pitch is a great one for batting and we can do it if we put our minds to it.”

For all their recent batting issues, England know they have it in them: of their 10 highest successful fourth-innings run chases one came last year, against Pakistan at Old Trafford, and the highest of all was achieved against Australia at Headingley in 2019. “This team has done some special things over the last few years in all different formats,” said Woakes. “We’ve definitely got the belief we can get the win and a lot of the time it’s just a matter of believing – then you’ve got to go out and execute.”

It took England a little more than 148 overs to dismiss India in their second innings, with both Shardul Thakur and Rishabh Pant scoring half-centuries on the fourth day. The seam attack did much of this work, with Woakes and Ollie Robinson each bowling 32 overs and Jimmy Anderson 33, and the final Test starts at Old Trafford on Friday.

“Obviously we’re feeling it,” said Woakes. “I think we’ve all bowled 45 overs plus in the game and naturally you’re going to be a bit sore. I was speaking to Jimmy in that second innings, saying that there’s occasions in England when you can almost bowl at 90% but on this pitch you had to slam every ball in, and that takes it out of you.”

India will have to go into the decisive day, as well as the final Test, without their head coach, Ravi Shastri, who is self-isolating after testing positive for Covid on Saturday night. Three further members of the team’s support staff – the bowling coach Bharat Arun, the fielding coach Ramakrishnan Sridhar and the physiotherapist Nitin Patel – are also isolating after being identified as close contacts.

“He was having a little bit of discomfort yesterday so the medical team decided to do a test,” said the batting coach, Vikram Rathour, of the 59-year-old Shastri. “Of course we are missing them all massively. It was a bit of a distraction in the morning. We had a word, we spoke and decided we had to focus on the issue in hand, which is the cricket. It was an extremely important day for us and the boys did well not to get too distracted by the situation that happened on Saturday night.”

One person who could be available for the final Test is Jos Buttler, who missed this match to be with his wife, who was expecting their second child. The birth of their daughter, Maggie, was announced on Sunday morning.