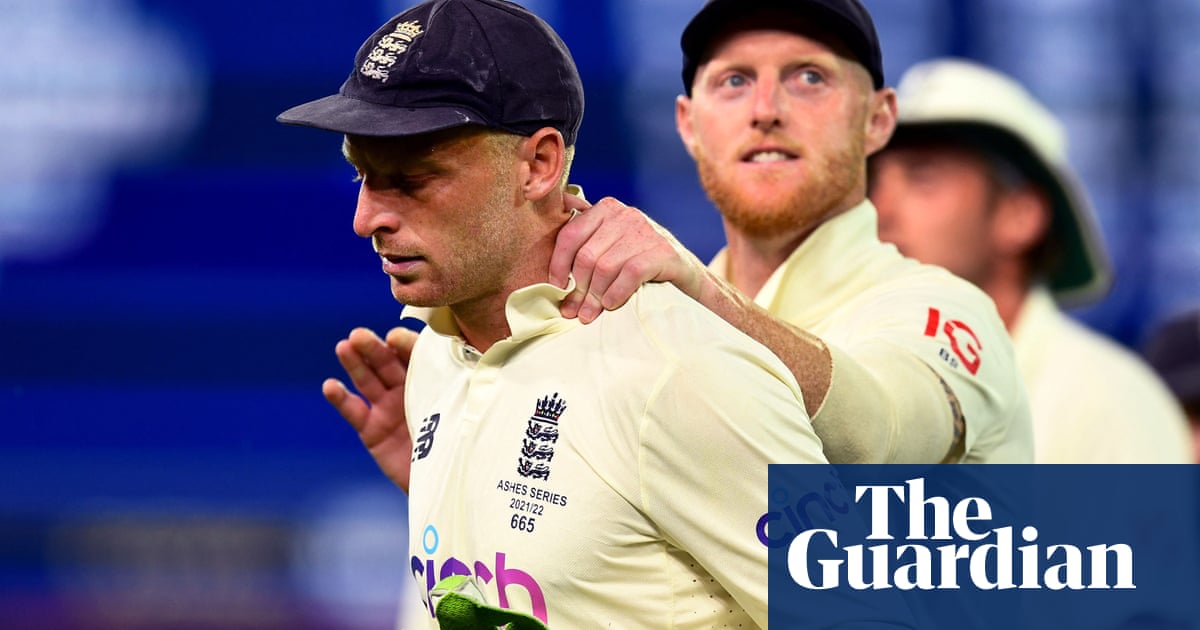 England have promised to “fight hard” to turn the second Ashes Test in their favour after leaving the field at the end of the first day with memories still fresh of the inexplicable drop from Jos Buttler behind the stumps that reprieved Marnus Labuschagne. Having started the day dealing with the absence of their captain, Pat Cummins having been ordered to self-isolate as a close contact of a confirmed Covid case, Australia ended it in a position of strength on 221 for two at the Adelaide Oval.

“Jos is going to hurt tonight but he’s going to have to get out of bed and come again and enjoy his day tomorrow, because that’s what Test cricket’s all about,” said Graham Thorpe, England’s assistant coach. “Anyone who drops a catch is always disappointed. He’s a human being – it’s a bit like being a goalkeeper, you keep magnificently throughout the day but if you drop a catch it gets highlighted. We’ll get round him and try to be philosophical about it as well, because I think you have to be. At the end of the day you’re playing a game of cricket.”

Labuschagne, who was on 95 at the time and did not add to his score before the close, was also dropped by Buttler when he was on 21, albeit from a harder chance. “I don’t know how that happened,” Labuschagne said of the second drop. “A bit of disbelief, but my job is to make sure I capitalise on that tomorrow.”

England’s will be to ensure he does not, with the second new ball just nine overs old and still offering some movement. “It’s very important that we’re able to get in and make some inroads tomorrow,” Thorpe said. “We’re going to have to roll our sleeves up and show some fight.”

As expected Jimmy Anderson and Stuart Broad returned to the side, and with Jack Leach missing out England bowled 78 overs of right-arm seam, with only Joe Root’s off-spin providing a significant change. “I thought we picked the right team for this match and on another day we could have grazed the edge more and it could have been different,” Thorpe said.

“They may all be right-arm bowlers but for me they’ve all got a slightly different style about them. We stuck at it well but we didn’t quite get the rub today – if we’d bowled poorly we’d have gone for a lot more. It’s not about feeling sorry for ourselves when we come in tomorrow, it’s about trying to do very similar things.”

David Warner, whose participation in the match had been in doubt because of a rib injury, played with the aid of local anaesthetic and painkillers and made 95 – the second time in as many games he has been dismissed in the 90s, and precisely the same number of runs he scored in the entire series in England in 2019. “The last couple of days I was in a bit of pain, a bit of agony, not being able to pick up the kids, which is a bit tough,” he said.

Having won the toss and chosen to bat first, the absence of Cummins, who was in a restaurant on Wednesday night on an adjacent table to someone who has tested positive, has not yet been felt. “The rules for us are three players can be at a venue. We have to check in with each other to see what restaurants everyone’s going to,” Warner said.

“You can’t help what happened with Patty, unfortunately he was in a spot where somebody had tested positive that day. He probably won’t be the last. It’s just being smart, isn’t it? Don’t go where you think restaurants are going to be jam-packed. Thankfully it’s a day-night game and we don’t have to worry about that now.”