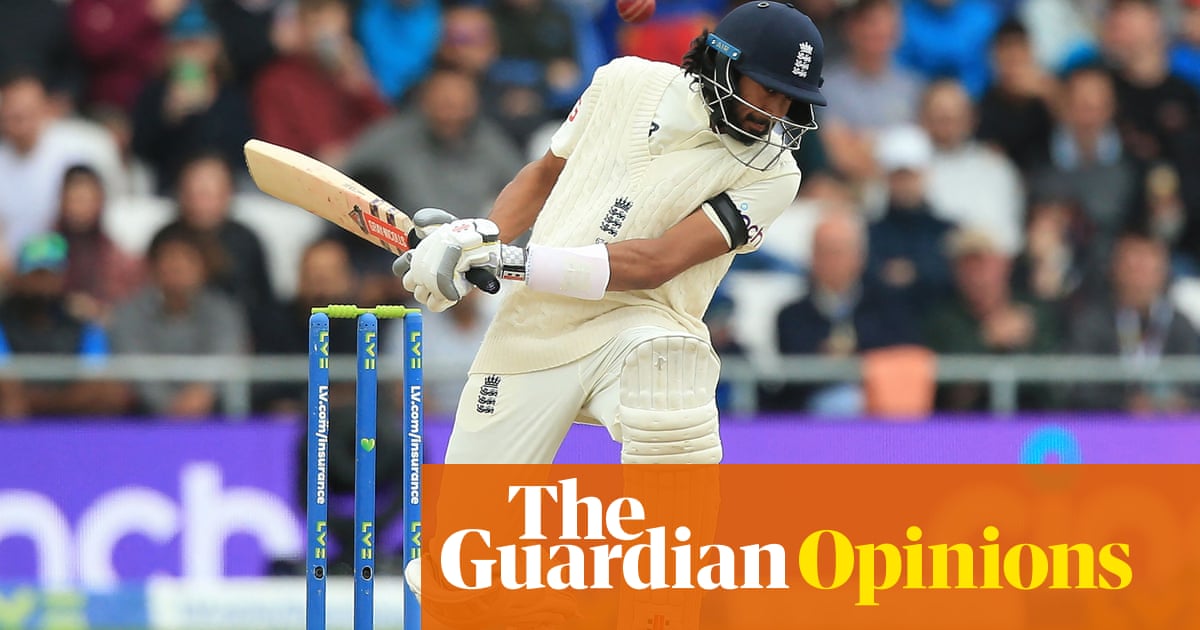 There was a rather tender moment after lunch on day one, as Joe Root gathered his England team into their traditional post-interval huddle. This can be a deceptively fraught moment for a captain, geometrically speaking. Allow the same faces to occupy their usual place in the huddle, and you risk letting cliques develop. Huddle too quickly or in the wrong place, and you can kiss goodbye to your dreams of a perfect circle. Watch Kane Williamson’s New Zealand team if you want to see it done properly.

The code-red scenario for a captain occurs when the huddle has formed, all the gaps have closed and there’s someone left on the outside, scampering frantically around the circle looking for a way in. For some reason – and read into this what you will – this always seemed to happen to Kevin Pietersen, who would end up clasping himself loosely around two unyielding teammates and almost certainly missing a good proportion of what was said. It wasn’t easy being him in that huddle.

By contrast Root, with all the anticipation and spatial awareness you would expect from one of the world’s greatest batsmen, had noticed as the huddle was beginning to close that Haseeb Hameed was about to be excluded from it. And so he did a lovely thing. He opened the huddle back up, threw out his right arm and took Hameed in under it, holding him as tightly as he would a little brother. Then, and only then, did he begin speaking.

Instinctively, I think, this fits in with how most of us feel about Hameed, a man who seems to inspire vaguely parental feelings among many England fans, and perhaps even his own teammates. You want to coddle and cuddle and cosset and swaddle him. You want to hold him close and protect him from anything bad that might happen. You want to stroke the hair of this grown man of 24 and tell him everything is going to be OK.

After five years of turmoil and gloom, Hameed is opening the batting for England again, and scoring runs again, and there is a part of us that wants it to be like this for ever. The warmest reception at Headingley so far has been not for James Anderson or for Root but for Hameed’s half-century on the first evening, an innings that in its effortless class and narrative circularity seemed to fulfil some deep multi-layered yearning: for an opener who didn’t just score runs or occupy deliveries, but made us feel something.

Anyway, that was day one. On day two, by contrast, Hameed batted for almost the entire morning session, faced 65 balls, and moved his score along from 60 to 68. It took a delivery of rare perfection from Ravindra Jadeja to extract him, by which time England were 159 for two and had pretty much won the game. His opening stand of 135 with Rory Burns was England’s highest in Test cricket since 2016, when Hameed himself partnered Alastair Cook to 180 in Rajkot. He faced more balls than even Root.

As returns to Test cricket go, this was a job stirringly well done. Even so, I’m still vaguely fascinated by those 65 balls he faced in the morning session, and in particular the 29 consecutive dots that culminated in his dismissal: a period during which Hameed looked serene, untroubled, well-balanced and yet almost entirely shotless.

Hameed scores his 68th run off his 166th ball, glancing a ball off the stumps into the leg-side. This in itself is a measure of just how well he was aligned, working the ball from off to leg, playing it right under his eyes. For the remaining 29 balls of his innings, including four consecutive maidens from Jasprit Bumrah, he doesn’t play a single attacking stroke. He plays 12 defensive shots, ducks the ball eight times, leaves it five more times, edges the ball once, gets hit on the pad once, and gets pinged on the helmet once.

The 29th ball, from Jadeja, he tries to block and misses. It might not make a blind bit of difference to the game. But if Hameed is going to enjoy any kind of Test career, it’s worth examining in detail. All the ingredients were there for a big score: a solid platform, a demoralised attack, almost unlimited time. The sooner Hameed finds a way to navigate these tough periods, develops his ruthless streak, the sooner he can start his second career in earnest.

There’s greatness in there, and it’s a greatness that shouldn’t be satisfied with 68 on a flat pitch when there was more out there. Buoyed by a wave of immense goodwill, his own hard work and the affection of a cooing public, Hameed has got himself back in the game. The next part, he’s going to have to do by himself.