‘He’ll be puffing his chest out’: Cummins says Warner in the mood for England 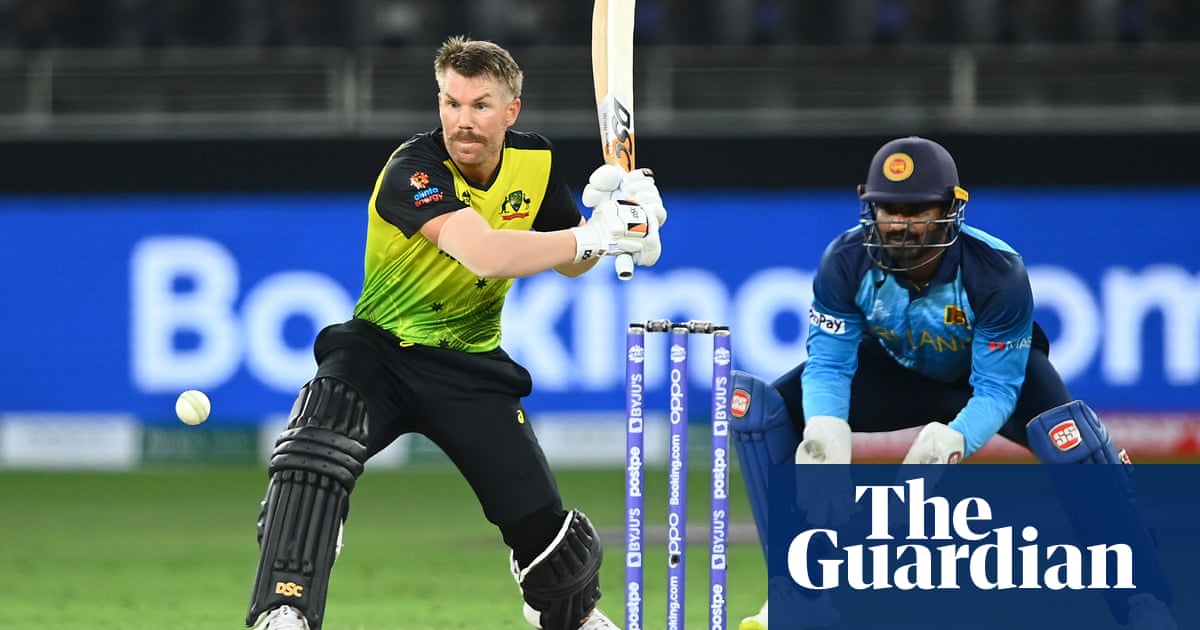 It could be argued that the first crucial moment of Saturday’s match between England and Australia took place 48 hours before it is even scheduled to be played, when the only Englishman involved was umpiring.

Australia were in the fifth over of their innings against Sri Lanka, their second game of the Twenty20 World Cup, when David Warner gloved a catch to Kusal Perera that was so easy Richard Illingsworth started raising his finger even before the formality of collecting the ball had been completed. Perhaps Perera had also started to raise his hands in triumph – that at least would explain why they were not in the right place to actually take the catch, and instead the ball was fumbled to the ground.

And so it is that one of the world’s most destructive but most bewilderingly out-of-form batters, a man whose only T20 innings in nearly six months before this tournament began yielded scores of zero, two, zero and one, who had managed 14 in his first match of the World Cup and was on 18 at the time, was allowed to motor to 65 and now roars into the England match in full confidence.

Between them Warner and his captain and fellow opener, Aaron Finch, scored 102 runs off 65 balls, bludgeoning into meek submission a Sri Lanka team that had started the evening well before Adam Zampa asphyxiated their innings in the middle overs. An England side that has coasted to two victories without ever being truly challenged is now preparing for a very different experience.

“You saw on Thursday how you can make a reasonable chase look pretty good if you get off to a good start,” said Pat Cummins, who took two for 34 against Sri Lanka. “I think the powerplay is huge, and having confident batters in form that can really take that apart is just huge, it sets up the whole batting innings.

“David’s a huge player for us. For the last decade he’s been huge for Australian cricket. He’s fantastic and he likes to take on the big teams – I’m sure tomorrow you’ll see him puffing his chest out. It’s fantastic to see him back in the runs. We always knew they weren’t far away.”

Australia rather limped to victory in their opening game, restricting South Africa to 118 runs but then taking 118 balls to reach their target. The game against Sri Lanka saw a significant improvement, most notably with the bat, with the only negative being the pasting taken by the two players who shared the fifth bowler role, Glenn Maxwell (whose only over went for 16) and Marcus Stoinis (whose three cost 35).

“Against South Africa we just snuck over the line, but felt that got us into the tournament,” Cummins said. “I thought against Sri Lanka it was a fairly complete performance, the way everyone played their part. We’re covering a lot of areas with that fifth bowler – the flexibility that structure gives us is just huge. Maxy bowling one in the first six means Mitchell Starc can have an extra over through the middle, and you saw he took a couple of wickets in the middle overs. At the moment I feel whichever way we go, we’ve got plenty of options.”