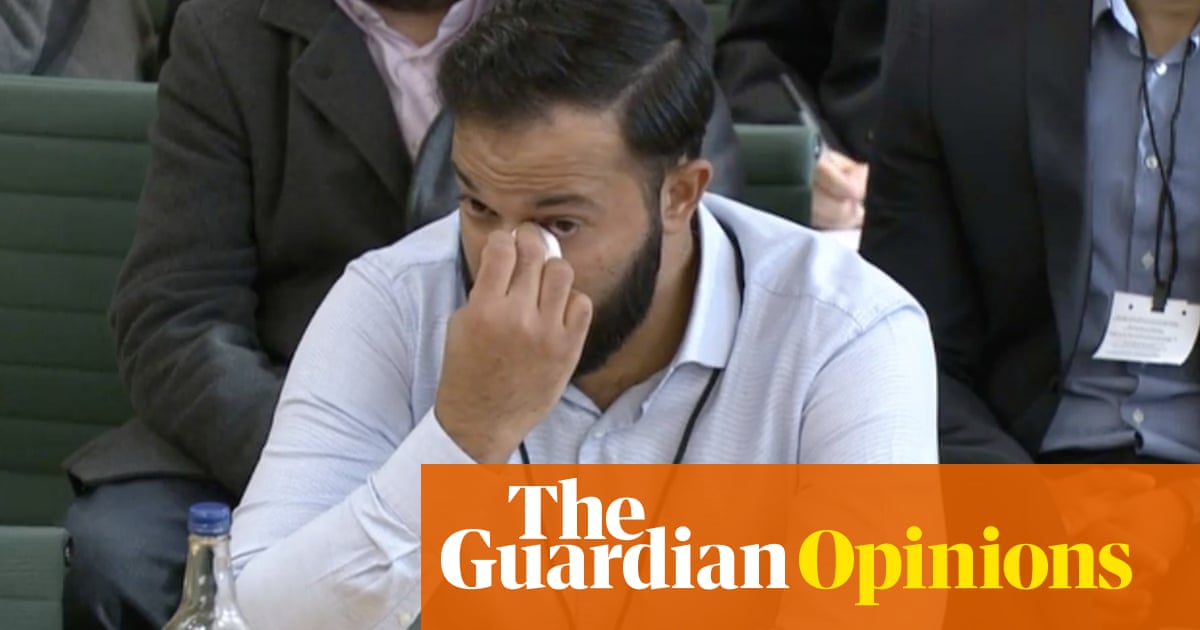 Days after Azeem Rafiq revealed the torment he faced as an Asian player, the situation at Yorkshire cricket club looks no better.

His account, of being ostracised, of being referred to by the P-word and by names he knew to be racist codes, of the complicity of teammates, of managers, of the tawdry attempts by prominent figures to discredit him, now lives as a shameful historical testament. Years from now, it may be the moment eyes were opened and things got better; rather that than as a missed opportunity.

Giving evidence in parliament, Lord Patel, the new chair of the club, said it should echo the impact of the Stephen Lawrence case and its aftermath. Some have questioned that statement, wondering whether it makes a false equivalence. Lawrence was brutally murdered by racist street thugs. Rafiq, for all his travails, is alive to tell his tale and denounce his abusers.

But it’s not a false equivalence. As a reporter, I sat through the Stephen Lawrence inquiry and covered the aftermath; and what I felt was an overwhelming relief that at last there was no hiding place for those who sought to dismiss or denigrate the experience of being black in Britain. A Britain that offered shamefully unequal services, protection and life chances to people who looked like me. The covers were off, the dirty linen exposed to sunlight.

I imagine, after Rafiq – an elite sportsman who found that all the skill and talent in the world couldn’t compensate for the fact that his skin is brown – told of what happened to him, fellow Asians today feel a bit like I felt then. At last, there is our truth: in Technicolor, in public, and seared on to the public record. A Lawrence moment indeed.

Roger Hutton, Lord Patel’s predecessor as chair, said events prove Yorkshire cricket club worthy of the label institutionally racist. I’d go further. I would say that what we have here is a textbook example of what happens when an institution fails in its duty to its employees and wider society.

Handing down his definition of institutional racism after the Lawrence inquiry, William Macpherson referenced collective failure and “processes, attitudes and behaviours which amount to discrimination through unwitting prejudice, ignorance, thoughtlessness and racist stereotyping which disadvantages minority ethnic people”. At Yorkshire, there was a prevailing culture, unwelcoming and exclusionary to those born outside the county – and to cricket-mad minorities within the county itself – to the point that Asian players felt they had to set up their own clubs and own leagues.

There was a neglectful culture which allowed one strong individual to set the tone. I have covered similar cases of discrimination in the armed forces, where there was usually a middle-ranking figure, perhaps a sergeant, whose racist behaviour calibrated attitudes within the unit. Others would follow this overtly racist lead, either because they were of like mind or for their own advancement or self-preservation. Within that prevailing culture, some individuals may have been privately supportive of the victims of discrimination but were also wary of taking a vocal stance.

Apply that to Yorkshire. Consider the role within that rotten neglectful structure of an abusive and senior protagonist, Gary Ballance, who became captain in 2016, at which point Rafiq says his problems truly escalated. Ballance has since apologised for at least some of his alleged behaviour.

Consider the accounts of players who were there at the time, when Rafiq says abuse was open and prevalent. Some, like England’s Joe Root, say they cannot recall any abuse. Rafiq says they are good men, but so normal was the abuse that it probably did not register with them. People “didn’t think it was wrong”. That chimes. Racist institutions are rarely clouded in smoke; more often they are filled with air of invisible toxicity.

Consider the way Yorkshire, facing formal complaints, initially investigated and downplayed their severity, and sought to exonerate itself, just like Scotland Yard used to do. Worth remembering that part of the discriminatory process highlighted in Macpherson’s definition involves the institution ferociously defending the status quo and turning its guns on those who seek to change it.

Among the figures called out by Rafiq were media commentators who sought to undermine him, to lessen the impact of his complaints. I once had a figure close to the Ministry of Defence privately caution me against writing any supportive stories about one black soldier who had complained of discrimination on the basis that, “entre nous”, he was not a victim, just a moaner and incompetent. That’s funny, I said: then why was he promoted, lauded and used to boost recruitment? There ended that negative spin operation. Those who have spun against Rafiq have fared no better.

Clearly the game of cricket has to take a long hard look at its structures. But let’s not pretend this is just about cricket. Here we see elite sportsmen in elite structures behaving with no more decency than yobs in a high street. Talk to minorities in all manner of professions, at all levels, and they’ll tell you that those who marginalise them often sit in courtrooms, boardrooms, salesrooms and newsrooms. Rafiq is no paragon of virtue, but for all his acknowledged faults, he is a man who got to the top of his profession and found that even there the air was toxic.

Think too about the building of teams. In sport, teamwork is crucial, but the same is true of commerce and industry. What’s clear is that at Yorkshire, the successful building of a team meant not the bringing together of diverse talents and backgrounds, but instilling physical and or cultural homogeneity. To be selected and accepted, you do what we do.

Thus it is no surprise that, at age 15, teammates forcibly poured red wine down this young Muslim’s throat. He subsequently drank with teammates because he felt he had to. How many other minorities, in other fields, find they have to contort themselves, perhaps lose themselves a bit, to be part of the team?

At Yorkshire, alleged abusers have been named and shamed. Already more allegations in other teams are emerging. But if this is to be a watershed moment, surely it is important to recognise that the pattern of behaviour described by Rafiq is not only about cricket, or Yorkshire, or sportsmen behaving badly. It is about what still lies beneath in our society. Rafiq held up a mirror. The task now is to decide how to change what we see.