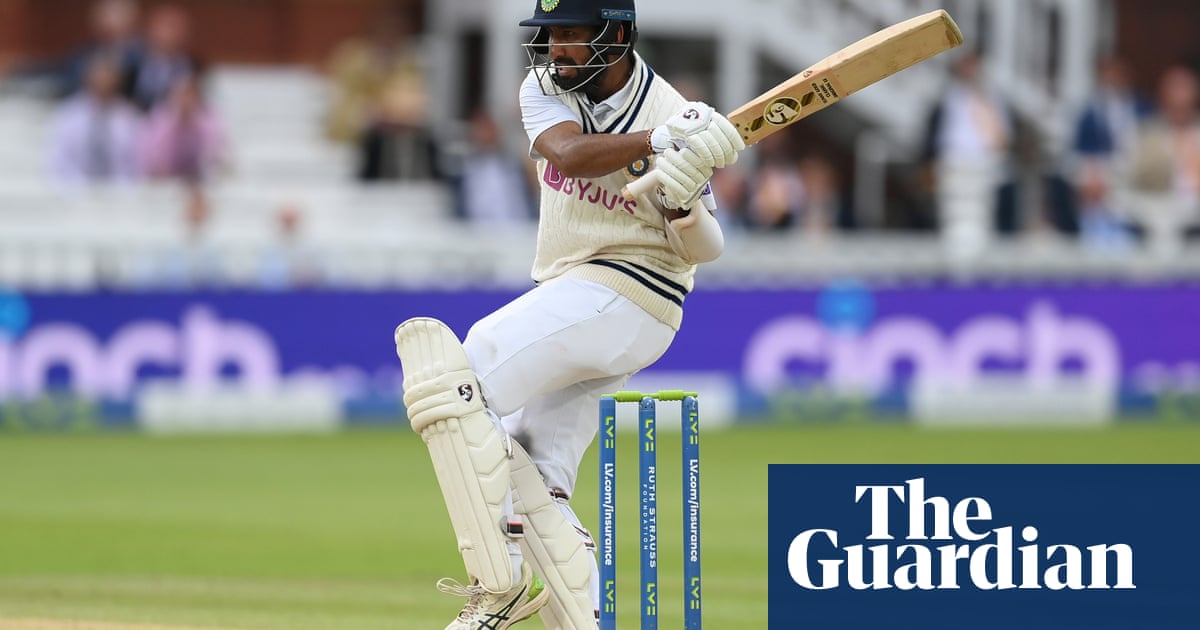 The cameras try to pick him out on the India balcony. And right at this moment, with the second Test agonisingly poised and Lord’s a hive of tension, the next man in is reclining across a bench, watching the game from a horizontal position.

Yes: who doesn’t love Pant? Pretty much everyone at Lord’s wants him to come in as soon as possible: all the England fans, all the neutrals, and a pretty sizeable proportion of the Indians too. Pant is the sort of player you look forward to seeing when you scan your ticket and walk through the gates in the morning. Pant is the sort of player for whom you put the television on.

Cheteshwar Pujara is none of these things. Of course, he knows this as well as anyone. He’s long since accustomed himself to the begrudging comments from the opposition, the slow groans and ironic cheers from the stands. It was during the tour of Australia in 2018-19 when an exasperated Nathan Lyon grumbled: “Aren’t you bored yet?” And yet somehow in the past few months, it is the murmurs of discontent from within India that have begun to swell.

It’s 33 innings since his last Test century. The statistics say he has mysteriously lost the ability to score against full-length deliveries. The fans clamour for the young blood of Prithvi Shaw or the swinging blade of Suryakumar Yadav. The pundits complain that Pujara’s stonewalling is all very well in Australia, where batting gets easier over time, but here you will inevitably encounter a ball with your name on it. He comes into this innings averaging 26 in England. Fifty minutes later, he still does.

Let’s take a moment to examine the scene that Pujara enters. Joe Root, fresh from his 180 on Saturday, was having one of those mornings when everything he touched turned to pure milk chocolate. He took off Ollie Robinson after two perfectly acceptable overs on a hunch, and replaced him with Mark Wood; Wood responded by cleaning out KL Rahul. He moved Moeen Ali 10 yards to his right at deep square leg; the very next ball, Rohit Sharma hooked the ball straight to him. It was a pure, crisp Sunday morning, and Lord’s was heaving and swaying to Root’s gospel.

The natural instinct of the fan in these situations is to counterattack: to recoil and retaliate, and reclaim the narrative. Arguably this is particularly true of the modern Indian cricket fan, reared on a diet of IPL, raised on an unprecedented era of success and a brilliant generation of batting talents. So naturally, when your team are effectively none for two on a slow pitch, the situation demands only one approach: the Pant doctrine.

What it gets, instead, is Pujara, and an innings that almost from its very first stirrings begins to take on an epic, orchestral, heroic quality. Wood has first crack, dishing out some hostile rib music. Jimmy Anderson comes on and wobbles wicked inswingers into his pads with a short leg. Sam Curran bends the ball in from around the wicket. Five balls becomes 10, and then 15 and 20. Pujara has still not scored a run.

England scent weakness. Jonny Bairstow installs himself at silly mid-on and leads the chirping. The crowd begins to stir a little. An inside edge to square leg brings an aborted single. Then a square drive, cut off by a scrambling Haseeb Hameed. Finally, at 12.34pm, to rapturous cheers, Pujara pushes Curran to midwicket and gratefully jogs what has become the longest 22 yards of his life.

Slow starts are nothing new to Pujara. This wasn’t even his longest drought: at Johannesburg a few years back, he faced 53 balls before scoring his first run. But then denial has always been second nature to him. As a young batsman, his obsessively detailed father, Arvind, prevented him from playing gully cricket because he reckoned facing a tennis ball would get him into bad habits. He had to stay indoors during festivals in case he got injured by firecrackers or dandiya sticks. In a way, his entire existence has been built around self‑denial: from days off, from external displays of emotion, from rubbing his bruises or fiddling outside off-stump, from a culture that demands ever greater aggression, ever greater expression, an ever more perfectly realised Pant-ness.

Now, on India’s independence day, Pujara was embodying the Gandhian doctrine of nonviolent resistance. That first run was really just the phoney war: the real battle would come over the following hours, as Pujara and Ajinkya Rahane slowly carved out a lead. His first four came off his 118th ball. His first real shot in anger came off his 205th, a startling pull behind square. And then it was all over: a horrible lifter from Wood that Pujara could only glove to slip. As Lord’s finally rose in reluctant appreciation, Pujara looked distraught, wishing he had let the ball thud him in the chest instead.

Often people describe innings like Pujara’s as “proper Test batting”, which always feels like a curiously uncharitable sentiment. Garfield Sobers was a proper Test batsman. So was AB de Villiers. The point, surely, is that Test cricket has room for them all: lightning blitzes, spectacular blowouts and long boring afternoons at less than two an over.

It’s all Test cricket, or none of it is. And perhaps the real lesson here is that ultimately you just have to play the hand you’ve been dealt: by conditions, by the situation, by the unique cocktail of talents fate has handed you. Pujara made 45 off 206 balls, and the best part is that we still don’t know whether he’s a match‑winning hero or a game‑killing villain. Like the very best things in life, we’ll just have to wait a little longer.