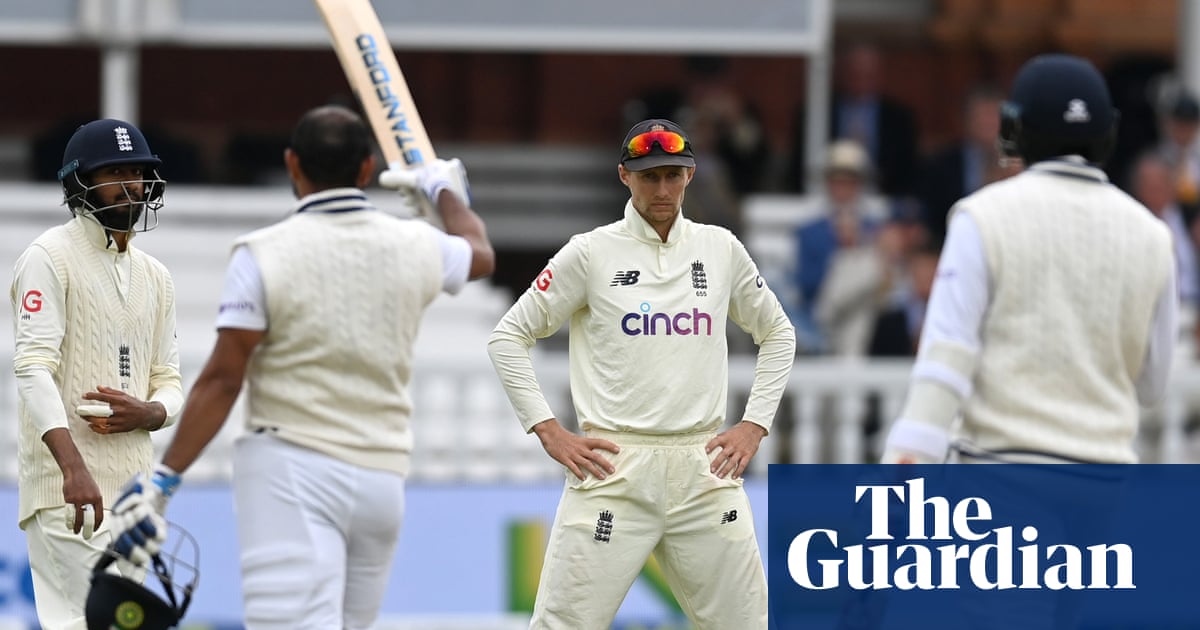 Joe Root admitted he was probably tactically naive as England let slip a golden chance to take a lead in the Test series against India and instead fell to a demoralising defeat on a gripping final day at Lord’s.

India gained the upper hand in the morning from the unlikeliest of sources as career-best scores from the tailenders Mohammed Shami (56 not out) and Jasprit Bumrah (34 not out) unexpectedly left the tourists in command, with Root blaming a stunning defeat squarely on the team’s failure to restrict India’s second innings total, admitting: “I think a lot falls on my shoulders as captain.”

Shami and Bumrah’s expansive partnership of 89 had been pivotal in India’s eventual 151-run victory, said Root. “Tactically I don’t think I dealt with that well enough as captain, and off the back of it it put us in a difficult position,” adding he thought, even an hour into the day, that England were in command of the situation. “It’s just disappointing we didn’t manage to close out that innings how we could have.”

If anyone had deserved a different result to this Test match, it was surely Root. His heroic 180 not out had not merely rescued England’s first innings, it had put them in front in the game. After another batting collapse to 120 all out left England 1-0 down in the Test series, despite all his best efforts, it would have been understandable if he had let a sigh escape him, or at least a roll of the eyes. They did not, of course: that is not the Root way.

The England captain is a man who has never once handed off responsibility when he could bear it for others.

But all Root’s generosity could not deny that his team’s painful inability to bat out two sessions, to salvage even a draw from a game they would have hoped to win, has left him in a situation with which he has become increasingly familiar.

“I don’t think there’s any hiding from it we do need to get better,” he said. “We need to score heavier, but the guys all know that, they’re working extremely hard and there’s a lot cricket still to be played. A lot can happen within three games, we’ve found ourselves in positions like this before within series.

“And when you talk about batting, it’s a collective. There have been plenty of occasions in my career when others have carried me through games. We’ve just got to keep being better at building those big partnerships.”

There was diplomacy, too, for his opposite number, Virat Kohli. The aggressiveness shown between the two sides here at Lord’s has been a contrast to the more matey relations they enjoyed at Trent Bridge, where Root and Kohli could be seen leaving the field of play talking and joking with each other. The edge here has been palpable, especially in the wake of the heated words exchanged by Jimmy Anderson with Bumrah and Kohli himself.

“Fair play to Virat and his team, they’ve jumped on something emotional that’s given them an edge and something to cling on to tactically,” said Root, adding he preferred not to get “stuck into the sideshow”. But he insisted there was no “nastiness” in it: “Virat’s got his style and his way of doing things that’s probably contrasting naturally to the way I play my cricket.”

For both sides, there is now nine day’s grace before the next Test begins at Headingley, and Root will be hoping that his players can use it to shake off the disappointment of this result, and locate their batting form. But while he emphasised the need for calm, Root’s assertion that “it’s not time to panic” will bring an uneasy shiver to some. He said exactly the same thing after England’s series defeat to New Zealand in June.