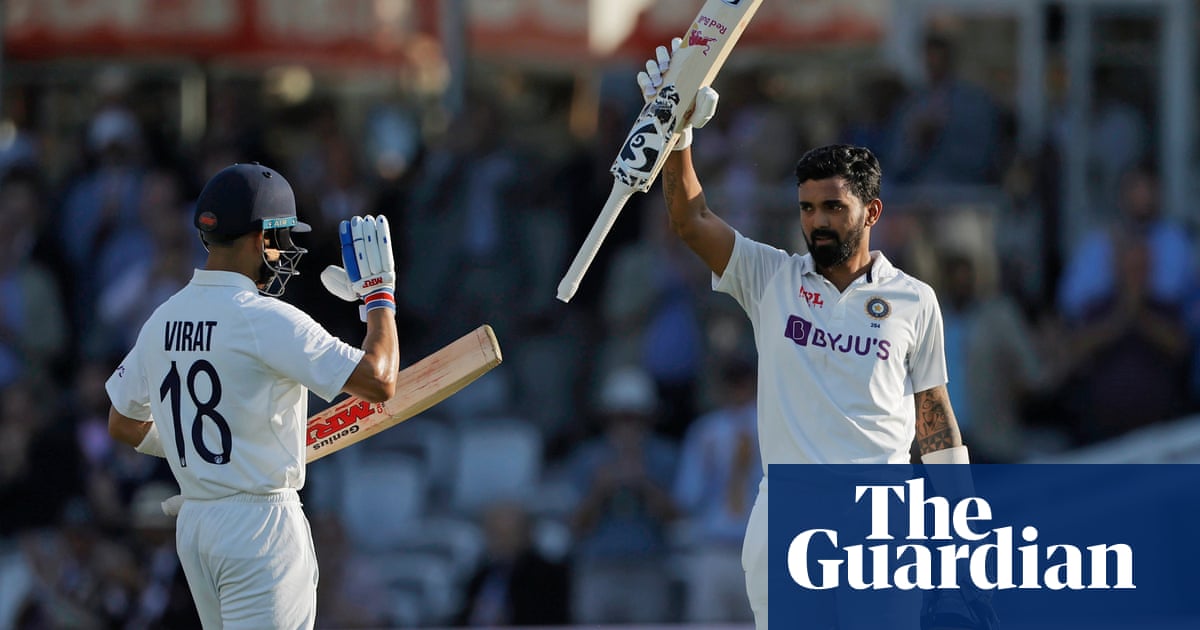 When England left Trent Bridge last Sunday they could at least draw comfort from the great unknown of a washed-out final day. A heavy dose of reality followed at Lord’s, however, with India dominating the opening exchanges of this second Test thanks to a sublime unbeaten century from KL Rahul.

As the two sides walked off the field at 7.21pm, the tourists had progressed to 276 for three from 90 overs and Rahul was 127 not out from 248 balls. Ollie Robinson struck late on to remove Virat Kohli for 42, while Jimmy Anderson had shaken off his fitness doubts and picked up two wickets, but this was not the scenario envisaged when Joe Root won the toss under leaden skies and elected to bowl.

Instead the England captain cut a frustrated figure, forced to watch as India’s batsmen put on a masterclass. Rohit Sharma delivered a bristling 145-ball 83 that went some way to addressing the imbalance of a career that is feast at home and famine away, while Rahul was a veritable rock for his team.

Rahul wasn’t even down to start this series and has instead taken his chance through injuries to Shubman Gill and Mayank Agarwal. It may be that India have stumbled across the ideal foil for Sharma in the long-term, however, this diligent right-hander etching his name on to the honours board that curiously eluded both Sachin Tendulkar and Sunil Gavaskar through an innings of serene class.

It was no mean feat considering the start of the day, when Kohli lost the toss for the eighth time in eight Tests on English soil. Indeed it was hard not to be reminded of the corresponding fixture three years ago, when the tourists were inserted in similarly soupy conditions and promptly crumbled to 107 all out.

Stuart Broad may have been ruled out of the series with a torn calf muscle but Anderson passed a late fitness test amid concerns over a tight thigh. And with a dark Dukes ball plucked from the box, and England having asked the groundsman, Karl McDermott, for a tinge of green on the pitch, conditions felt ripe for a repeat.

However, this India side has arrived with huge sense purpose, while their hosts appear to be creaking; as well as Mark Wood stepping up for Broad, two further changes – Moeen Ali replacing Dan Lawrence for balance, and Haseeb Hameed returning to put Zak Crawley out of his misery – underlined the sense of English uncertainty this summer.

And over the course of three sessions – delayed initially by rain and featuring a lunch that was needlessly extended to an hour due to a mere sprinkle – Kohli’s men flexed their collective muscle. The first sell-out Test crowd at Lord’s since 2019 meant the return of the traditional hum, chiefly breaking to offer appreciative applause.

The foundations were laid by Rahul and Sharma bettering the 97 they stuck on the board at Trent Bridge and crafting the highest opening stand by a side asked to bat first at the Home of Cricket. Andrew Strauss and Alastair Cook held the record previously, 114 versus South Africa in 2008, but these two right-handers went 12 runs higher.

While both were resolute in defence – stillness personified and so correct by way of technique – this was also a modern retelling of the Tortoise and the Hare. Rahul was happy to dig in, striking his first boundary off the 108th ball he faced when launching Moeen for six down the ground, while Sharma typically punished anything loose.

The bat was beaten occasionally and the odd inside edge drew oohs from the spectators, but over the course of their 44-over alliance neither opener offered a genuine chance. Anderson probed, Robinson did too, yet the support pairing of Sam Curran and Wood struggled to sustain much pressure despite the latter’s impressive speeds.

Indeed Sharma took a particular liking to Curran, picking off four boundaries in one over during his first spell before lunch, while he was clearly unfazed by Wood hitting 95.7mph on the speed gun judging by the first six of the day being pulled over long leg like he was swatting away a pesky fly. Moeen had nothing to work with but was tidy.

There was no lack of perspiration on a slow surface but it wasn’t until Anderson returned during the second half of the second session that Root got the breakthrough he so desperately craved. Sharma fell 18 runs short of his first century outside India when England’s attack leader finally found a way past his thick bat.

This was classic Anderson, beating the outside edge with swing before the follow-up, a wobble-seam delivery, nipped back down the slope and clipped off-stump. When the uncertain Cheteshwar Pujara came and went for nine, offering catching practice to Jonny Bairstow at third slip when Anderson found the edge, suddenly Lord’s was alive.

Kohli had arrived at the crease yet to get off the mark in the series after his first-baller against Anderson in Nottingham. But though Robinson beat his outside edge a couple of times, Rahul managed to soak up the pressure at Anderson’s end, moving to his second half-century of the tour and steering India to tea on 152 for two.

After this brief flurry the evening session began with a return to the running theme of the day, albeit with the clouds having made way for sunshine. Rahul serenely progressed to his sixth Test century from 212 balls and, after that scratchy start, Kohli finally enjoyed some time in the middle.

Robinson at least ensured the day ended on a high note for England when he removed the Indian captain, that fourth stump line once again his undoing and Root safely holding on at first slip. But with Rahul set to resume on the second morning and batting with impressive poise, there remains plenty of work still to do.