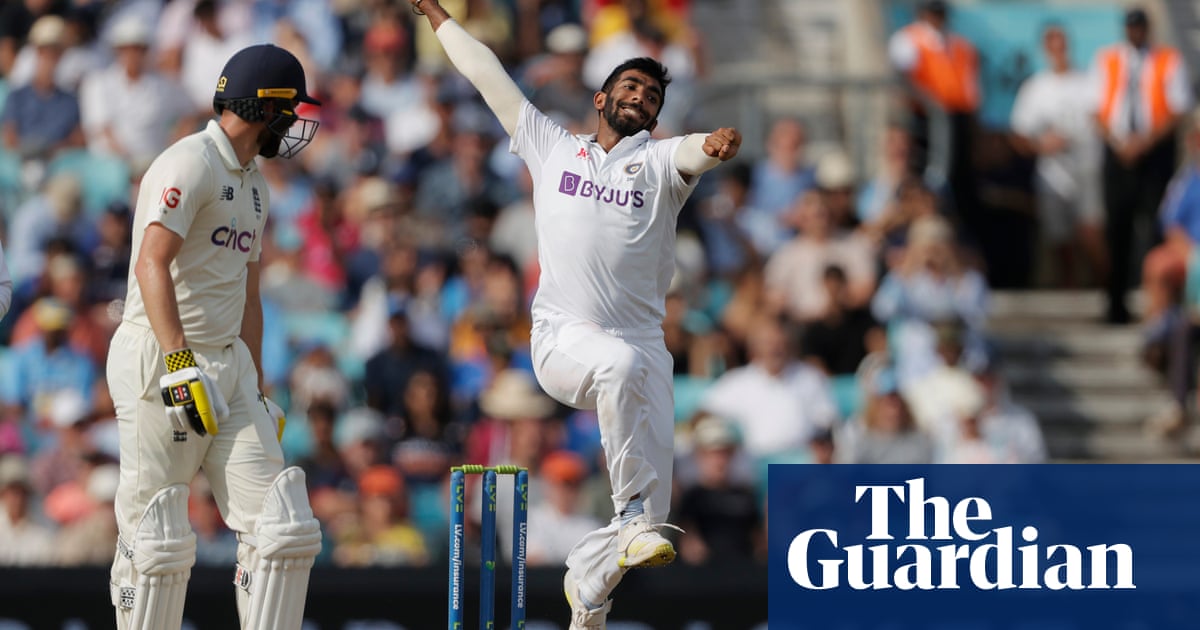 The signs were there, if you wanted to see them. England’s batsmen emerged for the start of day five full of vigour and hope, buoyed by their unbeaten start the previous evening and a crowd that believed, against the weight of history and perhaps its own better sense. The first run was greeted like a divine blessing. The first boundary from Rory Burns was roared every inch of its way to the rope.

Meanwhile, at the other end, Jasprit Bumrah was quietly completing a spell of four overs for three runs. It was a day on which cricket’s master of disguise would take on at least half a dozen different guises: talisman, calm head, tail-end intimidator, new-ball craftsman, reverse-swing guru, yorker-summoning necromancer. All that, though, was still to come. And here, with the target still distant and the required rate rising, Bumrah was slowly, incrementally whittling down England’s chances of victory.

In a way, Bumrah set up the day as he would later set up England’s batsmen: starving, stifling, strangling, sadistically eliminating all other possibilities until only one remained. As much as Shardul Thakur with his golden arm or Ravindra Jadeja with his perseverance or Umesh Yadav with his late plunder, it was Bumrah who mapped out this Indian triumph from start to finish. And at the bejewelled heart of this performance was the electrifying afternoon spell – on a par with any produced by an Indian bowler in foreign conditions – that broke this game in half.

It began immediately after lunch, and again the signs were there if you were looking closely enough. While Jadeja gave India the initial boost with the wicket of Haseeb Hameed, Bumrah was quietly probing, giving it plenty of air, exploring the limits of this 60-over-old ball and what it might be capable of. Towards the end of his first over he got it reversing for the first time.

Likewise, under normal circumstances Ollie Pope shouldn’t really be getting bowled by a straight half-volley. And yet there was a kind of sorcery to the one that got him: a ball propelled not just with 89mph pace and a hint of tail but with some indefinable extra ingredient: extra heat, extra noise, extra will. The next over, Bumrah removed Jonny Bairstow in a mess of bat and limbs and stumps – fuller still, quicker still, delivered with a cruel and knowing relish, a joke that provided not just its own punchline but its own laugh. Here you are. See if you can play that. Only kidding.

The signs were there, if you were looking closely enough. The previous evening Moeen Ali had been asked on Sky Sports about the threat of Jadeja on the final day. Of course Moeen gave the question due deference, but as he pointed out the biggest threat here wasn’t the left-arm spinner with an average of 46 in England. It was Bumrah, the man who can multiply zero to one, the reason that no team – not even one that had its opponents 127 for seven on the first afternoon – can ever feel truly safe.

There is a wider sense of triumph here, of course, and it is one that goes beyond this Indian victory over an average Test team missing four of its best bowlers. Bumrah is 27 but in international terms he is still an emerging force, an improving talent. Craig Overton has been a Test cricketer for longer than he has. Sam Curran has played the same number of Tests. For all Bumrah’s achievements in India white, in Mumbai and India blue, this is a story whose crux is yet to be written.

And of course there are choices to be made. The all-conquering all-format player is becoming an increasingly endangered species. Joe Root can’t do it. Ben Stokes can’t do it. Rashid Khan and Mitchell Starc can’t do it. Perhaps there will come a point when Bumrah, too, has to bend to the inevitabilities of the schedule and the market and his own wearying body, when the potential strands of his career slowly winnow away until only one remains.

But for now, all possibilities remain stirringly on the table. Just as there was no inevitability to Bumrah’s rise as a world-class bowler, it was never inevitable that this thrilling short-form talent would be able or willing to master the many arts of the longest game. And so perhaps this is a moment to set aside English disappointment and English sorrow: a moment instead to cherish, to savour, even to give quiet thanks.