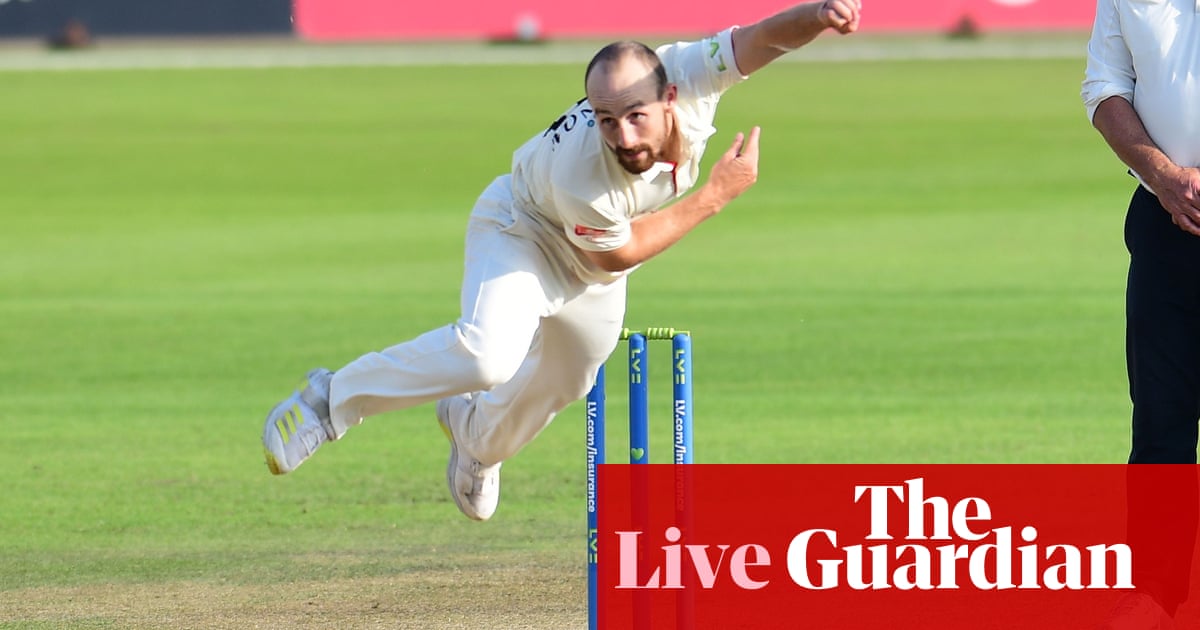 Derby: Derbyshire 41-3 v Leicestershire 528 all out

Yorkshire demolished Somerset in under two days at Scarborough, an innings and 33-run victory guided by a superb century from Harry Brook, capped at the start of the match, and a career-best nine wickets for Matthew Fisher.

In a clash between two teams without a bean in the title soup, Middlesex had a day to remember at Hove, as Mark Stoneman and Sam Robson put on 376 – a club record opening partnership, beating Mike Gatting and Justin Langer’s 372. With new ball in hand Sussex finally had Stoneman caught behind for 174, his first hundred since moving to Lord’s. Robson remains, on 192, the pitch friendly and the forecast good.

The Division One clash at Edgbaston swerved one way, then the other, as Hampshire batted through the second day, finishing with a useful lead. Keith Barker, five-wicket destroyer in the first innings, was top scorer against his old county team. James Vince made a typically skittish 48, before holing out to long leg. Liam Norwell grabbed 4-64. In the other top of the table clash, Nottinghamshire hold the upper hand after bowling Lancashire out for 168, Saqib Mahmood batting with a runner after injuring his side on Sunday.

Despite 50 from James Bracey, Gloucestershire are in a sticky position against Essex. Paul Walter, 96, and an autumnal jig of an innings from Simon Harmer built a first-innings lead. Harmer then grabbed two wickets, a catch and watched with interest as Ollie Price was run out off the last ball of the day.

Rikki Clarke, in the final month of his final season, hushed the passing years as he took his 800th career wicket against Northants, helping to put Surrey in a healthy position.

Leicestershire scrubbed up nicely to reach 528 thanks to a hundred from Lewis Hill and a career-best 87 from Chris Wright. Derbyshire slipped to 41-3 at stumps. At the Riverside, Durham played with uncharacteristic panache, revving up a 406-run first innings lead, before browbeaten Glamorgan lost two wickets.

An innings defeat looks on the cards for Worcestershire, who sloshed along to 91-6 in their second innings, undone by Kent’s Grant Stewart, Nathan Gilchrist and, yes, Darren Stevens.

It’s day three and Yorkshire have already spanked Somerset by an innings and 33 runs. But a bright sun has burst through for one last hurrah and a butterfly lands on the late blooming buddleia.

Here, with thanks to Lancashire’s Ken Grime, is the Division One championship table as it stands this morning:

It’s going to be a thriller…