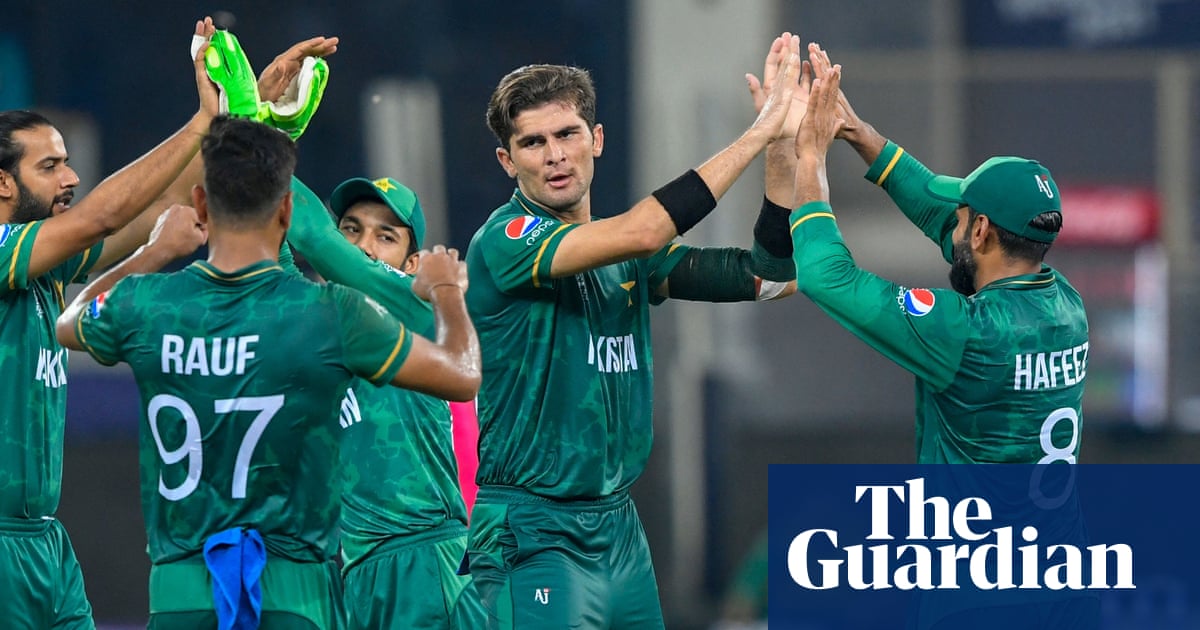 It has been 29 years in the making, but when Pakistan finally broke the World Cup shackles that India had placed them firmly in, they did so in the most emphatic fashion possible. The game lasted 37.5 overs but in reality the contest was decided in 19 balls.

Shaheen Shah Afridi had his plans in place, skills sharpened and steamed in to let loose not so much cricket balls but precision-guided missiles that produced shock and awe.

The fourth ball of the innings, the first that Rohit Sharma faced, swung in at pace, moving late and the batsman was fatally in front of the stumps when the back pad was nailed.

There really was little Rohit could do about the ball. But the story was a little different to KL Rahul, who shaped to work a similarly conceived delivery to the on side off the first ball of the third over and feathered the ball on to pad and stumps.

At six for two, India were looking down the barrel and fortunately for them Virat Kohli was not in the mood to give up. Batting outside his crease and nullifying the swing, Kohli signalled his intent by muscling Afridi into the stands over long-on.

Having lost his most reliable partners, Kohli changed gears, committing himself to playing traditional cricket shots, pushing back just enough to keep India in the hunt.

Adding 53 with Rishabh Pant, Kohli ensured that hope floated for India, and when he was finally dismissed, the sixth wicket of the innings, he had done enough to get India to 151 for 7.

While that was certainly a few runs short, given the occasion, the stage and the quality of Pakistan’s bowling on the day, it was the best India could do, and at least gave their bowlers a fighting chance.

In boxing parlance, though, India’s bowlers simply could not land a single punch when it was their turn.

If Afridi was the pointed end of the spear, Babar Azam was the shield. Oozing class from the first ball he placed, Azam set the tone with a back-foot punch through cover that should be immortalised in bronze.

Azam’s footwork was textbook, his timing immaculate and his placement cruelly efficient. There was nothing India’s bowlers could produce that troubled him as he cruised to an unbeaten 68.

While Azam was the man controlling the tempo of the chase, his partner, Mohammad Rizwan, was the perfect foil. Rizwan took just enough chances to put the bowlers off their game, and crucially had perfect understanding with his captain. The pair barely had to call – not that they would have been able to hear each other in a heaving stadium – when they were turning ones into twos.

A look from Azam would be enough for Rizwan to commit to the run, and when he decided to be cheeky, the ball screamed off the middle of the bat. Rizwan ended on a 55-ball 78, sealing Pakistan’s pitch perfect 10-wicket win.

“We did not get any chances. They were very professional. We tried our best, we tried to put pressure on them, but there is no shame in accepting that we were outplayed, outclassed,” said Kohli. “They did not let us come into the game at any stage. Pakistan deserve credit for finishing the game off in the manner they did.”

Azam was understandably proud that Pakistan had finally beaten India in a World Cup match. “This is just the start, we have confidence to build on now,” he said. “It will remain match by match for us. The pressure on us wasn’t that much – we weren’t thinking of the record against India at all.”