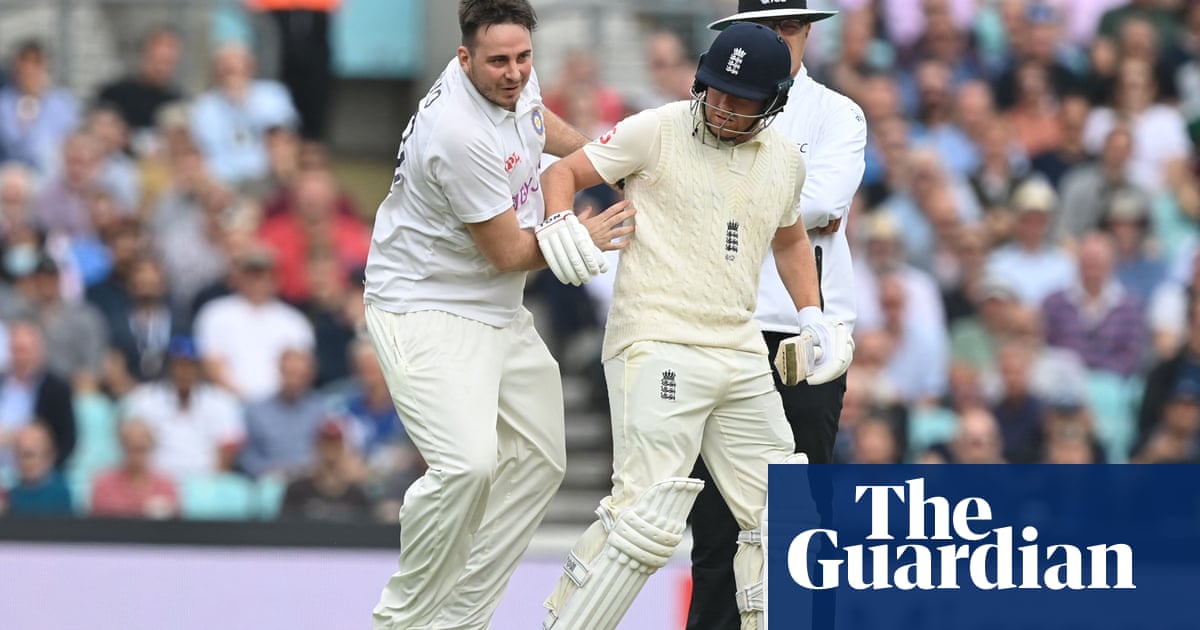 A serial pitch invader has been arrested on suspicion of assault after running on to the pitch during England’s Test match against India at the Oval and steamrolling into Jonny Bairstow on his way to the middle, where he managed to bowl a ball before being hauled away by stewards.

It is the third time this series that the same man has made it on to the field, after previous interventions at Lord’s and Headingley, but he is liable to find future exploits more difficult even after he is released from the south London police station to which he was taken on Friday morning.

“Any pitch invasion is completely unacceptable,” the England and Wales Cricket Board said in a statement. “The ECB and our host venues do not tolerate any such behaviour which risks the safety of players, officials and staff. The ECB works closely with all our venues to share information and enhance their security operation.”

After a delay of several minutes while the invader was removed, Bairstow sent the next ball he faced to the boundary for four, and his partner at the time, Ollie Pope, said he was not significantly affected by the interruption. “I don’t know how he got on the pitch again to be honest,” he said. “I try to stay in my little bubble, don’t let it affect me and just block it out. The art of batting is switching on and off. I try to switch off a little bit between balls, but whatever happens I try to get in a good place for the next ball and be as present as I can.”

Pope’s 81, and his partnerships of 89 with Bairstow and 71 with Moeen Ali, were instrumental in England reaching 290 and a first-innings lead of 99, but India survived a potentially difficult final hour to reach 43 without loss at stumps. “I think the pace of the game will probably change a little bit now,” Pope said. “As we saw in the evening it’s a good pitch now. The outfield’s quickened up as well so I think we might have to toil a bit longer for our wickets, but if we can hang in the right area as long as we can hopefully we’ll get our rewards.”

It was the first time Pope has batted for his country at the Oval, where he has enjoyed great success with Surrey. “It was a special occasion for me,” he said. “I really enjoyed being back out there and trusting my game and trusting my defence and spending a good amount of time at the crease. I would have loved to get that 100. It would have been a bit of a dream to get over the line but I guess if someone said you’d get 80 first game back you’d take that.”