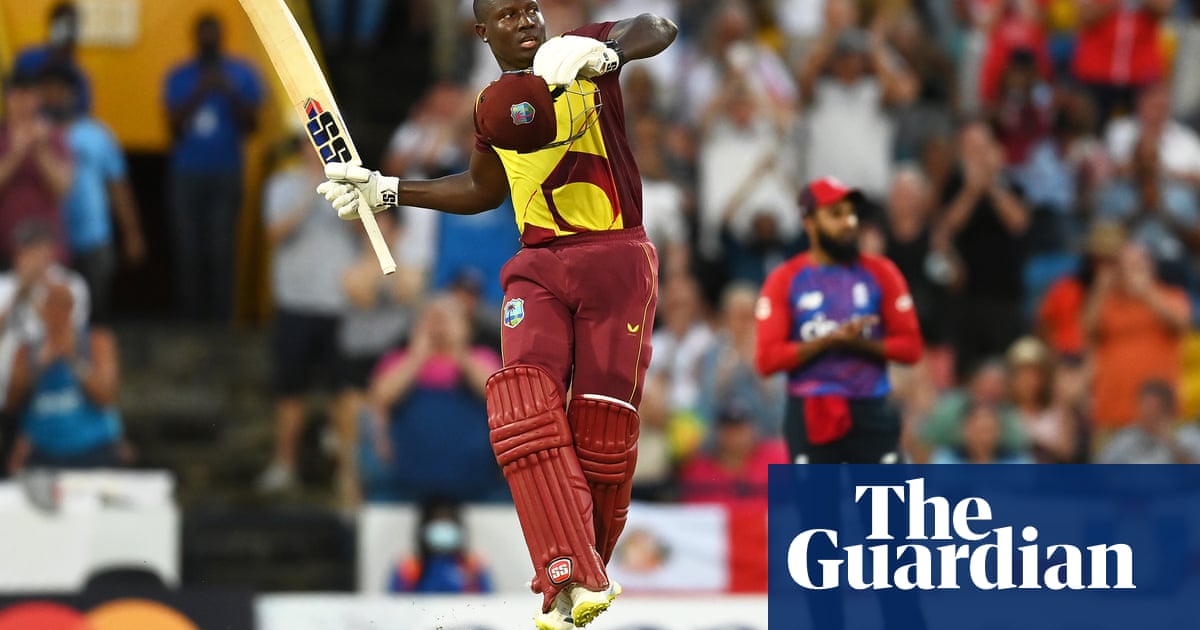 A match that offered fabulous entertainment, four marvellous individual innings, 31 sixes and several rewritten records ended with England posting the highest ever second-innings total at Kensington Oval but still losing by 20 runs to a West Indies side propelled to an unreachable total of 224-5 by Rovman Powell and Nicholas Pooran.

Tom Banton’s excellent 39-ball 73 kept England approximately on track to chase down their target, but unlike Pooran a little earlier he did not find a teammate to join him at the crease and help shoulder the burden. Neither Jason Roy nor James Vince could make it out of the teens, Moeen Ali posted his second duck of the series, and Liam Livingstone, playing only after convincing coaches on Tuesday that he had fully recovered from oesophagitis, was clearly unfit, and needed a physio to bring him some medication before he had even faced a ball. By his fifth, he was out.

When Banton himself fell in the following over, picking out Jason Holder at long-on when trying to hit Kieron Pollard for successive sixes, England’s chances seem to dip as precipitously as had the ball. But Phil Salt, one of three England debutants, was superb in scoring 57 off 24 balls before he went in the final over, having kept England’s score soaring at enough of a pace for success to remain a plausible possibility until very nearly the end.

After winning the toss as choosing, as they do, to bat second England hit upon a novel way, though perhaps not the most effective, to reduce attention on their leaky death bowling: to leak runs consistently throughout the innings. As a result, and thanks to some marvellous batting from Pooran and Powell – who both posted the highest T20 score of their careers – West Indies were able to set a new all-time record third-wicket partnership, more than 200 runs were scored for the first time in an international T20 at Kensington Oval, and the umpires must have very nearly run out of the antiseptic wipes they use to cleanse the ball of potential viral scraps every time it is returned from the stands. Including leg byes (one) and wides (one) 30 boundaries were registered in the hosts’ innings; only five overs were entirely boundary-free and 13 contained at least one six.

It was a near-constant aerial barrage, Pooran scoring 70 off 43 and Powell 107 off 53 before both lifted catches to Liam Livingstone in the deep in the closing stages. This was hitting that was great in every sense, the overwhelming majority of West Indies’ 16 sixes not just clearing the rope but mortally endangering anyone sitting in Kensington Oval’s upper tiers who was not, for some reason, paying rapt attention.

Powell was the one new face in West Indies’ side, replacing Odean Smith to incredible effect. Meanwhile England’s changes included three debuts: Harry Brook and George Garton joining Salt in making their first starts, Moeen deputised as captain after Eoin Morgan felt a muscle strain
in the warm-up and Tom Banton took the gloves
as Sam Billings returned to his traditional if unwanted drink-carrying role.

The result of all this was England fielding three left-arm seamers, but it was a left-handed batter who first caught the eye, as Pooran took on his fellow southpaws and flourished. After Garton dismissed Brandon King in his first over, Pooran came in and immediately took control, and by the time Shai Hope, West Indies’ other opener, was dismissed Hope had four and Pooran was already on 32.

But by then Pooran’s period as the outstanding batter was over. He continued to play beautifully but was instantly overshadowed by Powell. The 28-year-old slog-swept his second ball of the night for six and barely decelerated from there, his fluency such that Pooran was soon reduced to accepting singles just to get his teammate back on strike.

There was one shot in particular that illustrated Powell’s timing, when he deflected a Reece Topley full toss way over the boundary for six while off balance and barely moving his bat at all. By the midway point of the 11th over both players had faced 27 balls, Pooran scoring 46 and Powell 45, and they continued to go stride for stride from there: Pooran took 34 balls to reach a half-century, Powell 31, and both were eventually caught in the deep by Livingstone, Pooran for a 43-ball 70 and Powell a superb 53-ball 107.

As much as Banton and Salt peppered the stands thereafter, it was a standard England could not match.