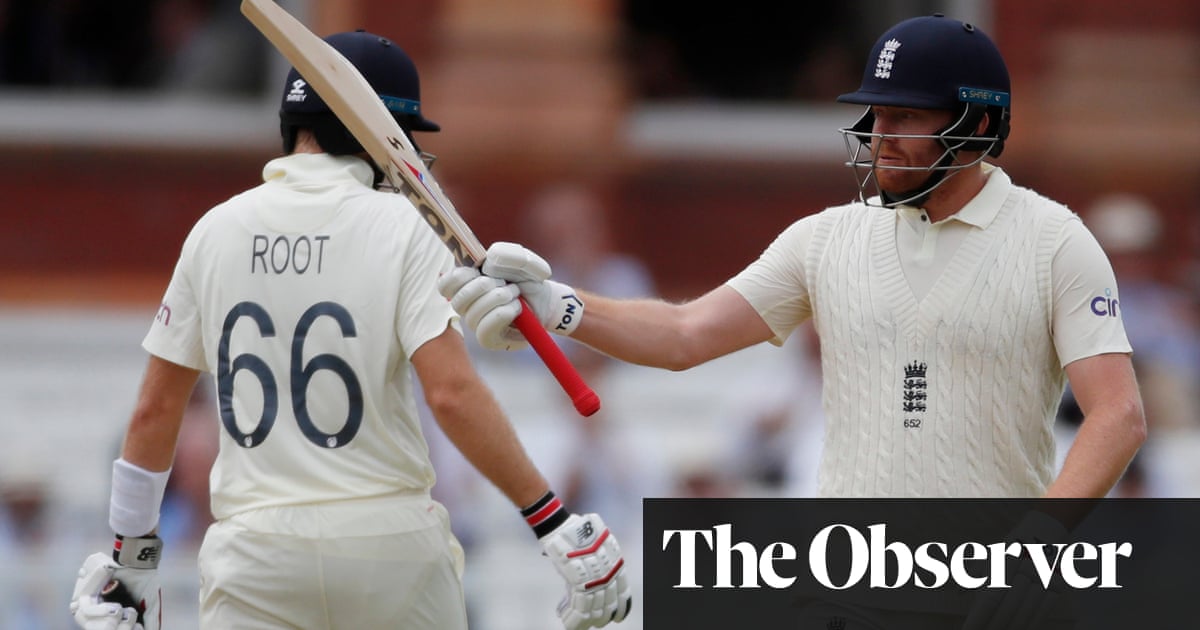 KL Rahul stood in the deep, with champagne corks arced around him like a shower of meteorites. India’s centurion did not look impressed. He had owned this ground on Thursday. But this was Saturday, when the crowd tends to treat the outfield as an extension of its picnic area. Seeing how far one can spray one’s Piper-Heidsieck has become a sport in its own right.

It is the posho equivalent of throwing coins from the stands and ought by rights to earn a swift fine or an Asbo. But the Saturday of the Lord’s Test has its own rituals and its own mythology.

It still clings to the idea that it is a date in The Season, even if there is a marked absence of royalty, and the few folk here who can explain the Henley regatta or “have a team” in the Boat Race are safely contained within the pavilion.

Still, there is a way things are done, a gala style to live up to. The pork pies for the picnic basket are bought specially from M&S; the panama is rescued from the back of the cupboard and checked for nesting creatures.

On Friday the ground had gleamed RedforRuth: a day later it returned to its familiar pastel palette, the summer tones of pinks and blues giving the stands a watercolour wash.

Even the weather seemed to understand its duty: gone were the low clouds of the first two days, dropping their sudden deposits of drizzle like stealth bombs. The sun emerged just as Mohammed Shami bowled his first ball from the Nursery End and grew more generous with every over.

The seven days of this series have been great fun but they had not yet developed the aura of a classic contest. As Joe Root and Jonny Bairstow began the day as they meant to go on – heads down and hustling for busy singles and determined twos – there was a nodding presentiment that this was going to be a golden day’s cricket.

There was an ooh of delight for Root’s first square drive, even though it got no further than the fielder stationed precisely for it. People talk about the hum here but really it is the nuanced range of expression these cultured onlookers are capable of that is truly unique – from the warm bubbling of approval when Root reached his 50 to the appreciative murmur as he squeezed the ball through the barely-there gap between the slip cordon and gully. When Bairstow straight-drove a ball that bounced down the square like a greyhound released from the traps, they groaned with pleasure.

Who could begrudge the faithful their moments of ecstasy? This was a day of cricket that lived up to any measure of fantasy. A stunning captain’s innings, plus a half-century for his devoted retainer. A flurry of late-in-the-day wickets to shake them from their post-picnic slumber. An England team that seemed on its last legs going toe to toe with a touring team as compelling as any India side to visit these shores.

Even when they are not taking wickets – and the morning session was the only time they have not – there is something irresistible about India in the field. Their captivating bowling attack and their team culture, not to mention their shared commitment to male grooming, make them a seriously glamorous outfit.

Virat Kohli’s charisma exerts a gravitational pull that earns him a spot alongside Keith Miller, Viv Richards and Imran Khan. And Denis Compton, the Brylcreem Boy, would raise an approving salute to Mohammed Siraj, whose most recent Instagram post reveals the secret of his shiny, healthy beard.

Where Kohli was the centre of attention the last time India were here two years ago, Siraj is now stealing the limelight. After their tussle at Trent Bridge the fast bowler resumed his battle with Bairstow, thundering down bouncers that cannoned off the Yorkshireman’s shoulder as if meeting a brick wall, and following through so far that the England batter had to shimmy past him as he ran.

He got his man eventually, and thought he had Root, too, in the evening session. But after two misjudged referrals against the England captain on Friday, Kohli ignored his appeals for DRS, even when Siraj walked all the way to slip to plead with him.

The bowler remained bent over, head in hands, as the rest of the players returned to their fielding positions. As poses go it was theatrical – and just what the crowd wanted. They would have given him full marks for style.