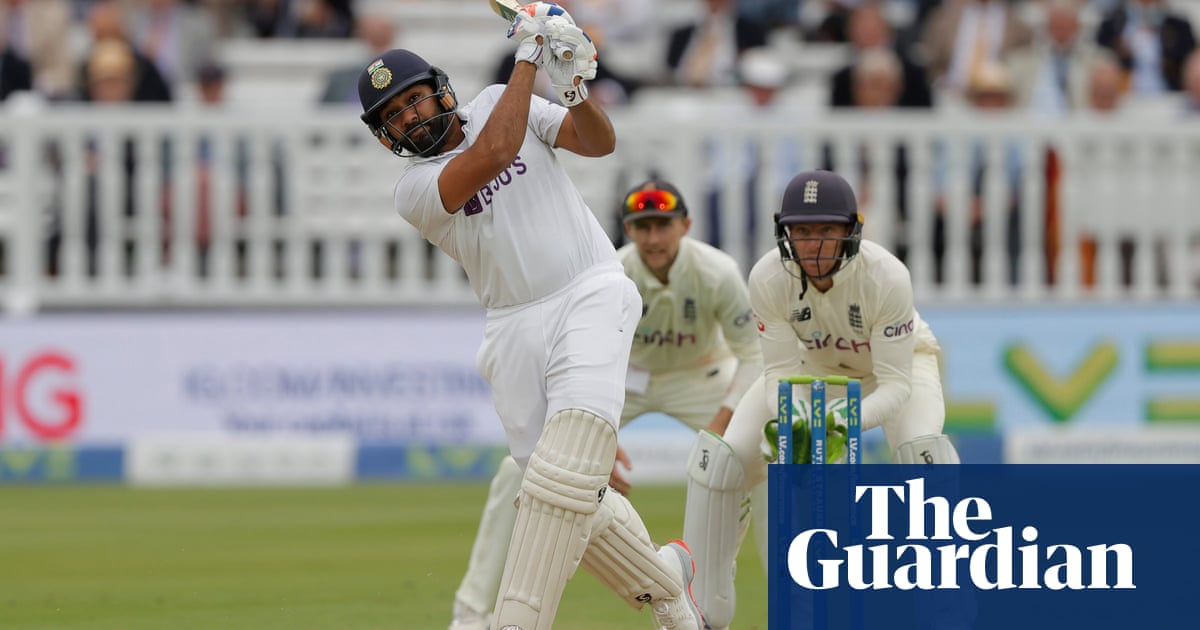 Rohit Sharma arrived in Australia a week before Christmas and immediately went into 14 days of hard quarantine. Marooned in his Sydney apartment while his teammates were playing in Melbourne, once he had completed his daily regimen of exercise there was little to be done except to watch television and think. So that was what he did. As his teammates battled hard against the Australian pace attack of Pat Cummins, Josh Hazlewood and Mitchell Starc, Sharma watched intently, hour upon hour, working out their methods, working out his own.

The Sharma who finally emerged from quarantine was a smarter, more circumspect, more thorough batsman than the one who entered it. Early in his innings he had resolved to get well across his stumps, to get his head more in line with the ball: not necessarily to hit it, but to leave it.

When you are as fabulous a shot-maker as Sharma, a man who has hit 264 in a one-day international, this is by no means a natural instinct. Had he not taken that time – those hours and days hardening and sharpening his mindset to Test batting – it might never have been honed. In the space of eight months, Sharma’s reputation as a gifted white-ball player with serious flaws at Test level has been shed, perhaps for good.

Asked to bat first under cloudy Lord’s skies against one of the greatest fast bowlers of all time, Sharma trusted his method, trusted his judgement, trusted his talent, and was rewarded with an innings of 83: his highest ever Test score outside Asia. After a cautious start against James Anderson and Ollie Robinson, he moved effortlessly into gear by hitting Sam Curran for 26 runs in 12 balls. He was away, and so were India.

At the other end, KL Rahul was playing his own waiting game. Exiled from the Test team for two years and only recalled after a head injury to Mayank Agarwal, Rahul had to do his acclimatisation from the non-striker’s end.

When Sharma brought up India’s 100, Rahul had made just 16. He didn’t hit a boundary until 3.20pm. Three years ago in England he seemed too eager by far, desperate to feel bat on ball, desperate to make a difference. Now 29 years of age, Rahul is a batsman who has learned the value of patience, and was rewarded with an unbeaten century and a place on the Lord’s honours board.

To watch first Sharma and then Rahul slowly bat England into the dirt on day one at Lord’s was to be struck by the extent to which Test cricket is a game of trust. You may well get an unplayable delivery in the first over. You may end up scoring just 14 off the first 12 overs, as India did here. You may well end up pulling a bouncer straight to long leg, as Sharma did at Trent Bridge when well set. But if you have enough security and trust in your method, your plan, your technique, then over time the game will reward you more often than not.

In the decade between 2011 and the start of 2021, no Indian opening pair had survived more than 20 overs in a Test outside Asia. Since the turn of the year they have done it five times in nine matches. There has been a good deal of wayward speculation in recent months over the root of England’s declining Test form, but the performance of India’s openers here, in the most hostile of conditions, should offer ample pause for thought.

Clearly having strong white-ball players in the Test side isn’t the problem: Sharma and Rahul both have Twenty20 centuries to their name and can destroy an attack in minutes. Clearly a lack of domestic red-ball preparation isn’t the problem: Sharma hasn’t played a Ranji Trophy game since 2015. What India have displayed in recent months – and what England have not – is the self-confidence and mental stamina to hone and develop a strategy, and to stick to it when the going gets rough.

That only comes with time: time not just to practise and to acclimatise, but to think. Perhaps it is no coincidence that India arrived in this country more than two months ago, and have largely worked out a method in English conditions. Mentally, Sharma has been hitting red balls since early June. Moeen Ali has been hitting red balls since Tuesday.

India have a stress-tested, four-seamer formula into which not even the great Ravichandran Ashwin can force his way. England not only have no idea who their best attack is, but what they even want from it. One spinner? No spinner? Whose job is it to dry things up with the old ball? Is Mark Wood supposed to be challenging the outside edge or the skull? What is Sam Curran actually trying to do these days?

Curran sums up England’s disorientation best of all. Since his last Test series in Sri Lanka, Curran has played no red-ball games and 27 white-ball games, in three formats. Perhaps this is why he currently looks like a man trying to bowl everything at once. The head tells him to put six balls on a driveable length. The muscle memory, meanwhile, is warning him never to bowl the same ball twice. It’s still far too early to write him off as a Test cricketer. But right now Curran needs the one thing nobody in England can give him: time.