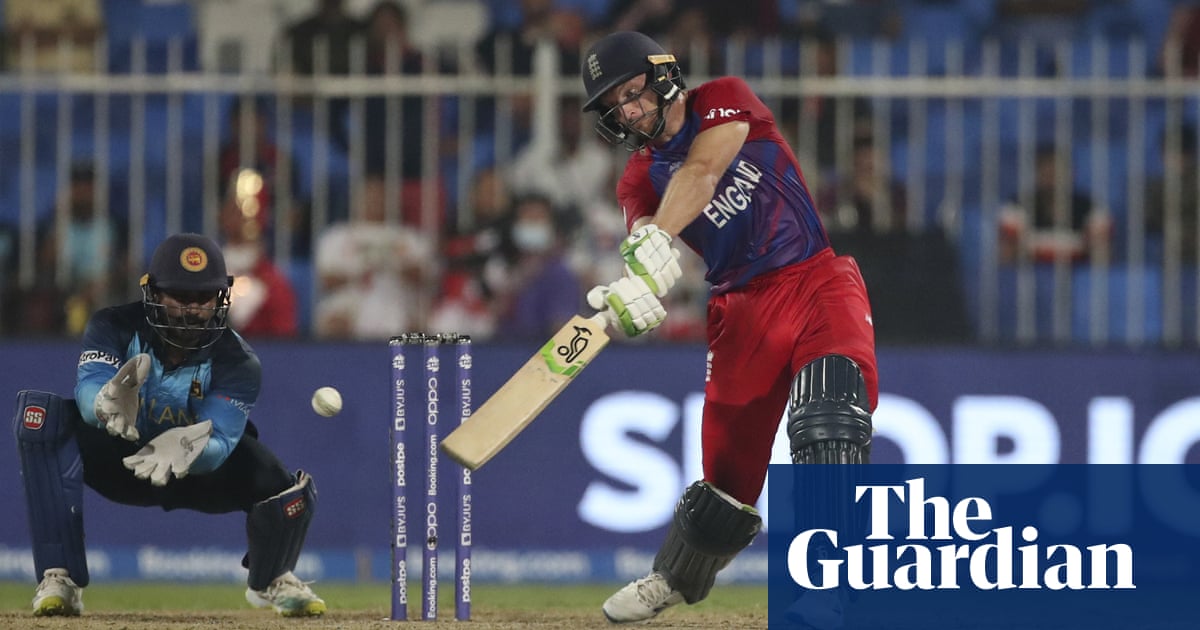 So that answers that one, then. In a tournament where everything had gone England’s way, this time it all went against them: asked to bat first after losing the toss, labouring to work out how to pace their innings, bowling as dew drenched the outfield on a heavy, humid night in Sharjah, and then watching Tymal Mills limp off midway through his second over to shred their death bowling plans.

But they refused to throw in the towel – it was busy soaking dew off the ball – and thanks to the genius of Jos Buttler an often unpleasant evening ended in another victory. Sri Lanka were beaten by 27 runs, and with a 100% record after four games a place in the semi-finals is all but secured.

Buttler led the team off, his teammates walking 10 paces behind and applauding him all the way. Forty-eight hours after his 32-ball 71 powered England to victory over Australia, England’s diamond showed another facet of his brilliance with a 67-ball century transforming an innings that for a while, as so many have in this tournament, got lost in the doldrums.

With the wind in his sails there are few batters to match Buttler, who completed his first international Twenty20 century by lifting the final ball of the innings over square-leg for six. Over the course of 20 overs he was England’s opener, their anchor and their finisher.

How they needed him. The thing about auras of invincibility is that, handsome as they are when they settle upon you, they are not very hardwearing. Just a couple of scratches and off they come. It had taken three wonderfully dominant victories for England to construct the one they sported coming into this fixture, but within 20 minutes it was looking distinctly ragged.

What has set this England team apart as they have clambered from white-ball ignominy to supremacy over the past six years is an unwavering consistency of intent. They go hard and, no matter the circumstances, they keep going hard. No let-up, no respite. Here, though, for an extended period they went soft, the cricketing equivalent of a stale biscuit.

IOn an unfamiliar ground, and on a wicket that was skating-rink flat and sometimes similarly skiddy, for a long time they could not find their footing. It did not help their cause that Sri Lanka, who were on familiar ground having already played three times here at this World Cup, have a gem of their own in Wanindu Hasaranga, who claimed the wickets of Jason Roy, Jonny Bairstow and Eoin Morgan in four excellent overs. He has 34 this calendar year.

But once Buttler started his acceleration Sri Lanka had no answer. His first 50 took 45 balls, his second 22 as he made the short boundaries look positively microscopic. With Morgan, who took 19 balls to reach eight and another 17 to reach 40, he dragged England to 163 for four.

But Sri Lanka, so soundly beaten in England this year, are a rapidly improving side and this remained a compelling contest until the final minutes. It was Hasaranga who was primarily responsible for keeping alive their hopes of chasing down their target.

But if their chances of victory did not quite die when Jason Roy collected the ball at long-off and, aware that he was heading inexorably towards the rope, tossed it to the substitute fielder Sam Billings, they did four balls later, when Dasun Shanaka was brilliantly run out by Buttler, running around from behind the stumps, flinging his right glove off as he went, before hitting the stumps from 15 yards.

Dogs bake ‘borkday’ cupcakes with their human in this adorable