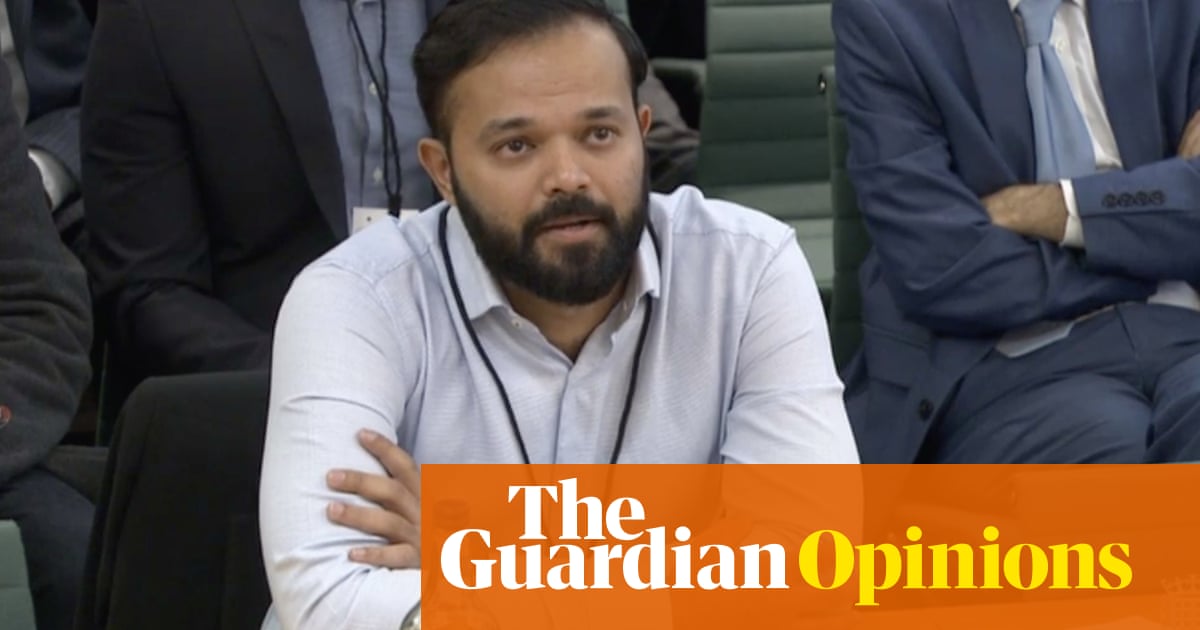 It’s interesting to see people suddenly feel able to dismiss the whole racism-in-cricket horror show, because Yorkshire whistleblower Azeem Rafiq has now himself been found to have sent racist messages. Logically, this feels questionable. Presumably the fact that former England batsman Alex Hales was pictured in blackface in 2009 is further evidence that there is nothing to see here. If, in the coming days, some player is found to have had a passion for monkey chants or white hoods, then I think we could safely say there is absolutely no point discussing the subject of racism in cricket and beyond for one second more. If “they’re all at it”, then we don’t have a problem with “it” at all.

Except, of course, we really do. On Thursday, two days after detailing his horrible and depressing treatment at Yorkshire, it emerged that Rafiq had himself exchanged horrible and depressing antisemitic messages on Facebook 10 years ago. Their discovery has drawn what at least looks like a sincere apology from Rafiq, which I suppose we have to be mildly grateful for in a saga notably short on apologies of any sort at all.

But the scale of the problem is laid bare by the multitudes declaring with satisfaction that Rafiq has now “lost all credibility” – as though people who do racist things cannot themselves be victims of racism. And yet, they can. In fact, the one can occasionally even lead to the other. There are a whole range of reactions to being punched down on, and one of them is to find people to punch down on yourself. Whatever the underpinnings of the 19-year-old Rafiq’s bigotry, we should beware of those who wish to use it to bring the matter conveniently to a close. They are, at the very least, guilty of a failure of imagination.

And what displays of imaginative failure we’re seen this week. Like my colleague Jonathan Liew, I was particularly struck by one of Jonathan Agnew’s comments on Tuesday about Rafiq’s second spell at Yorkshire. “Now, if it had been such a very dreadful experience the first time,” Aggers wondered rhetorically, “why did he go back there?”

Well now. I imagine Agnew knows enough about what’s considered acceptable these days to never ask out loud why a woman might return to a relationship in which she had experienced violence or abuse. Or even to ask why she didn’t leave sooner. But he and many, many others like him still feel this is the type of reasonable insinuation one might make if the subject in question is racism.

Having said that, other isms are very much available in the world of sport and those who cover and commentate on it. When I first began sitting in sporting press boxes, I was fairly blown away by the attitudes I personally encountered. And not in a good way. It often seemed like walking into a time warp, and I spent a long time trying to work out why things felt so backward. I concluded that some men, who were mostly travelling in a pack, and having their hotel rooms tidied after them for good stretches of the year, had clung on to certain “attitudes” – attitudes that were further along to being phased out in more balanced and conventional workplaces. I should say that the majority of sports writers were not like this, and in fact I had many thoughtful and often hilarious conversations about it with some brilliant and kind journalists who became great friends, and who could see all this about some of their colleagues as clear as day. But it did persist, and I often found it extremely boring and exhausting.

Did it make me want to hang around and write more about sport than I did? Not much. Which I suppose is a vaguely telling thing to say about a job that lets you travel round the world to watch the best contests in incredible places on unforgettable occasions. I was lucky enough to have the luxury of other choices, other subjects I already wrote about. Say what you will about the relative pleasures of covering a UK general election over a world cup, but at least in the case of the former I wasn’t repeatedly invited to look up from my laptop and address some graphic deposit of “banter”. Having the patience for all that shit is perhaps a young woman’s game. I am very pleased that there are so many more young women covering sport now, and hope they are required to play this game rather less these days.

I can’t even imagine how much more “tiresome” it is for the vanishingly few writers of colour who do the job. I have, however, heard so many stories, and you can see that a certain type of natural-born-better resents them being there, even if that resentment isn’t consciously realised. But those minimisers are another big part of why it takes so long for the stories of Rafiq and others to surface – and another reminder that whatever it likes to tell itself, sport isn’t the perfect meritocracy, either on or off the pitch.