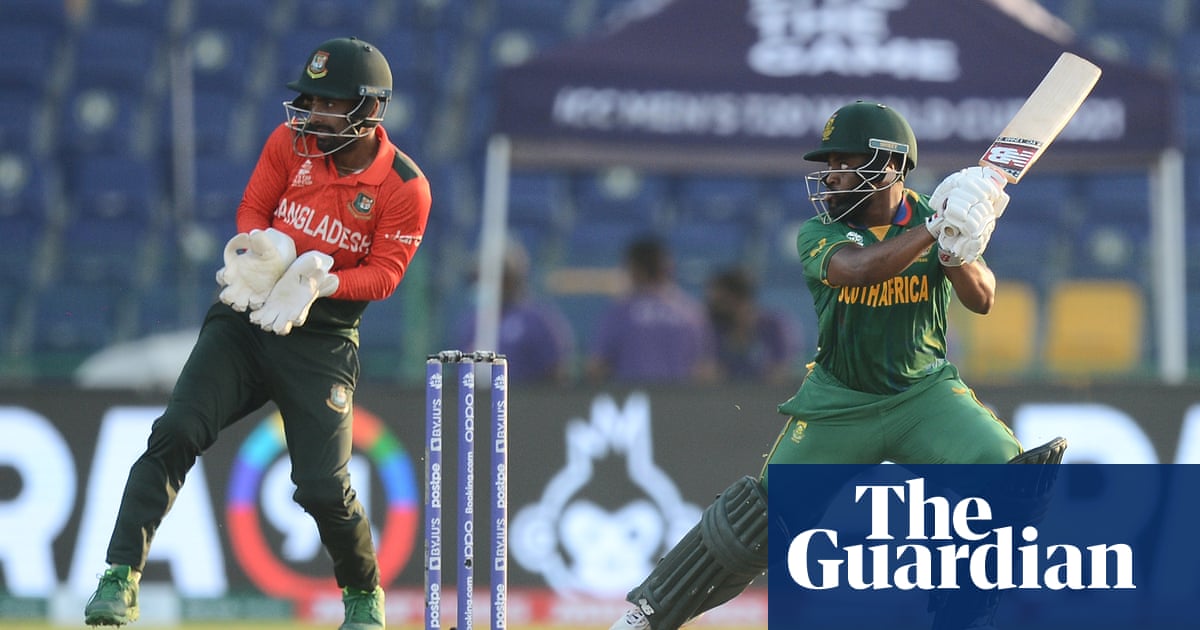 South Africa boosted their hopes of reaching the semi-finals of the T20 World Cup with a six-wicket victory over Bangladesh in their Super 12s match in Abu Dhabi. The Proteas chased down Bangladesh’s below-par total of 84 in 13.3 overs for the loss of four wickets to consolidate second spot behind England in Group 1.

The Tigers – winless and bottom of the group – struggled to get going after being made to bat first, with only Mahedi Hasan (27), Liton Das (24) and Shamim Hossain (11) managing double figures. Kagiso Rabada ran through Bangladesh’s top order, taking three early wickets – including Mohammad Naim and Soumya Sarkar in successive balls at the end of the fourth over – to reduce them to 24 for three with an unusual amount of swing from the white ball.

Wicketkeeper-batter Das put up a fight, but the runs never flowed – he registered just one boundary in 36 deliveries – and he had little support. Off-spinner Mahedi, batting at No 8, prolonged the Bangladesh innings with a positive knock of 27 from 25 balls, including two fours and a six over cover off Tabraiz Shamsi. He was ninth man out – caught and bowled by Anrich Nortje – and Nasum Ahmed fell, hit wicket, to the following ball to bring Bangladesh’s innings to a sorry end within 18.2 overs.

The Tigers’ meagre total was always going to be a difficult task to defend and so it proved, despite making the breakthrough in the first over when Reeza Hendricks was trapped leg before wicket by Taskin Ahmed. Opener Quinton De Kock looked to be in good touch with three early boundaries before being bowled by Mahedi for 16 in the fifth over.

Aiden Markram departed soon after without having troubled the scorers, caught at first slip by Mohammad Naim off the bowling of Taskin. Rassie Van Der Dussen (22) tried to win the game with a six, only to be denied by a stunning diving catch from Shoriful Islam as he sprinted towards the boundary.

But South Africa secured victory in the following over, with captain Temba Bavuma (31 not out) and David Miller (five not out) getting them comfortably over the line.