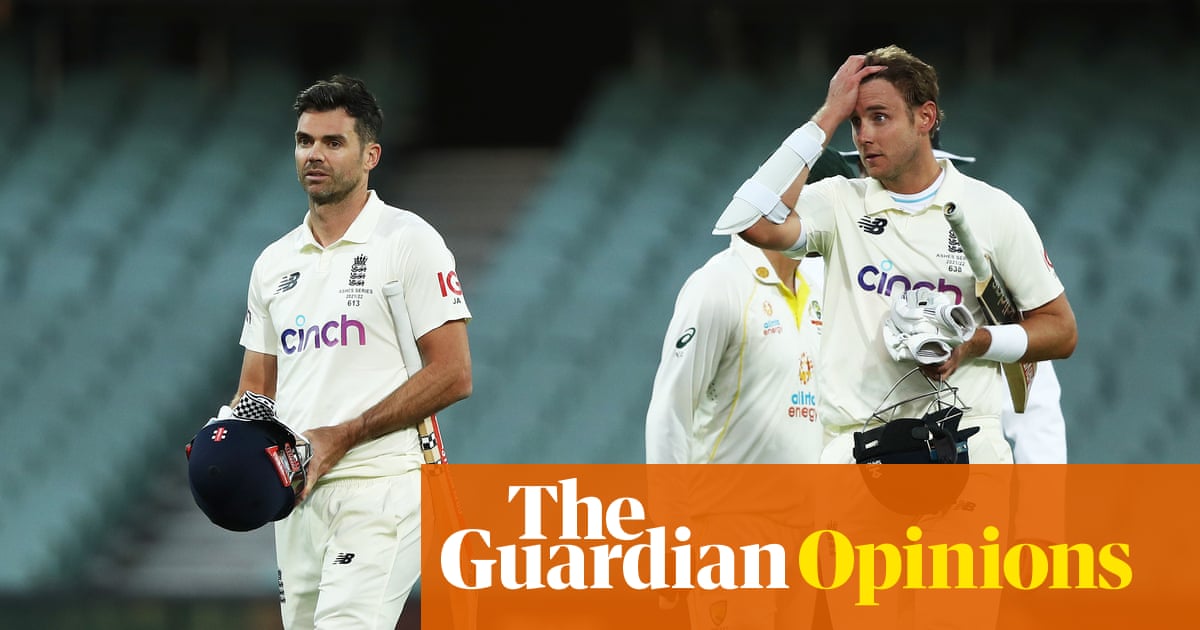 Clang. Bring out your dead. There was something a little ghoulish about the spectacle down the wires from Adelaide as England’s last-wicket pair attempted to push the second Ashes Test into its final knockings on day five.

An Australian Ashes summer always has a strangeness about it seen from 10,000 miles away: those bleached-out greens and blues bounced around the world and beamed out into the depths of a northern winter. Watching James Anderson and Stuart Broad fence and fend at the teeth-and-toes assault of the 6ft 6in, 92mph Mitchell Starc, it was hard to avoid the feeing of something hollow-eyed and ghostly; an emblem of the ill-health of this tour, but also of the wider entropy of English red-ball cricket, a grief that really is going to have to be processed at some point.

Not quite yet though. The undertaker’s cart may be creaking across the cobbles. But the ashes of these Ashes are not quite ready to be scattered. At 2-0 down it is still possible to cling to the prospect of a miraculous defibrillation in Melbourne. Perhaps England’s weirdly mute selector and coach, Chris Silverwood, will see progress here.

Capitulation over five days in Adelaide follows capitulation over four days in Brisbane. Jos Buttler’s valiant defence on the final afternoon at least provided some sense of stiffening, of a rigor ante-mortis. There was a bracing edge of anger in Joe Root’s post-match analysis that will hopefully be turned not just on the lack of commitment in England’s top six, but towards his own captaincy, selection input and on-field leadership.

Either way, England are faced not just with one must-win Test, but three of them in quick succession and two things stand out.

First is the need to distinguish the point at which bad luck and poor resources crash into poor management and poor decision-making. Such were the pre-existing handicaps to this tour – injuries, rustiness, no prep – it is tempting to throw your hands up and say this was always an impossible task.

England have a batting lineup that is, on the numbers, one of the weakest the Test team has fielded, doubly hampered by trying adapt to playing in Australia on the job. What exactly were we expecting?

Such has been the downgrading of the first-class structure, the sense of a grudging addendum to the money machine, that there are no obvious alternatives to the current class of semi-achievers. Scan down the county batting averages from last year and the outstanding performances in a chop and change season are some South Africans, Ollie Pope and a small cast of those who have already been tried.

This is what we have. The legacy product has been allowed to enter a period of managed decline, like a post-industrial city in the Thatcher years. Frankly, chaps, we see economic growth elsewhere. Get on your bike, ambitious young English batsmen, and hope for a franchise gig.

Fatalism, then, is an appealing prospect. And yet, there are still objective standards of competence. Those in leadership roles still have agency. Even on a sinking ship it is possible to arrange the chairs correctly, to organise the final march of the band, to be a good captain and a good coach.

With this in mind the most remarkable part of the slow death of this Ashes series is the extent to which it was never really alive in the first place: the lack of aggression, the basic meekness of a 2-0 deficit that has, from the first ball of the first Test, never looked like going any other way.

Having spent two years planning and overplanning for this series, England’s plans have been comically bad. To walk out at the Gabba with an attack that had never played together was bizarre.

Before Adelaide England seemed guilelessly fixated on the prospect of the pink ball under lights, as they were (disastrously) in Ahmedabad 10 months ago. Again, this just feels like low-quality thinking, a first idea that becomes your only idea.

Ben Stokes bowling endless 82mph bouncers at Marnus Labuschagne, en route to his hundred, was presumably a pre-cooked plan. But why persist with it for so long? Surely something in the gut said the dropping of Mark Wood – the one note of aggression in England’s demise – felt a little wrong?

At the end of which Australia have got to 2-0 with their own weaknesses entirely unexamined. Just turning up, catching the ball and making fewer mistakes has been enough. England have just lost by 275 runs to a team missing its two best bowlers. You wouldn’t have known.

Is there any point in blaming Root for this? He already looks drained. Perhaps his own race will be run by the end of this tour. Is there any point in blaming Silverwood, who has given this his all, but simply seems out of his depth? From the breaking of Jofra Archer, to lost matches, lost series and the development of zero new Test cricketers, this has been seriously thin gruel.

This is the real failing of England’s longest-serving captain and its most all-powerful coach, a failure to stand against the drift, to do anything other than go with the flow, company men to the core.

For now this Ashes series is still alive. It can still be revived. On the other hand this regime has also lost eight and won one of their past Tests. How long do you keep rewarding that?

Hard choices and a sharpening up in every area is required. Even a degree of resistance in Melbourne, some show of aggression, of basic wit would be a start.