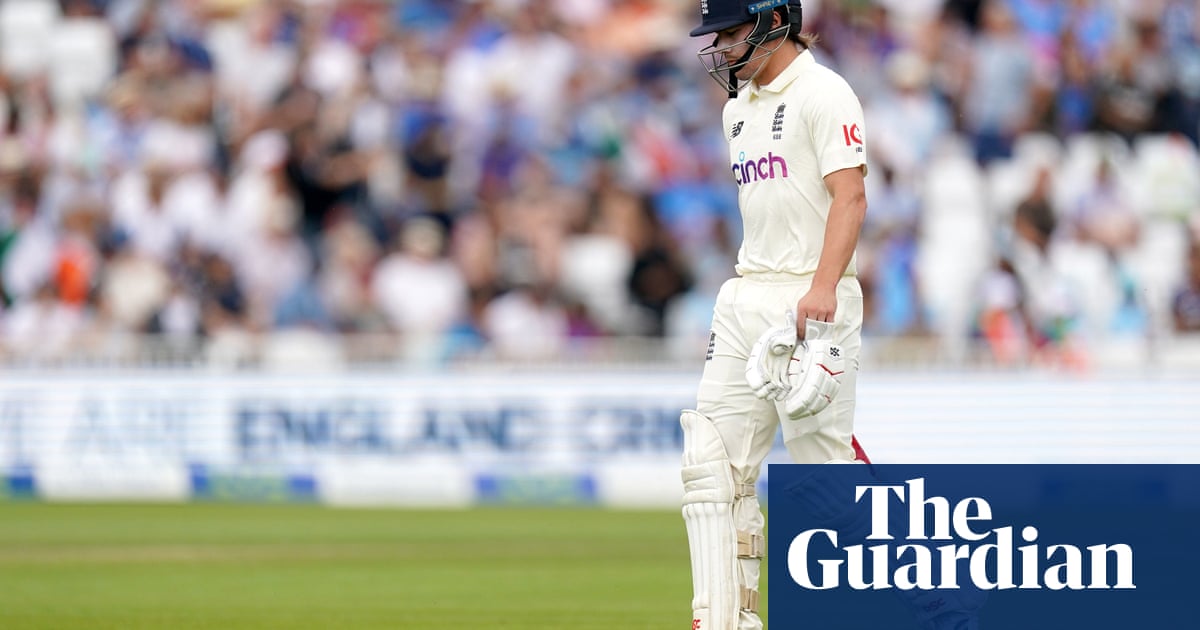 India have taken control of the first Test in Nottingham following a miserable performance from England that saw their batting coach, Marcus Trescothick, admit afterwards that wounds are being licked and the schedule has left them hamstrung.

Joe Root’s side already face an uphill struggle to claw their way back into proceedings. Bowled out for just 183 on the opening day of this five-match series, the seventh time in nine innings they have failed to pass 200 against Virat Kohli’s attack.

The first six of those came on spinning subcontinental pitches during a 3-1 away defeat earlier this year but here it was down to India’s seamers.

Jasprit Bumrah starred with figures of four for 46 while Root was the only Englishman to make a half-century with a defiant 64 in an innings that contained four ducks.

“We’ll go away, lick our wounds and find a way to try and get back in the game,” said Trescothick after stumps. “Today has not been the ideal day, of course, not but that doesn’t define how the rest of the game or the rest of the series is going to go.”

For all of India’s excellence in their execution, this flat start by the hosts inevitably raises questions about how the English summer has been devised. Just two rounds of County Championship cricket followed the 1-0 defeat to New Zealand back in June, with only three of the top seven – Rory Burns, Dom Sibley and Zak Crawley – featuring in these.

Graham Thorpe, the England assistant coach, previously said he hoped two matches in the Hundred before this opening Test might free up their minds but clearly this was wishful thinking. And Trescothick gave the first admission from the coaching staff that their charges have indeed been compromised by the schedule.

Asked if their preparation was appropriate, the former opener replied: “Probably not, no. Scheduling is always an issue and, trying to get the balance right for the batters moving into Test series, of course you would want them to play a certain amount of red-ball cricket.

“We all appreciate that trying to get all the cricket in for what you need for players across the whole summer – county teams, The Hundred, all these competitions going on – there’s no easy solution to get this right and something always has to give.

“Of course we don’t want to use it as an excuse but we’d love to get more time into them at the crease – bowling with the red ball, facing the red ball. But it’s not the way so you have to find a way and get into it in a different fashion.”

The defining period came either side of tea when England lost six for 22, a collapse triggered by Jonny Bairstow’s removal lbw for 28 by Mohammad Shami. The floodlights came on during the interval and saw the Dukes ball zip around more, with Bumrah and Shardul Thakur then slicing through the lower order.

Trescothick said: “India are the most potent in comparison to where they have been for the past few years. They have a lot of bases covered. We saw them go to Australia and perform there, so it’s no surprise to us. It’s just challenging and we know it’s a real contest. We have to raise our game to match up against their skills.”

Thakur, preferred to the spin of Ravichandran Ashwin and vindicating this with the key removal of Root, added: “At some points we thought we may not get as many wickets as we got. Root is one of the top players in the world. Whether you get him out in the 60s or you get him out early in the innings, it is always a good wicket to have.”