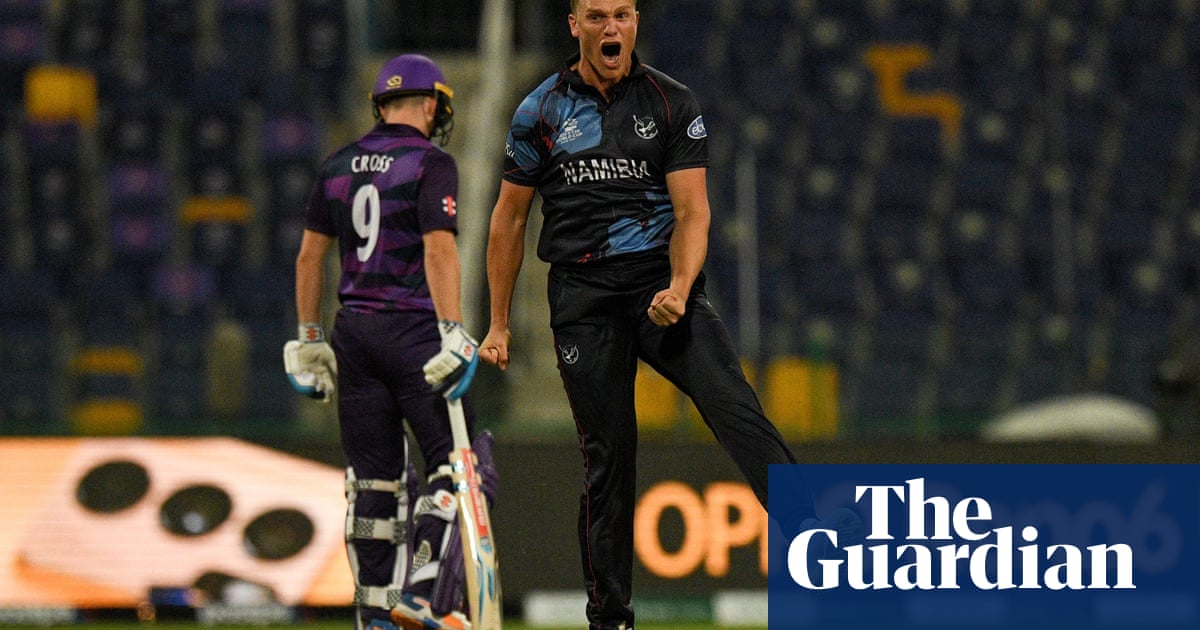 Scotland’s top order was blown away again in a devastating first-over blitz by the Namibia pace bowler Ruben Trumpelmann as they slipped to a four-wicket defeat at the T20 World Cup.

Kyle Coetzer’s side were skittled for 60 in a 130-run defeat to Afghanistan in their opening Super 12s match in Sharjah on Monday, having produced a brilliant run to reach the Super 12s.

And their batting unit was soon under pressure again having lost the toss, as Trumpelmann claimed three wickets in the first over to help restrict Scotland to 109 for eight, despite Michael Leask’s quick-fire 44.

Scotland gave themselves hope with a spirited bowling display, but JJ Smit saw Namibia to a famous win with an unbeaten 32.

Trumpelmann got Namibia off to a dream start, with the opener George Munsey bowled first ball, Calum MacLeod caught behind off the third and Richie Berrington trapped lbw off the fourth to leave Scotland two for three.

Craig Wallace was bowled by David Wiese to make it 18 for four in the sixth over before Matthew Cross and Leask steadied the ship. The pair had put on 39 before Cross was bowled by Jan Frylinck for 19 but, from 57 for five, the Scots dug in to give themselves something to defend.

Leask hit four fours and two sixes in his 44 off 27 deliveries, putting on 36 for the sixth wicket in partnership with Chris Greaves, before falling to Smit.

Greaves was run out for 25 after Mark Watt had departed for three and, with Josh Davey unbeaten on five, Scotland reached 109 after their 20 overs.

Scotland then began their fightback with the ball. After a steady start, the Namibia opener Michael van Lingen fell to Safyaan Sharif for 18 in the sixth over.

By the 13th over the Africans were 67 for four after Zane Green (nine), Gerhard Erasmus (four) and opener Craig Williams (23) struggled to make an impact.

But Wiese and Smit carried the side to the cusp of victory by putting on 35 for the fifth wicket before the former was caught behind off Leask for 16 to make for a slightly nervous finish.

Smit sealed the win with a six over point to spark jubilant celebrations and leave Scotland with two defeats from their first two Super 12s matches.

Coetzer’s side reached the main draw by finishing top of Group B after impressive wins against sixth-ranked Bangladesh, Papua New Guinea and Oman. Their three remaining games are against New Zealand, India and Pakistan.