61
Shares
Facebook24Twitter15WhatsApp3Telegram1
Linkedin1Pinterest5Tumblr1
The 9-day Jagannath Ratha Jatra began today. (File)Puri: Emotions spilled over and cries of 'Jai Jagannath' and 'Haribol' rent the air as the gigantic chariots of Lord Jagannath and his… 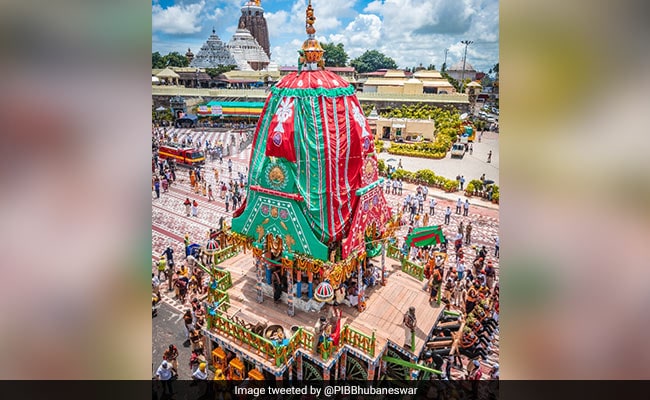 Emotions spilled over and cries of ‘Jai Jagannath’ and ‘Haribol’ rent the air as the gigantic chariots of Lord Jagannath and his divine siblings Lord Balabhadra and Devi Subhadra along with Chakraraj Sudarshan rolled for the nine-day Ratha Jatra festival in this sea-side pilgrim town today in the presence of lakhs of devotees, who were not allowed during the last two years due to the pandemic.

Sounds of gongs and cymbals reverberated in the air and devotees from across the country and abroad thronged the area around the Lion gate for a glimpse of the deities on the chariots.

Tight security ring was thrown and elaborate measures were made by the district administration and Odisha police to ensure smooth conduct of the festival.

Ratha Jatra, which marks the nine-day sojourn of Lord Jagannath and his siblings at the Gundichha Temple, is held every year on Dwitiya Tithi of Shukla Paksha in the month of Ashadha according to the Hindu almanac.

The enthusiasm among the servitors of the 12th century shrine of Lord Vishnu was visible as all the time consuming rituals were completed before the scheduled hour.

The ‘Pahandi’ or the ceremonial procession of the deities was scheduled to be held was 9:30 am but began at 7 am. The rituals like ‘Mangala Alati’, ‘Abakash’, ‘Sakala Dhoopa’ and ‘Mangalarpan’ were also completed much before the schedule, an official of the Shri Jagannath Temple Administration said.

‘Bada Thakuara’ or Lord Balabhadra, was the first to come out of the sanctum sanctorum of the temple followed by Devi Subhadra, Lord Sudarshan and Lord Jagannath in a ceremonial procession called Dhadi (Line) Pahandi. The Pahandi of all deities was completed by around 9 am.

The deities were seated on their chariots – ‘Taladwaja’, ‘Darpadalan’ and ‘Nandighosh’ much before the schedule time amidst cries of ‘Jai Jagannath’.

Puri Shankaracharya Swami Nischalananda Saraswati along with his selected disciples had a darshan of the deities on the chariots as per tradition. This was followed by Puri’s titular king Gajapati Maharaja Dibyasingha Deb performing the ‘chhera pahanra’, the ritualistic sweeping of chariots with a golden broom. The pulling of the chariots began after it.

“Best wishes to all on the auspicious occasion of Rath Jatra of Lord Jagannath. I pray for peace, happiness and prosperity in everyone’s life with the blessings of Mahaprabhu Jagannath,” Kovind said in a tweeter post.

PM Modi tweeted “Greetings on the special day of Rath Jatra. We pray to Lord Jagannath for his constant blessings. May we all be blessed with good health and happiness.”

Odisha Chief Minister Naveen Patnaik, who returned from a 11-day foreign tour on Thursday night, tweeted “Wishes to all on the auspicious occasion of Rath Jatra.”