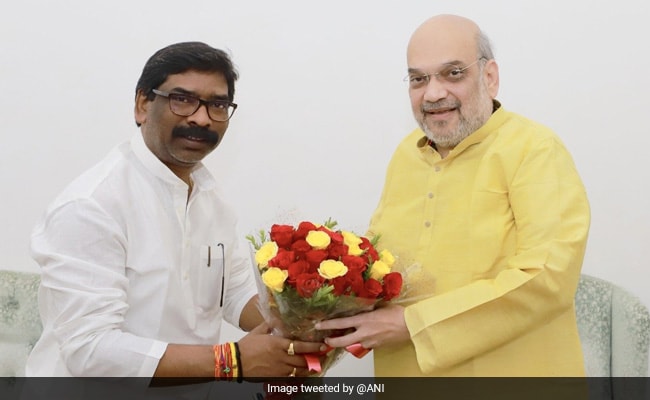 The Presidential election are scheduled to be held on July 18.

As per the information, it is believed that Mr Soren met with Amit Shah and Mr Kharge to reach a conclusion on extending the Jharkhand Mukti Morcha’s support for a presidential candidate.

A meeting of the JMM leaders, including all the MLAs and MPs of the party, was held on Saturday, under the leadership of its supremo Shibu Soren, wherein it was decided that JMM’s Executive President Hemant Soren will meet the Home Minister.

Even though the meeting took place, the party’s stand on the matter remained unclear.

It would be interesting to know whom would the JMM support in the upcoming Presidential elections, as its ally United Progressive Alliance (UPA) has fielded Yashwant Sinha as the candidate, while the candidate hailing from the Santhal community, Droupadi Murmu, has been nominated by the BJP-led NDA.

JMM has been pursuing a tribal political plank and Santhals have been the significant vote bank for the party. Shibu Soren, the party’s president, emerged as a Guruji by agitating against Mahajani Pratha from Santhal and he spearheaded a separate state movement with the support of Santhals.

A day after filing her nomination papers for the presidential election on June 24, Ms Murmu had called up Jharkhand Mukti Morcha chief and state Chief Minister Hemant Soren seeking his support.

On June 25, the JMM had called a meeting of all its legislators to take a decision on whether they would support her in the presidential election. However, as per the sources, the meeting remained inconclusive.

JMM was among opposition parties which earlier extended its support to former Finance Minister Yashwant Sinha in the presidential election. But, since the NDA named Droupadi Murmu, a leader from the tribal community, pressure has been mounting on several opposition leaders including the Jharkhand Chief Minister to extend the support to Ms Murmu as Jharkhand has a lot of tribal population that could affect their vote bank.

The elections for the President of India will take place on July 18 and the results will be out on July 21. The term of present Rashtrapati Ram Nath Kovind concludes on July 24.