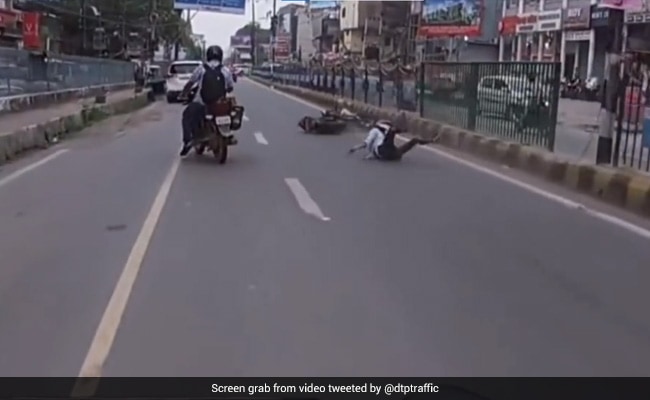 The the video, Delhi Traffic Police urged people to highlight the importance of road safety.

The Delhi Traffic Police has posted a video of a young man performing dangerous stunt on a motorcycle on Twitter to urge people to stay safe and not drive too fast. The 36-second video, credited to YouTube, doesn’t specify where it has been shot but shows the stunt of the biker being recorded by a motorcycle rider behind him. Since being posted about half an hour ago, the clip has been viewed more than 1,300 times. Users have appreciated the “fresh mode of campaign”, lauding the traffic police for delivering a powerful message in a funny way.

As the video starts, a man is seen driving his motorcycle in a rash manner on a road which is less crowded. A Hindi song “Meri Marzi” plays in the background as the impatient rider makes a quick dash between the vehicles in front of him.

The video then cuts to the rider losing his balancing and slipping on the road. After the dangerous stunt, his bike is seen shaking moments before he falls on the ground. Fortunately, the man is wearing a helmet but his head narrowly escapes hitting the silencer of another motorcyle. His bike, meanwhile, drags for a few metres before coming to a stop.

The video then shows a garlanded photo frame with the message “He used to perform bike stunts” – a warning that such things can have fatal consequences.

“This is lit,” a user commented. “Speed thrills but kills,” said another.

“Those who still haven’t understood can try (the stunt) again after watching the video. Such people are great, when the police fines them they blame the administration,” another comment read.

They used Kareen Kapoor Khan’s iconic character Poo from Kabhi Khushi Kabhie Gham to make sure that people pay heed to the appeals. The department posted a video of a traffic violation on its official Twitter page which, other than the vehicle, also featured Poo.