61
Shares
Facebook24Twitter15WhatsApp3Telegram1
Linkedin1Pinterest5Tumblr1
Neeraj Chopra won a silver medal in the event with a career-best throw of 89.94 metres.Javelin thrower and Olympic gold medalist Neeraj Chopra recently made the entire country proud by… 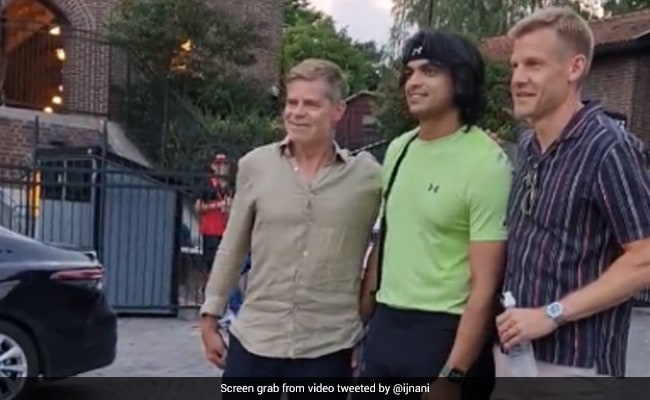 Neeraj Chopra won a silver medal in the event with a career-best throw of 89.94 metres.

Javelin thrower and Olympic gold medalist Neeraj Chopra recently made the entire country proud by breaking his national record while competing in the Diamond League in Stockholm, Sweden.

For the second time in a month, the Tokyo Olympics winner broke his personal record at the Stockholm Diamond League. Neeraj won a silver medal in the event with a career-best throw of 89.94 meters.

And now, he has won the hearts of the people again by touching the feet of an elderly man who came to congratulate him. A video of his heartwarming gesture is going viral on social media where Mr Chopra is seen interacting and clicking photos with a group of fans in Stockholm. An elderly man was part of that group, and as soon as he congratulated the Tokyo Olympic champion, he reciprocated by touching his feet.

So down to earth this person @Neeraj_chopra1 ️Took blessing from an elderly fan. That speaks volumes. Love you ️ pic.twitter.com/jjo9OxHABt

He also told his Indian admirers that he has to leave since his bus is waiting for him. The elderly man is heard encouraging Neeraj that he will reach the 90-metre mark on his next outing.

“Agli baar 90 se uppar jaayega (Next time, you will definitely throw over 90 metres),” the man said.

The clip has been widely shared on Twitter which shows people wishing Mr Chopra good luck for his future to which he responds in a polite manner, saying “Dhanyawad (Thank you)”.

The post has garnered several comments and has received over 2 lakh views and over 11,000 likes on Twitter. Users can be seen appreciating his gesture in the post’s comments section.

“Niraj makes us proud of him on and off the field also….may he remain grounded,” wrote a user.

While another simply said, “Respect.”

A third wrote, “Such a humble human.”

Neeraj Chopra is only the second Indian to finish in the top-three of a Diamond League meet after discus thrower Vikas Gowda.

Gowda, a 2014 Commonwealth Games gold medalist who retired in 2017, had four top-three finishes in Diamond League events during his career. He had finished second in New York in 2012 and Doha in 2014, and third in Shanghai and Eugene in 2015.