59
Shares
Facebook23Twitter14WhatsApp3Telegram1
Linkedin1Pinterest5Tumblr1
Russian troops have destroyed a school, the town hall and several homes in Kutuzivka.Kutuzivka, Ukraine: "We put a cross for every day spent here alive," says Nadia Ryjkova, 76, in… 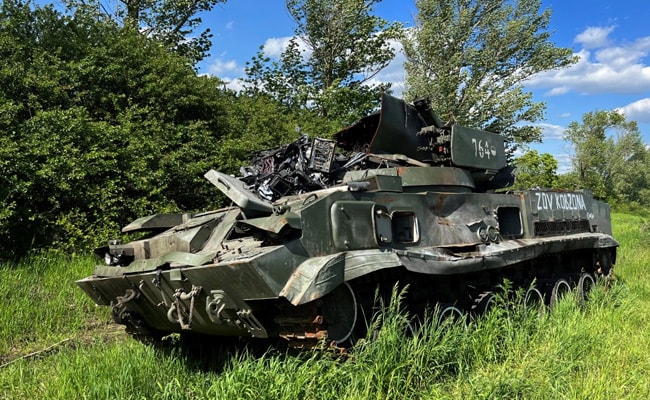 Russian troops have destroyed a school, the town hall and several homes in Kutuzivka.

“We put a cross for every day spent here alive,” says Nadia Ryjkova, 76, in a dark underground shelter in the northeastern Ukrainian village of Kutuzivka, where she lives with about 50 people.

Ryjkova points to the calendar marked with red crosses since February 24, the day Russian began its invasion of Ukraine, before stroking her stretching cat, Murchik, (“Purrer”).

The beds in the shelter are lined up in three large rooms where most residents are elderly women.

Electric wires hang from the concrete ceiling, connecting a few dim lightbulbs to car batteries placed under some chairs.

A wood-burning stove emits a stifling heat, but away from the fire, a cold damp air envelops the surroundings.

But Marfa Khyjniak, 72, is happy with this austere comfort, after countless shells fell on the village of 1,500 residents on March 25 at the start of Ukraine’s counter-offensive.

“It was frightening, I was so scared. There are no words. It was unbearable. I was sitting in my bathroom and I was praying. Then I came here for refuge. Even a small space, a chair would have been enough for me,” she says.

“Today some return to the village but what for? Everything is destroyed,” Khyjniak adds, shedding a few tears before explaining she has suffered “depression” and is taking medication.

Without a telephone connection, she has no news of her children and loved ones, but reassures herself: “I live with hope that they are alive. It’s the only thing keeping me alive.”

Russian troops ended their push for Kharkiv but they maintain positions east of the city, firing on the eastern areas and the neighbouring villages. Artillery exchanges continue, especially at night.

The bombardments have destroyed a school, the town hall and several homes in the past few days during the Russian advance and the counter-offensive by Ukrainian forces.

“It’s dangerous for sure. Shots are fired, there is shelling, but we’re used to it. We don’t pay too much attention to it anymore,” says Vlad, 35, a tractor driver, while delivering a tank of water to the shelter’s residents who rush to fill their cans and bottles.

“Before, they had to fetch water from the well.”

Hundreds of metres from the shelter, soldiers get some well-deserved rest in a house which has been hit by a shell, leaving a gaping hole in a wall.

Despite some sporadic cannon fire, the atmosphere is calm with men and women lounging on chairs. They have returned from the front line around 20 kilometres (12.5 miles) away.

“It’s raging on the front line. Very hot. We were there for seven days, I don’t really remember, for me, it was like one long day,” says Laska, a 36-year-old military nurse.

A businesswoman preparing to study for a science doctorate before the invasion, she gave it all up to help the war effort.

“I don’t see what else I could do. Everyone must volunteer or defend the country,” she says, waiting for the call to return to the front.

“I’ll go back for sure, as soon as the orders come in. Our guys are there, we can’t leave them alone!” Laska says.

In the same place, the battle-hardened deputy squadron leader nicknamed “Chekist” has much fighting experience.

“I spent a lot of time in the war. It’s my job. I defend my native country,” says the soldier who has fought against pro-Russian separatists in eastern Ukraine since 2014.

When “I am fighting, images of my children appear and I know then why I am fighting,” he says, adding that the Ukrainian army was now calling on young, inexperienced soldiers.

“Many come and they have never held a gun. Before, we could train them but right now, they learn on the front. Unfortunately, we lose a lot of people,” he says as he lights a cigarette.

But he remains defiant.

“We will win the war. It will be hard but our morale is unbreakable. Unbreakable! Unbreakable!” he says. “We will not give in.”