61
Shares
Facebook24Twitter15WhatsApp3Telegram1
Linkedin1Pinterest5Tumblr1
Vladimir Putin coming out of a frigid lake in Russia after a religious ceremony in 2018. (File Photo)Russian President Vladimir Putin has said that western leaders, including British Prime Minister… 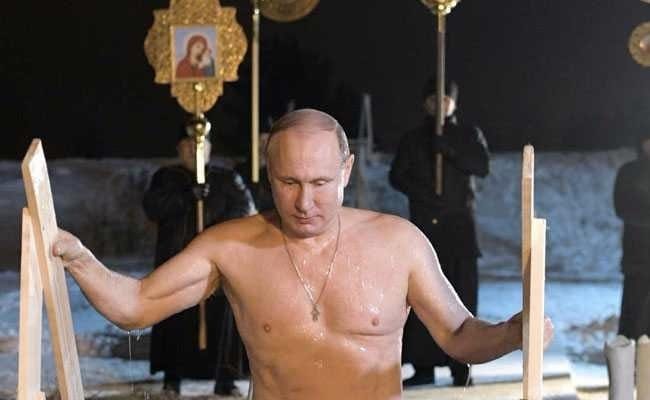 Vladimir Putin coming out of a frigid lake in Russia after a religious ceremony in 2018. (File Photo)

Russian President Vladimir Putin has said that western leaders, including British Prime Minister Boris Johnson, would look “disgusting” if they try to copy him and pose topless. Mr Putin made the remarks during a press conference in Turkmenistan on Thursday, hitting back at Mr Johnson who mocked the Russian leader at the G7 summit, according to Independent.

“I don’t know how they wanted to get undressed, above or below the waist,” the Russian President said when asked about UK Prime Minister’s comments. “But I think it would be a disgusting sight in any case,” he added.

Mr Putin said that unlike him, western leaders abuse alcohol and don’t do enough sporting activities. “It’s necessary to stop abusing alcohol and other bad habits, do physical exercise and take part in sports.”

Earlier this week, Mr Johnson had joked that G7 leaders could take their clothes off to “show that we’re tougher than Putin” amid the ongoing tension between Russia and Ukraine.

He had further said that we need to “show our pecs”.

Mr Putin also rejected Mr Johnson’s charge that if he were a woman he would not have invaded Ukraine.

Speaking at the same press conference in Turkmenistan, the Russian President pointed to former British leader Margaret Thatcher’s decision to send troops into the Falklands as a rebuttal of Johnson’s theory.

“I just want to recall the events of recent history, when Margaret Thatcher decided to launch military operations against Argentina for the Falkland Islands. So, a woman took the decision to launch military action. Therefore, it’s not an entirely accurate reference from the British Prime Minister to what is happening today,” he said.

Mr Johnson had on Wednesday dubbed Mr Putin’s decision to launch what Moscow calls a “special military operation” against Ukraine a “perfect example of toxic masculinity”.