60
Shares
Facebook23Twitter15WhatsApp3Telegram1
Linkedin1Pinterest5Tumblr1
Nitish Kumar has a strained relationship with ally BJP.Patna: In yet another snub to ally BJP, Bihar Chief Minister Nitish Kumar today said he doesn't understand how anyone can change history. "History is what it is, how can anyone change it?" he said when asked to comment on Home Minister Amit Shah's remark that it's… 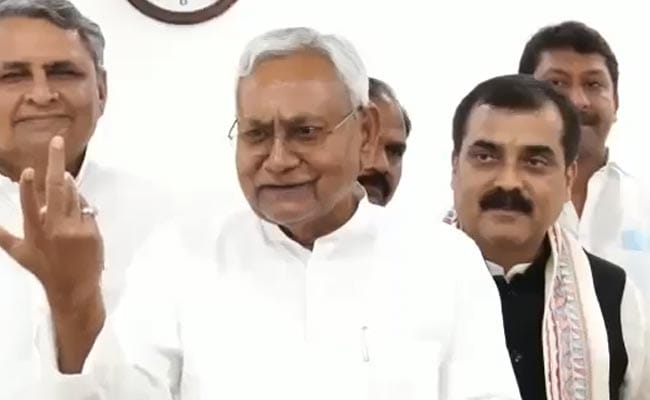 Nitish Kumar has a strained relationship with ally BJP.

In yet another snub to ally BJP, Bihar Chief Minister Nitish Kumar today said he doesn’t understand how anyone can change history. “History is what it is, how can anyone change it?” he said when asked to comment on Home Minister Amit Shah’s remark that it’s time to revisit history books as historians have focussed only on Mughals so far, ignoring other glorious empires.

“Will you change history then? I don’t understand how one can change it. History is history,” he said, amused, when a reporter asked what he thought of Mr Shah’s suggestion.

Language is a different issue but you can’t change the fundamental history, he said when prodded on the Home Minister’s insistence that Mughals have been given disproportionately more importance in history books.

Mr Shah had recently appealed to historians in the country to resuscitate the glory of the past for the present, saying that it will help in building a bright future.

The Home Minister said that history does not depend on government and that “truth comes into existence if historians start writing correct facts about those who could not get proper space in history”.

Most of the historians in India have given prominence to recording the history of Mughals only, ignoring the glorious rules of many empires like Pandyas, Cholas, Mauryas, Guptas and Ahoms, Mr Shah had said at a recent book launch.

In what was seen as another strong message to ally BJP, Nitish Kumar had recently asserted that there was “no need” for an anti-conversion law in the state where the government was “alert” and members of different religious communities lived in peace.

Top BJP leaders like Union minister Giriraj Singh have been pushing for an anti-conversion law.

Mr Kumar’s strained relationship with the BJP, which he has many ideological differences with, has become increasingly public as he fights to hold his ground against the aggressive ally. Mr Kumar has not been on the same page with the BJP on issues such as the Ram temple in Ayodhya, abrogation of Article 370, Uniform Civil Code, triple talaq, NRC and legislative measures for population control.

Even on the issue of caste census, even though the BJP has come on board now Mr Kumar faced great resistance initially.

BJP leaders, including some ministers in the cabinet, have been alleging that many “Rohingyas” and “Bangladeshis” have sneaked into Bihar and care must be taken not to legitimise their stay by including them in the state-level headcount of castes.