58
Shares
Facebook22Twitter14WhatsApp3Telegram1
Linkedin1Pinterest5Tumblr1
Biplab Deb was shunted out a year ahead of Tripura electionsAgartala: BJP leader Biplab Kumar Deb, shunted out as Tripura Chief Minister in a sudden move by the party leadership, has told NDTV that he will keep performing his duty as a disciplined soldier of the BJP and that the party will decide the next… 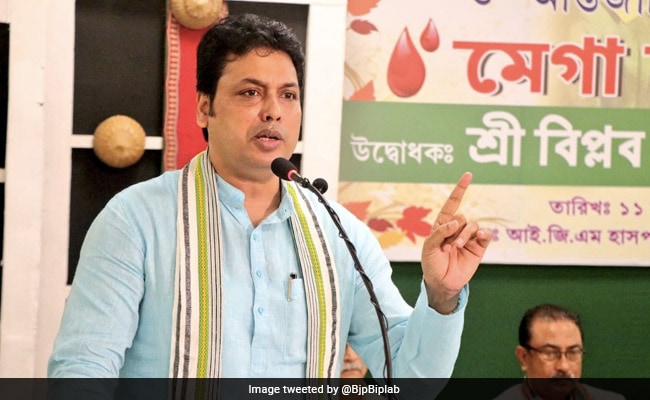 Biplab Deb was shunted out a year ahead of Tripura elections

BJP leader Biplab Kumar Deb, shunted out as Tripura Chief Minister in a sudden move by the party leadership, has told . that he will keep performing his duty as a disciplined soldier of the BJP and that the party will decide the next step for him.

“I will perform my duty, in whatever new role the party leadership gives me. I cannot decide, it is the party that will decide the next step for me. I will follow. We are disciplined soldiers of the BJP,” he said.

In a political development that left many surprised, Mr Deb handed over his resignation to Tripura Governor Satyadeo Narayan Arya yesterday, a year ahead of the Assembly polls.

The meeting saw dramatic scenes as many MLAs were upset that they were not consulted about the change and the BJP leadership took the decision abruptly. One of the MLAs, Ram Prasad Paul, also broke a few chairs to protest the move.

However, he said, Tripura has a stable government now and with the election due next year, he must start working at the grassroots level.

“The government is very stable now and with the election coming, it’s time for me to hit ground zero,” the 50-year-old leader told ..

Appointed state BJP chief in 2017, Mr Deb led the party’s campaign in the 2018 Assembly polls, when the BJP ended the Left Front’s 25-year rule in Tripura. During his four-year tenure in the top post, Mr Deb made headlines with a series of controversial statements that left the party red-faced.

Mr Saha, who will succeed Mr Deb, is a 69-year-old dental surgeon-turned-politician. This March, he was elected to Rajya Sabha from Tripura’s lone seat.

A professor and head of the department of Tripura Medical College and BR Ambedkar Memorial Teaching Hospital in Agartala, Mr Saha joined the BJP in 2016. He is also the president of the Tripura Cricket Association.

Known to be close to Mr Deb, Mr Saha was appointed the president of the state BJP unit last year.